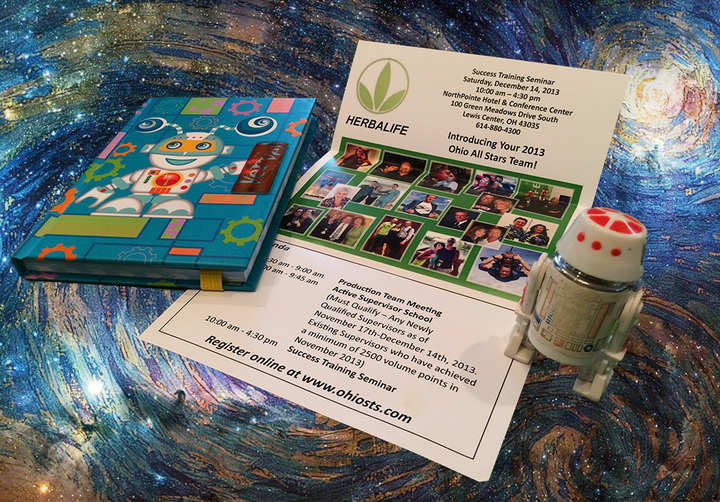 “Attend EVERY event” :: Herbalifers are told … at every event. I’m too busy doing _____________ {insert anything else} to satisfy the EVERY standard :: but I did attend ONE event … which went way better than my Herbalife job interview. Here’s my staccato summation of an all day event at Herbalife …

we are a family clapping

your life was changed

There is an expensive Herbalife event EVERY month of the year :: and distributors who want to succeed are expected to attend them all … with guests in tow. 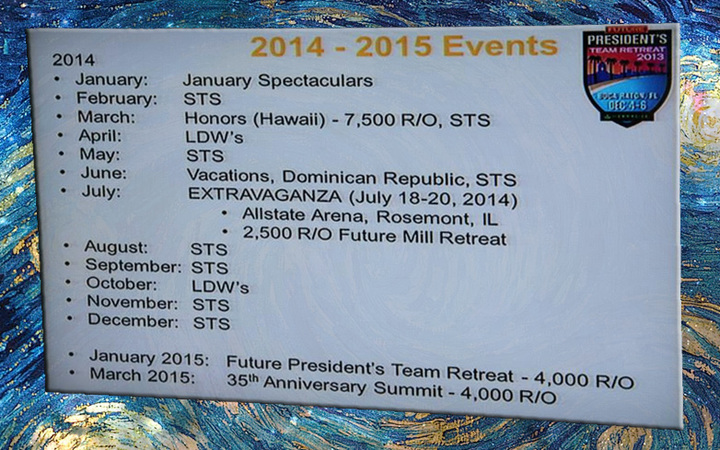 Approximately seven of the twelve yearly events are regional “Success Training Seminars.” Priced at $30 to $50 :: the STS is cheaper than the other large Herbalife events {which cost double or more} … but it certainly ain’t cheap. A victim sucked into the Herbalife fraud vortex can expect to lose thousands of dollars each year keeping up with the event cycle.

Distributors generate new prospects by availing themselves to one of the currently approved “Daily Methods of Operation” {DMO’s} :: stuff like …

… but these things aren’t actually the business :: they are just the advertising. 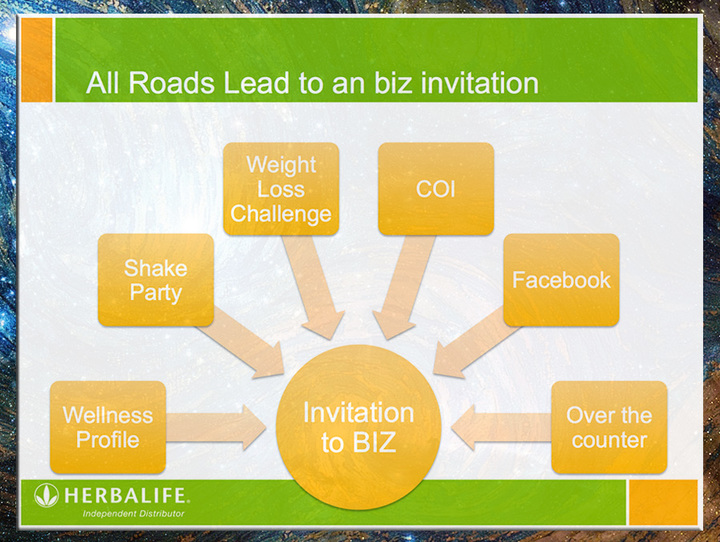 Ground level recruiting generates the grist for the people mill :: but the serious grinding gets done at the systematized seminar series … which swirls constantly around these daily methods like a hungry hurricane. The seminar series supports … the biz op … the biz op … and the biz op. Commitment :: belief :: intoxication :: addiction :: euphoria … primal and dangerous shit getting stirred up as a way to sell people on the impossible. The seminar series is where you go to decide it’s a good idea to risk/give everything :: for a chance at NOTHING … something you would never do alone.

The overarching seminar series dates to basically the beginning of Herbalife :: and in the panic of recent years … the company has become more reliant on it than ever. Here they are explaining it to each other … 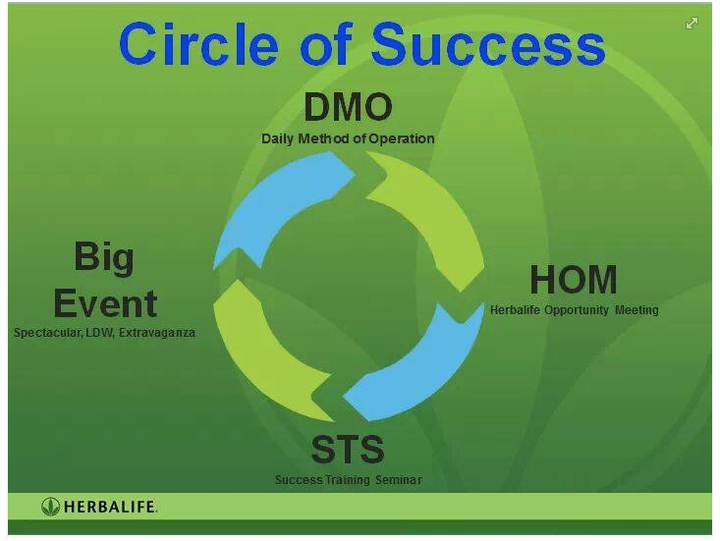 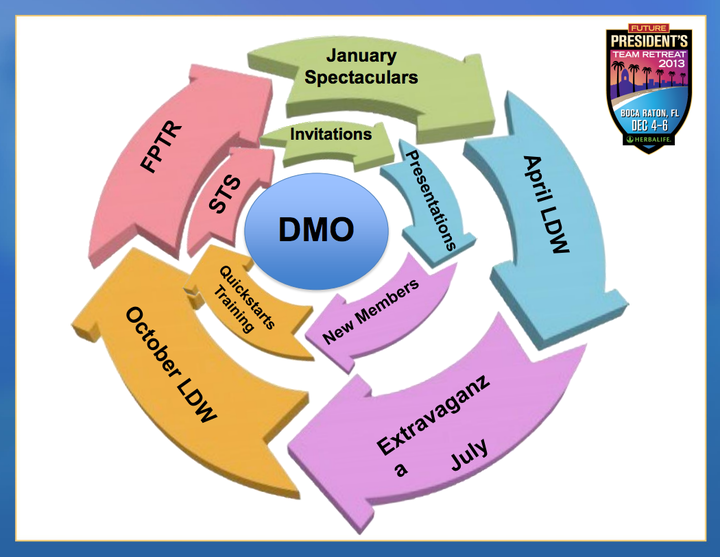 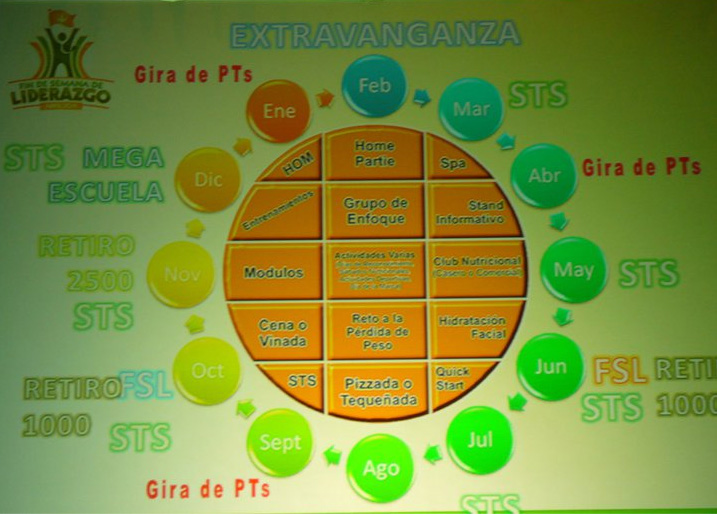 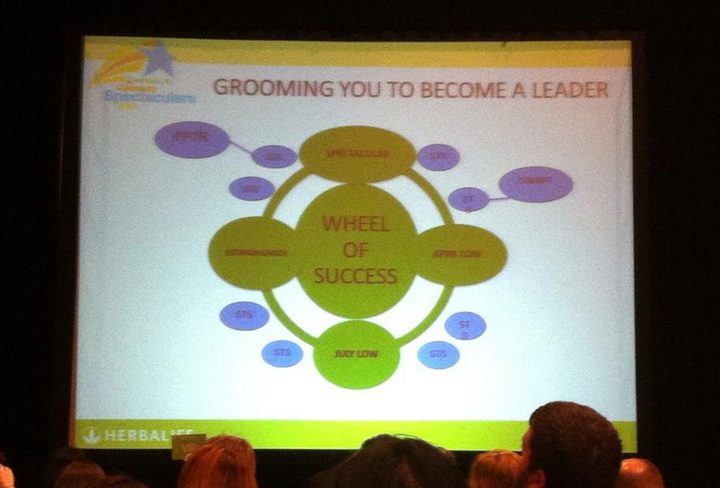 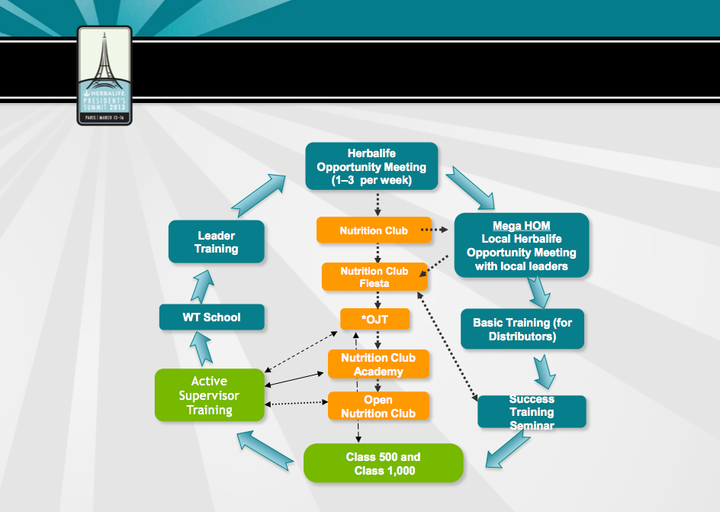 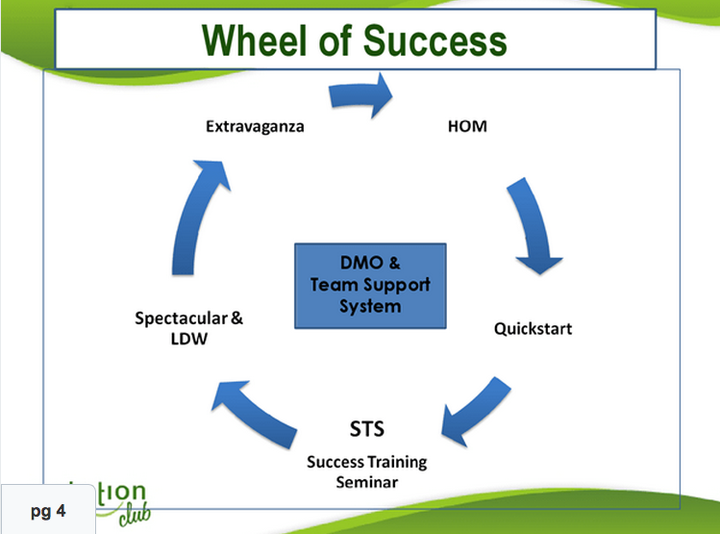 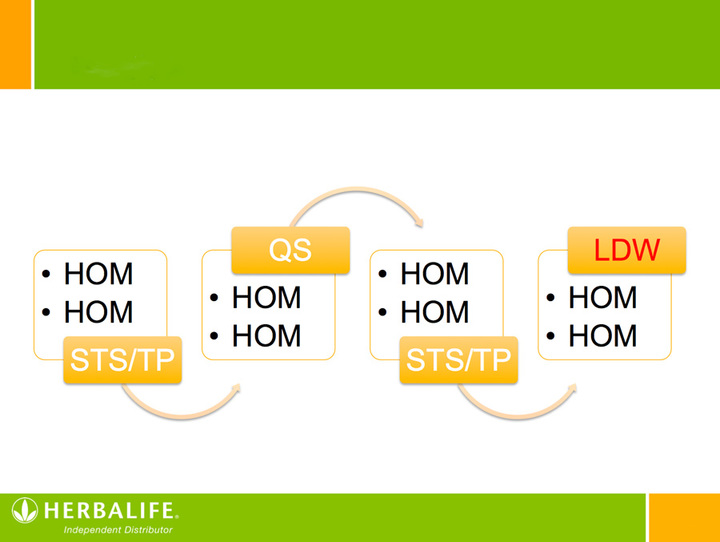 … the wheel of circle success :: pyramid.

Guests attend free :: advertises the website for the Ohio regional STS … which is held each month in my newish hometown of Columbus. I didn’t think I’d make the guest list by telling the truth …

… so I hatch a cover story prior to my arrival. A couple of my bestest bros have been trying to recruit me into The Vemma :: and while I’m very interested in the infinite loop income opportunity … I thought I better check out some of the MLM competition before signing up as a juice based brand ambassador.

The unpaid labor working the registration table seemed stunned that I was there without a sponsor :: like it had never happened before … I feigned naiveté and told my bullshit story … they gave me some free crap and let me pass. An obnoxious Lady Gaga-esque clatter was echoing out to the lobby :: this was going to be awesome … in the worst fucking way. 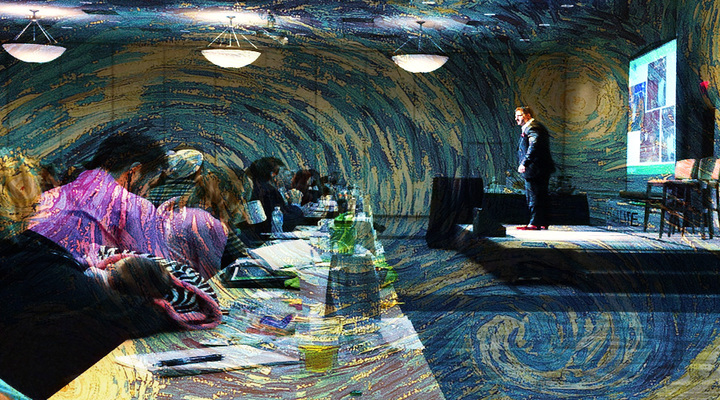 There are 268 people in the room :: 120 of them are “guests” … though I don’t know how they counted the babies. Distributors can qualify for the VIP tables positioned in front by doing 7500 volume points in the month prior to the event :: a seating arrangement which ensures maximum visibility for the most fervent and committed shills … their enthusiasm manufactured but infectious.

“Oh my gosh people just like me are making it to the VIP table. They’re so happy, and excited, and important. This is real. I can do this.”

The VIP’s conspicuously prepare and consume Herbalife products throughout the event :: it feels strange … the room quickly runs out of water.

There are no seats left in steerage … so I sit on the VIP floor until extra chairs arrive and I’m sat to the side of the VIP tables. I can look left and see a sea of faces … the sad/lost faces of the people to whom I’ve become accidentally devoted. I want to save them :: they want to leave my body in a dumpster … we agree to disagree.

The STS is a standardized production. Speaker names change :: but it’s the same basic event month after month … year after year … all around the globe. Much of the structure is directly attributable to Herbalife founder Mark Hughes. Event organizers are admonished to stick with the standard model :: “it works … don’t reinvent the wheel.” In 2013 some 90,000 people in North America were churned through the standard Herbalife STS.

This slide :: from a presentation given to high level Herbalife distributors … bullets the Mark Hughes “philosophy” for the Success Training Seminars {which were held three times a week in the early years} …

80% inspiration :: 20% information … bring your own imagination.

If you tear down all the multicolored facades that line Scamworld’s main streets :: exposing the naked reality of what’s really being sold for hundreds of billions of dollars per year … “if they can do it” is what you’ll find at almost every address. It’s what Frank Kern memorably called the “low self-esteem success chance.” Get the prospect thinking :: “if I can do just one tenth as well as this guru is doing” … and you’ve got them hooked.

Here’s Christopher Reese :: a regular on the STS speaking circuit … over-compensation-cuddling with the 2015 Corvette Stingray he’s currently boasting about in his marketing. 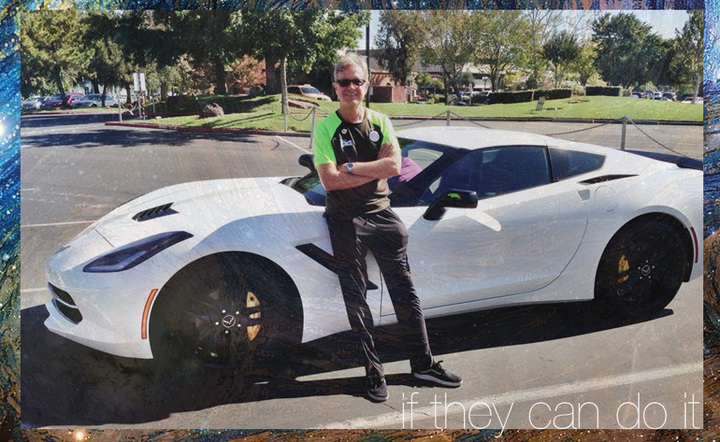 The Herbalife prospect is thinking …

OMG … he did that? Well if I made this investment … then surely I could at least afford a new Kia Optima. That would make such a huge difference for my family!”

Kern has a fucking formula for it even …

At Herbalife :: the social proof is overwhelming … the actual proof is nonexistent. The Herbalife event series :: and the STS in particular … have social proof gaming down to a science. Every person who picks up the mic :: as many as one hundred people over the full day … has an extraordinary tale of grand health and rapid financial success. It’s utterly relentless.

The event starts {and middles … and ends} with a reminder that we should buy our tickets for the next STS :: today … right now. Ticket purchasers are entered into a drawing for Herbalife product prizes that are distributed throughout the day with much fanfare. 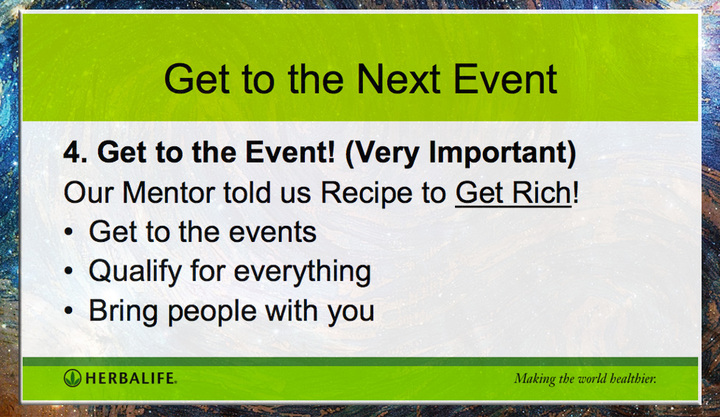 “Stand up if you’ve lost more than ten pounds on the products.”

… etc. etc. etc. Most of the not new people are standing :: they are all invited to come on stage and share their product success stories. It’s the first of the day’s parades of proof :: there will be many more … but this one takes the longest.

… you might lose a couple of pant sizes just listening to it.

There is a lot of talk about the products at these seminars :: but they’re training distributors how to NEED the products … not how to sell them.

If you don’t have a product success story … you won’t be able to succeed financially.

Take ALL the products.

They preach a religious devotion to product consumption … the retail sales are just supposed to kinda effortlessly trickle down from there.

“Stand up if you made $100 :: $500 :: $1000 … in the last month.” Woots :: clapping :: hallelujah … and so begins the income claim unicorn parade. It seems everyone in this room who is not a guest {or a SaltyDroid} has already been super successful with Herbalife.

My fake robot reporter notebook is adorned with cute little robots and some stickers :: because … fuck yeah it is! I start logging the income claims with pen and paper like our forefathers in the 1970’s …

Yada yada … it keeps up like that. There’s a results not typical disclaimer projected on the screens behind the stage … I guess for irony.

Dr. Dominic Fabrizio and his wife Shayna Fabrizio {then Millionaire Team now President’s Team} are the organizers of the Ohio STS. They have a chiropractic clinic {where they sell Herbalife} :: and an Herbalife nutrition club … in Tiffin Ohio.

“Dr. Nick” introduces himself to me and takes the seat next to mine. He asks if I’m a reporter :: I think my cover is blown … but he’s just making a joke about my diligent note taking. We talk about Herbalife and Vemma while the success parades continue on stage. He’s recruiting me … I’m pretending it’s working. He takes my phone number and invites me to meet with his team during the lunchtime breakout sessions.

There are some lil’ speeches about :: and cheers for … our imminent success at the team breakout. We’re joined by the day’s featured speaker {old-man-muscle-head} CJ Matthews :: who says a few dumb words … and then we snap a team photo. 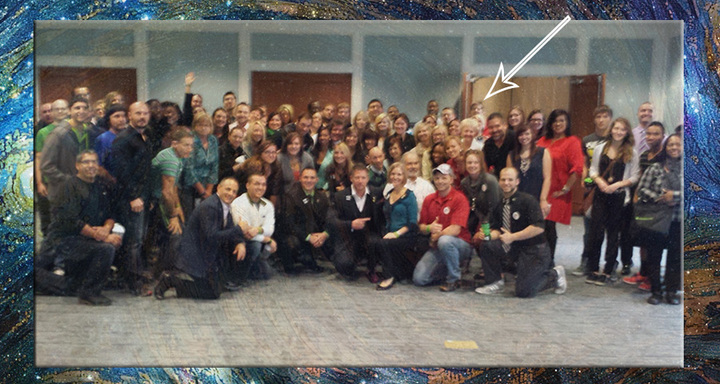 I go out to my car laughing :: and eat some real food for lunch … in protest.

After lunch they walk us through the glory of every level of the marketing plan. Anyone who has achieved a new level since the last event is brought up on stage. Income :: infinity … clapping. CJ makes a speech about how great :: and successful :: and ripped :: he is … and you can too! He tells us that Herbalife events are repetitive :: but that they’re for the new people … and we need to attend them all if we want to succeed. There’s a really long story about how great are his expensive red shoes … unfortch I don’t have any rotting cabbage to throw at him.

I wasn’t able to take much video footage :: but I got enough :: because almost everything said and done at these events is ridiculous … manipulative … and in violation of all sorts of consumer protection laws. Turn on a camera during any given moment … record shenanigans.

Herbalifers call this idea that an Herbalife business should revolve around attending events :: “plugging in” … because calling it “brainwashing” would be awkward for infinity recruiting. There is a DIRECT CORRELATION between the number of people you bring to the events :: and the amount of money you make in the Herbalife MLM … as this slide explains rather too honestly. 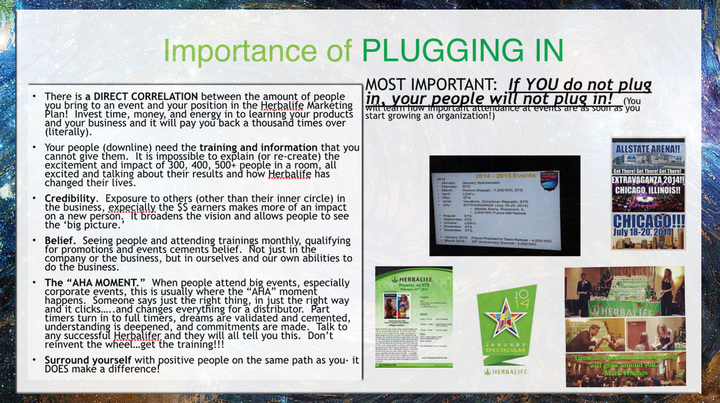 It is impossible to explain (or re-create) the excitement and impact of 300, 400, 500+ people in a room, all excited and talking about their results and how Herbalife has changed their lives.

It’s true :: it’s not quite possible to explain it … it feels like an emotional church service. People are crying :: and hugging :: and getting each other’s autographs {wtf?} … the wooting is off the charts. I am who I am :: and all that comes with that … but I could still feel the feeling in this room. That strange electricity that can only be created by a pack of humans :: believing … together.

Part timers turn in to full timers, dreams are validated and cemented, understanding is deepened, and commitments are made.

People aren’t churning through these events in their hundreds of thousands to learn about being better discount customers à la Costco :: these manipulation events sell admittance to :: and progression through … the Herbalife biz op experience. 99% of Herbalifers fail :: but Herbalife events contrive a cultish culture where 0% of those failures are represented … and all dissent and doubt is expelled. 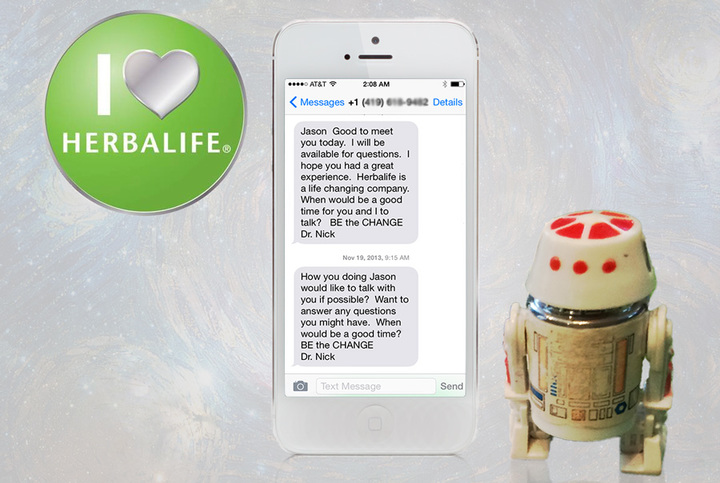 Dr. Nick wasn’t the only person to try to recruit me that day :: but he was the one who followed up … something he now regrets.

Nick and his wife Shayna had done passable impressions of nice people … lacking the reek of scammer that I’m so adroit at sniffing out. When he called me :: I told him who I was before he embarrassed himself … and I apologized for the pretending. We had a good talk :: off the record … and I still thought he was a nice guy. But like so many things Herbalife … research proved otherwise.

Herbalife’s biggest sin lies not in deceiving its victims … but in making deceivers of its victims.