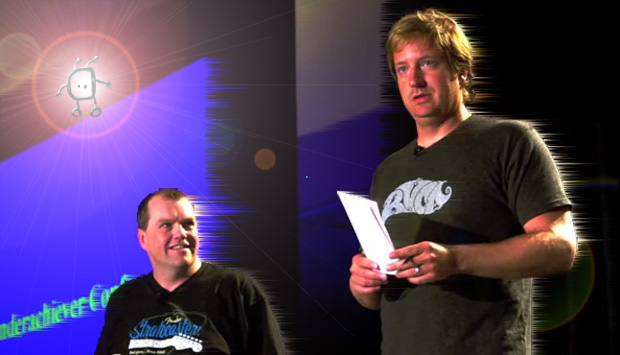 Ed Dale is the Underachiever {dot com} :: or if you prefer … he’s the Tubby Nerd. Both of his nom de plumes attempt at conspicuous self-deprecation :: but end up as self-aggrandizement … due to the pathetic condition of Ed Dale’s temporal realities.

“Underachiever” wrongly implies that at least something has been achieved. And while “tubby” is clearly true enough :: being a “nerd” requires more than buying an iPad and using Facebook to rip off a bunch of grannies.

I’m thinking something like UnderTubby would be more accurate :: more descriptive … and more fun.

UnderTubby got his start in Internet Marketing by sidling up to Irwin Frank Kern. Kern had just finished giving all his money to the FTC :: and he needed some mores … so he and Dale released the Underachiever Method. A frauduct that disappointed anyone with any reasonable expectations. UnderTubby’s primary selling platform :: the 30 Day Challenge … oozed up from remains of the Underachiever Method.

The 30 Day Challenge is one of the most unique marketing experiences on the entire internet. Here you will have the opportunity to join a tightly bound community that will encourage and assist you in creating a niche product that you can sell to insanely passionate people.

You will learn to identify a hot market, and sell them exactly what they want. Follow along with Ed Dale and Frank Kern as they teach you the ropes of finding, creating, and selling niche products online.

Let’s preserve the great community we have and all work together for mutual gain.

But Frank was never much a part of it {cause he was busy growing out his hair and his syndicate} :: the tubby bridesmaid had to peel himself off … and go it alone.

30 Day Challenge came to be billed as place where noobs could dip their toes into the Internet Marketing waters :: and get a taste of some of them sweet monies … without spending any of their own money.

We hate get rich quick, this is not what the Thirty Day Challenge is about. This is about creating a brilliant business one step at time - slowly and surely. Putting in effort as opposed to cash. So that people have a chance to doing something online without getting exploited by bastards who take a couple of grand from you and teach you something that could never work.

The 30 Day Challenge’s free educational awesomeness consists of Edward Wells Dale talking :: all puffy faced and shit … into a webcam ad infinitum. Web 2.0 :: tweets … the works. Just a little service that UnderTubby is providing to humanity :: supported {of course} by selling expensive membership programs :: expensive seminars … and expensive affiliate offers from “bastards who take a couple of grand from you and teach you something that could never work.”

That’s how Ed Dale makes his motherfucking money online :: and you can too!

But if buying a bunch of fucking crap so that Ed Dale can get paid hasn’t yet led you to Frank Kern type riches :: then mayhaps you need some of Ed’s personal $5000 one-on-one mentoring …

The program’s been discounted from $10,000 :: so that’s why Ed didn’t feel like he needed to put on a clean shirt. He’s standing in front of a television slideshowing pics of his children :: explaining how Internet Marketing is all about who you know. If you pay to know Ed Dale :: then you’ll know Ed Dale … so how could you fail?

But don’t get too excited :: because as the 30 Day Challenge earnings disclaimer clearly SHOUTS …

In 2010 UnderTubby decided that the 30 Day Challenge’s not typical success had been so successful :: it needed to be “taken public.” As a public company :: Dale reasoned :: 30DC could raise money from investors … and then use stock instead of cash to buy up other successful web companies. It’s an easy win-win :: and it only sounds stupidly simplistic :: because - it - is.

You don’t have to be following me very long to realise I have pretty much zero unique ideas. My inspiration in thinking about the value of business is Warren Buffett. The general public think of him as a great stock picker – it’s simply not true – he is a BRILLIANT buyer of wonderful businesses. He identifies great profitable businesses and buys them – he grew Berkshire Hathway by buying great businesses and adding them to his portfolio…

If you buy with just cash – you’re limited to what you do before the money runs out!!

Yeah that totally sounds like something Warren Buffett would say. Leverage yourself up to the tits :: dilute your shareholders down to zero … and buy yourself the motherfucking boat you deserve!

This quest to “go public” and sucker in investors has Ed Dale trying to do official SEC-type reporting with his silly fake IM company … and the results are quite humorous and revealing. Somehow the sexy unicorn je ne sais quoi of the Internet lifestyle is lost when translated into the language of standard accounting …

As of June 30, 2011, the Company has a working capital deficit of approximately $1,644,000 and has accumulated losses of approximately $2,768,000 since its inception. Its ability to continue as a going concern is dependent upon the ability of the Company to obtain the necessary financing to meet its obligations and pay its liabilities arising from normal business operations when they come due and upon attaining profitable operations.

Immediate charges subscribers $97 per month for its flagship product the Immediate Edge which includes information on topics like social bookmarking, web 2.0, Facebook marketing and Twitter strategies.

Your Immediate Edge in social bookmarking.

30DC isn’t profitable :: or viable in any fashion … but at least investors don’t have to worry about the competition. As Ed Dale explains to the SEC in the “competition” section of his annual report …

While some general education companies offer courses in Internet marketing, 30DC’s primary competition comes from small Internet marking companies focused on building a loyal following of customers. 30DC has built relationships with a number of its competitors whereby they cross promote each other’s offerings which sometimes overlap and sometimes cover different aspects of Internet marketing.

We’ve taken the competition out of competition :: it was too competitive. And to increase our strategic advantage :: we’ve told the SEC about it … in writing.

In 2010 the company paid Ed Dale $750,000 in salary and bonuses for his services as that tubby guy who wears dirty shirts and talks into a webcam about social bookmarking the twitters. In 2011 UnderTubby was paid $350,000. Everybody else is getting screwed :: but at least Ed Dale is getting his.

ED DALE’S SUCCESS IS NOT TYPICAL.

A recent 30DC filing had an interesting disclosure …

In January 31, 2013, Mr. Edward Wells Dale, the Board Chairman, President and Chief Executive Officer of 30DC, Inc. (“the Company”) was adjudicated in personal bankruptcy in Australia resulting from claims of personal creditors, which is the equivalent of involuntary bankruptcy in the United States.

Both the fake company :: and the fake man … are net fucking negatives to society. His IM success is quite typical … in that it’s totally illusory.

People paid huge money to learn to succeed like Ed Dale :: but Ed Dale hadn’t succeeded … even though he was willing to tell people that he had … and charge them for it.

You’re spot on, I had in the past talked about my business success and used it in my marketing. Even though this situation has absolutely nothing to do with anything I’ve done in this business, it’s a massive blow to my credibility and the embarrassment I’ve put my family through because of it is something I’ll have to deal with for the rest of my life.

Please enjoy some tea and cake at your fucking pity party wanker :: but maybe it isn’t all about you?

30dc has seen fit to keep me on (which I’m really thankful for) and my focus going forward is MagCast, something we are all really proud of. I’ll continue to have an opinion on things that are going on in tech, marketing and stuff that interests me (Fully understanding the massive grain of salt people will apply)

… he says :: like as though $5000 “mentorships” are in the same rhetorical universe as “having an opinion” about Facebook.

It’s $300 per month to be a Magcaster :: so you’ll prolly want to produce something of higher quality than {the bankrupt and unsuccessful} Ed Dale has been producing with it himself. 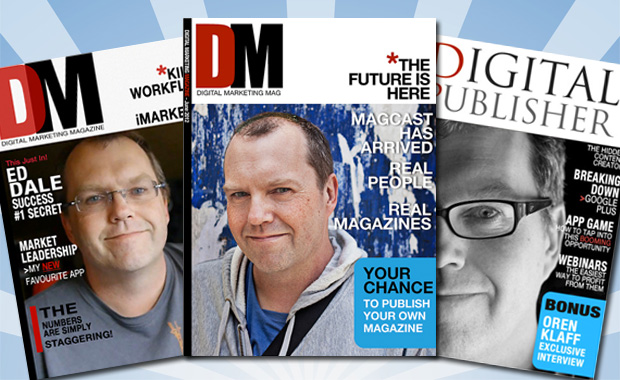 He’s Oprah in the same way that he’s Warren Buffett.