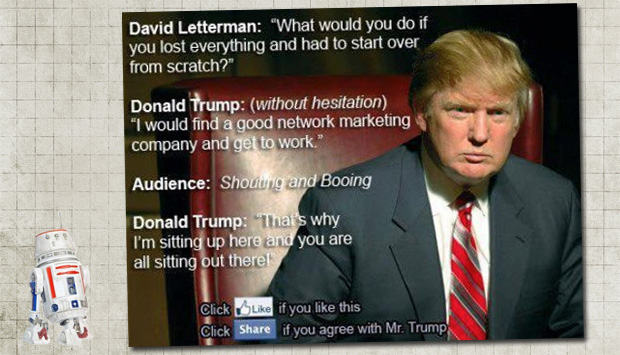 If Donald Trump had to start over :: he’d find himself a good pyramid scheme … and get to work. Clawing his way up from the bottom of the bottom :: to the middle of the bottom … where bankruptcy lurks for all who spend significant time sucked into the MLM fraud vortex of doom. Natch :: his trophy wives would be long gone :: and no decent human woman could possibly take an interest in his puffy faced stupidity … so he’d have to settle for bowling league {participation} trophies instead.

It’s a recipe for suckcess :: or something :: and I guess it’s why Don Trump is on TV … while Bank of America is foreclosing on your house.

If anyone would know about starting from scratch :: it’d be The Donald … because his family was stuffed full of scratch … and he never had to achieve a single goddamn thing on his own {total fucking lack of} merit.

But back here in not talk-show-hypothetical-reality :: where someone has allegedly alleged that someone else has totally alleged … that Donald Trump may not be worth trillions … Mr. Trump is much more about positioning himself to profit from the misery of network marketing … than he is about actually working a networking marketing {slog} business … with no meaning or control.

“Opt out of the recession” :: and achieve the success you’ve always dreamed of … seriously … do it … you’re only poor cause you wanna be poor.

Owning an MLM scam is better than getting scammed by an MLM scam :: as Jessica Pressler of New York Magazine explained in … “If I Can’t Trust Donald Trump, Who Can I Trust?”

[N]etwork marketing can be a cash cow for those who own the companies, which tend to do well in bad economic times, when people are broke, desperate, and angry at the system. Even in good times, there’s not a lot of downside to owning one: The IRS doesn’t recognize marketers as employees, so you don’t have to pay them a salary or benefits. And owners can collect on even the worst sellers, who are usually required to purchase a minimum amount of products per month.

In the past, network-marketing companies have been targeted by the FTC for making claims about how much income a person can make, which is probably why the Donald is careful to point out the program won’t necessarily make you rich. “This is supposed to be a second income for people,” he says. “This is not about them quitting their job.”

Well :: maybe he’s not that careful … and dot dot dot … losing money is not what people mean when they say “second income” … so that disclaimer is no better than a spray on tan. 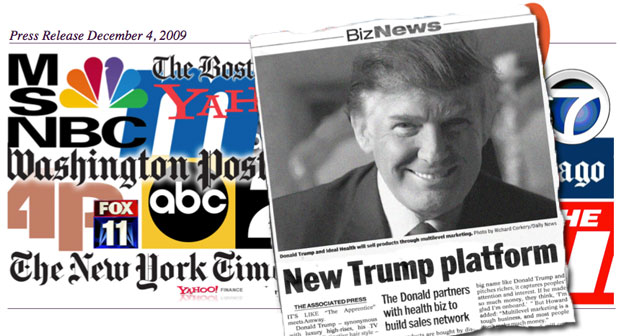 Success doesn’t just happen :: it starts for those who finish what their daddies already started … and also with the pretending … get a TV show … damn the dream stealers … your mind can build castles … will that be cash or credit? ~SaltyDroid

The Trump Network :: like most things touched by Donald Trump … turned to shit and died.

Thanks for the great review, Ted! This is my favorite MLM, with strong integrity in the leaders and products. I’ve been with the Trump Network since 2009.

And here she is a few months later …

Sorry to see this promising company going down in flames… Our first indication of trouble was when commission checks began to bounce for small amounts! The company explained it had simply changed banks. During the two years as Trump Network, there were signs of trouble and growing pains as the company poured money into huge expansion …

So what would Donald Trump do if he had to start all over :: after starting all over in networking marketing had already failed?

{without hesitation} Even more network marketing …

… this time with MLM old-timer ACN. Trump doesn’t want to be getting out of the fraudulent poor people exploiting biz op business :: right as Carl Icahn is just getting in on it … that wouldn’t be fair to the poor people.

Maybe if I had a billion dollars :: and a bunch of super smart people doing research for me … then I could do a Bill Ackman style mega presentation about how ACN is a pyramid scam. But I don’t :: and I don’t :: and Carl Icahn would just ignore me anyway … so I think I’ll just show you this picture of ACN’s super high tech front product … and let that suffice. 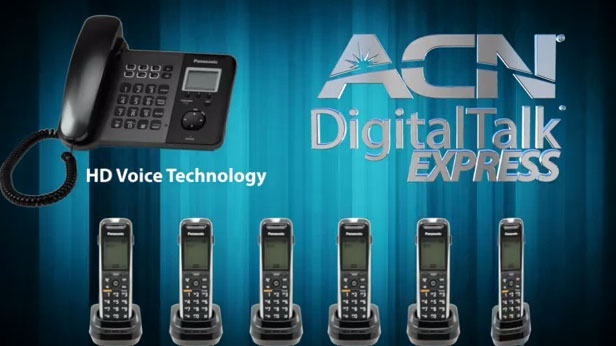 MLM landlines associated with greedy :: orange :: old men … are the fucking future … and only a dream stealing hater {or anyone with an iPhone} would tell you otherwise.