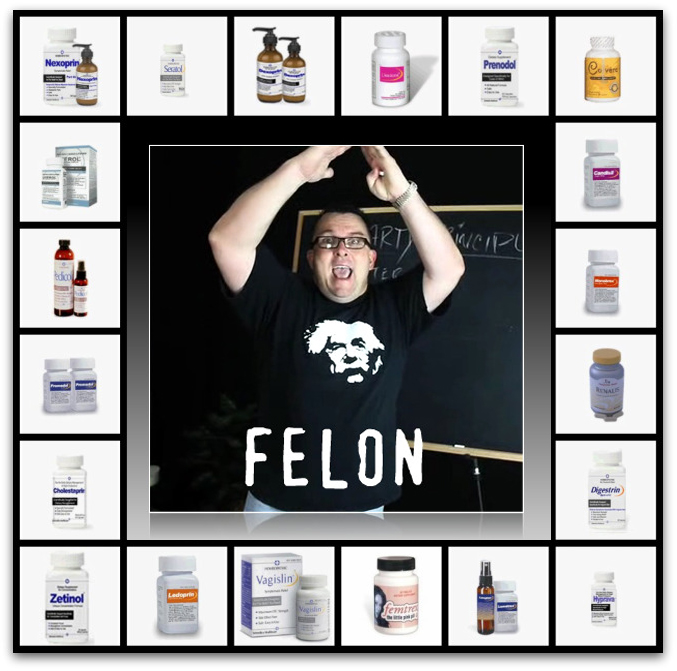 Perry Belcher is a recently convicted FELON. His crimes were willful, deliberate, and perpetrated over a protracted period. The vast majority of his victims were sick and vulnerable, and they were never compensated for the harms which he inflicted upon them. Perry Belcher’s story is one of disregard for the humanity of others. In pursuit of shallow greed, Perry Belcher was willing to defraud thousands of sick and hurting people.

Between 2002 and 2008 Belcher ran a fraudulent medical remedy company which sold expensive fake remedies to a long list of serious ailments {including: high blood pressure, infertility, bladder infection, ADHD, parasites, kidney stones, IBS, and fibromyalgia}. The company, Selmedica Healthcare, was marketed as a legitimate alternative health company with experts, research scientists, and state of the art testing facilities. In reality, it was little more than Belcher and a handful of low level employees.

The scam was a simple one to run. Websites were created for approximately 100 different ailments {likely based on the price of the associated Google AdWords}. Each site would claim that Selmedica scientists had the cure for a given ailment, and that they had the research to prove it. The sensational claims were backed up with a series of testimonials from “Harvard educated doctors” with “decades of experience” in the field concerned, and a series of {usually audio} testimonials from customers who had been “cured” by the power of the remedy. In actual fact: the claims, research, doctors, and satisfied customers were all just the complete fabrications of Perry Belcher.

The Perry Belcher case is not one in which small mistakes, led to larger mistakes, until eventually things got out of control. The Selmedica Healthcare sites were completely fraudulent from the moment they arrived on the Web in 2002. In fact, the sites changed very little over the course of the scam.

The details of the story are fleshed out below with links, evidence, and findings. Should you or your business be associating with Perry Belcher? His actions have shown him to be a criminal without heart or conscience, and a man who will stop at nothing to satisfy his own base desires. Please warn your friends and acquaintances that Perry is not a man that can be trusted. Perhaps together we can prevent him from perpetrating another mass fraud upon our fellow Internet citizens.

:: Links to The Commercial Appeal ::

The Commercial Appeal is the daily paper in Memphis. It is an above average regional paper, and had the most accurate and extensive coverage of the Belcher crime.

Deputies raid Lakeland home Due to an investigation into 100’s of complaints to the Better Business Bureau and FBI Internet Crime Complaint Center, on March 24, 2008 law enforcement officials raid the home and offices of Perry Belcher. 20,000 bottles of false cure are confiscated and Belcher is arrested and held on a $500,000 bond.

“We have tracked this guy since at least 1999 … He has always had an unsatisfactory record with us, there were too many complaints, and he was not responding to those complaints.”

“This is an example of the magnitude of white-collar crime … He apparently has been at this for ten years, and there have been various complaints, and now we are aggressively going after it.”

Shelby County man sentenced for health-remedy scam Perry Belcher pleads guilty and receives 10 years probation, six pages of special conditions {including an explicit ban on “false and misleading sales”}, and the forfeiture of most of his cash and assets.

“Prosecutors said the promises of cures were fraudulent and that the remedy ingredients were common items available in drugstores and supermarkets.”

“We have victims from virtually every continent and there allegedly are several thousand victims. People were not receiving what they thought they were receiving. The medical research was fictional. The doctors were fictional.”

“Saturday’s auction was the result of the 44-year-old Belcher pleading guilty to running dozens of health-related Internet scams, including one in which he sold “vitamins” made with ash, cayenne and chili peppers.”

“PERRY BELCHER pursuant to a continuous scheme, knowingly created web sites and published purported research by health care professionals, alleging to treat symptoms of disease or provide relief from medical conditions, when, in fact, the research and health care professionals were works of fiction created by himself or others in his employ, to solicit orders from consumers for homeopathic remedies and electronic books …”

The documents also list all the assets seized by the government. Included are all cash and investment accounts, real property, cars, and recreational vehicles. All total Belcher was worth less than $1.5 million dollars on the day of the raid. Compare these facts with the spectacular income claims that Perry makes across the Internet.

The terms of Perry Belcher’s ten year probation are highly specific. Perry is specifically barred from participating in “false and misleading sales.” He is also barred from consulting with other individuals or businesses who engage in false or misleading sales. Perry is required to report all his business associations {and their websites} to the government.

About.com writer Mary Shomon calls out Belcher’s hyperthyroid scam in 2007 long before the authorities take action. She also astutely notices that one of Belcher’s medical experts has been taken from clipart.com. {link}

Perry Belcher posts by The Salty Droid {that’s me!}

Posts by The Droid are informative and fun {much more fun than this page}. However, they are also full of exaggerated aggressiveness and profanity that some readers may find unpleasant. If you can handle a little bit of the salty talk, then please do read on.

Perry Belcher: Convicted Asshole
My first post about Perry. The title is also the summary.

The Selmedica Scam – Part 1
In an examination of the web archives for Selmedica Healthcare, The Droid illustrates how Belcher made up miraculous claims, and then used them interchangeably across different scam drugs. The evidence is damning and irrefutable.

Auctioning Perry Belcher’s Million
Video from Fox-Memphis evening news with details of the Perry Belcher possession auction. He was worth significantly less than he is now claiming around the web.

Perry Belcher: On Bullshit
A Droid edit of Perry Belcher’s YouTube “confession” video. The edit shows Belcher unapologetically blaming others for his mistakes … and confessing to NONE of his actual crimes.

Field Trip to Scam Town
Belcher’s new fraud/scam involves passing himself off as an expert in Internet Marketing even though all his success was based solely on the use of lies, fraud, and criminal tactics. This post discusses a $10,000 per head fake-info scam.

Perry Belcher: Hater of Asteroids
Video of Perry throwing an on stage temper tantrum regarding the actions of The Salty Droid. He has been very unsatisfied with my style of truth telling.

If you think I’ve left out any important links or evidence please post them in the comments below.