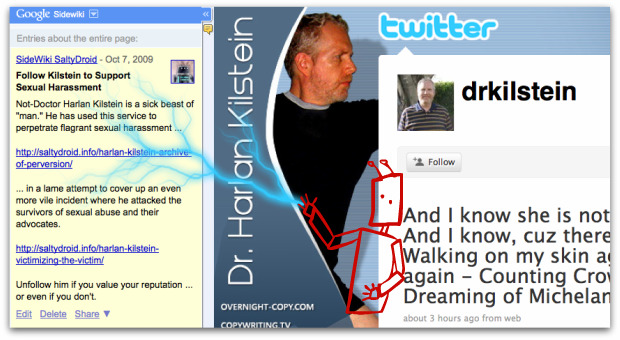 Google = so my BFF! They are taking over the world :: so one should be wary :: but they are doing it with quality and style while everyone else is busy sucking ass. So I accept their tyranny :: until they invade Poland :: then I’ll cry out for strictures!

New fucking-genius Google project :: Sidewiki :: Anyone with a Google Toolbar can leave comments in a sidebar on any website. Comments are PUBLIC and can’t be controlled or edited by the webmaster because they actually reside on Google’s servers. Are you thinking what I’m thinking? Probably not :: you’re less advanced … and way less awesome. Just deal with it.

Why not use my primary Google account? Stupid question! Obviously :: I’m going to be getting into big trouble .. so let’s just leave my Google account out of this.

Sidewiki Droid does **not **use psycho fucking profanity :: Nor does he have mercy on the wicked.

Below are the first 10 contributions of Sidewiki SaltyDroid to the people of the Internet :: All 10 are bestowed upon my ball-of-turd girlfriend Not-Doctor Harlan Kilstein. Click though to see the comments in context … even if you don’t have the Google Toolbar installed. How sweet is that? Super fucking sweet.

If you are signed into your Google account please mark these masterstrokes as “useful” as you read them :: Permanently anchor them to the top of these total shit pages. If you’re ambitious :: Install the new version of the Toolbar and leave some comments of your own. Are we going to beat this mother fucker or not?? Hellz yeah we are!

3) Makes you say ouch! :: Harlan Kilstein is a failure.

4) Drunk sucking :: Save your money for beer.

8) Not good enough for mud .. finally a PR win for mud :: The Talking Turd

Let’s do this Marines!

UPDATE :: As expected … royal jackass Not-Doctor Kilstein has started adding scripts and hacks to his sites in an attempt to block the hilarious truth from appearing in his sidebars. Some of the links above may not work {although if you don’t have the Google Toolbar they should still work fine}. Here is an article about blocking Sidewiki {link}.

Raise your hand if you think going to war with Google is a recipe for long term success on the inter-webz :: Now if you raised your hand … stand up and walk out of this room IMMEDIATELY … because you are doomed. That’s exactly what makes this tool so powerful :: it gives fraudsters like Kilstein a Sophie’s Choice :: Allow The Droid to leave damning comments :: or risk having your site kicked in the teeth by Google. I guess Not-Doctor Kilstein has made his choice :: More affraid of The Droid than of the Big G :: Seems like the wrong choice to me … but I’m humble.

As a reward for his shenanigans :: 3 more comments on important sites that the turd breathing windbag does not control ::

2) LinkedIn public profile {not that anyone ever uses boring ass LinkedIn} :: Linking with Kilstein :: GROSS!!!

3) His Google Profile {maybe he can write in a request that Google block Google} :: WARNING :: Kilstein Sucks!

UPDATE 2 :: All gone! Banned from Sidewiki in less than 24 hours? I’m BadAss and all :: but that’s just impressive! I wonder if someone is spending way too much time thinking about me?