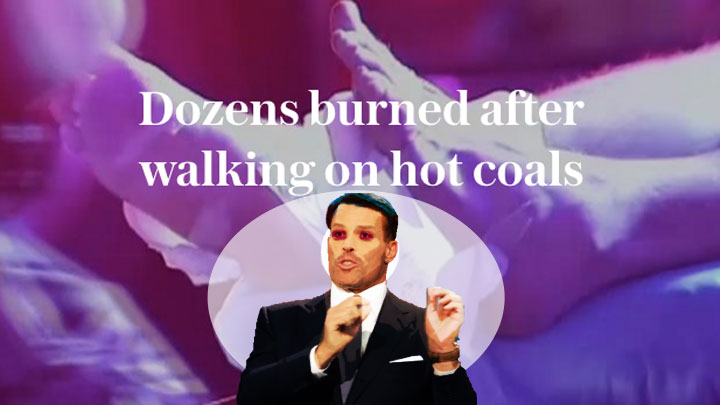 Some people were walking on hot coals … and got their feet burned.

Yes way :: it totes happened … I know because I read stories about it on like forty different news outlets.

The media doesn’t do stories about the huge harms done by Tony Robbins. But they love the shit out of the #footburn #ambulance thing.

Here’s this weekend’s foot based incident as told by The Telegraph :: a newspaper printed in England … a small racist island off the coast of Europe.

Dozens of people have suffered burns to their feet after walking across hot coals during a programme by an American motivational speaker.

Hot coal walking isn’t really supposed to be dangerous … but in American motivational speaking we strive to do everything as stupidly as possible.

A spokesman for Mr Robbins said 7,000 people completed the firewalk in Dallas without mishap, although it was not uncommon for up to one percent to suffer some discomfort similar to sunburn.

“Someone unfamiliar with the process of the fire walk called 911 reporting the need for emergency services vehicles to be dispatched.”

Don’t call 911 just because people are burning :: that’s not “the process” … James Arthur Ray knows what I’m talking about. Sometimes a few people have to burn {and die} so that the scam might have a slightly increased close rate on the six-figure upsells … dollars per lead … amen.

How are 7000 people still showing up to the weekend events of a 90’s infomercial huckster?

… asks my imaginary friend Reginald P. Higgenbottom :: a scruffy reporter who’s not out looking for burnt feet to smell.

How were 60,000+ people showing up to see Tony Robbins :: Donald Trump … and Robert Kiyosaki?

People want solutions for their unsolvable problems … and scammers are allowed to use deception and manipulation to take advantage of that.

It wouldn’t be possible without buy-in from liars at every level of our completely corrupted :: propaganda based … power structure.

We best Awaken the Revolutionary Within … before there’s nothing left of our great democratic experiment but lies and burnt feet.