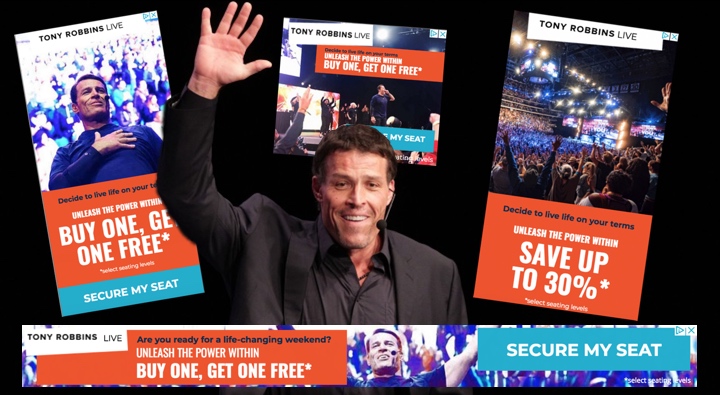 So Tony Robbins was out trying to convert massive ad spends into expensive upsell seminar participants; aka changing a lot of lives, #blessed. And this happened…

You can read the NYTimes to find out about all the blowback that the infomercial salesman suffered for (surprisingly I guess?) being a huge dick about women. Or you can read this NYTimes article and find them giving Robbins an Andrew Ross Sorkin reacharound. Either way.

Tony is a monster made by the media.

He’s a skilled monster though. Trash talking #MeToo won’t be good for conversions, it’ll increase the cost to generate buyer leads, it’ll suppress free media coverage; it’s just overall bad for fake business. “Women should shut up” is the sort of thing you only say at the smaller, dramatically more expensive, events where everyone in the room is completely mindfucked already. Tony knows this.

Why say such a dumb thing in a big venue?

He immediately posted this “apology” to (delete your) Facebook:

Let me clearly say, I agree with the goals of the #MeToo movement and its founding message of “empowerment through empathy,” which makes it a beautiful force for good.

Empathy is a force for good. Wow. Really going out on a philosophical limb there Socrates.

For 40 years I’ve encouraged people to grow into the men and women they dream to be.

You’ve encouraged them to borrow money and give it to you, deferring their own dreams indefinitely.

I watch in awe as more and more women all over the world find their voice and stand up and speak out.

Hundreds of thousands of untested rape kits have been backlogging on bureaucratic shelves for decades.

Why voice what won’t be heard?

All of our growth begins with learning. My own started with a childhood marked by abuse.

Archetypal pity play… scammer/sociopath get out of jail free card.

I am humbled that others have looked to the path I have taken in the decades since as lessons in their own journey.

“Humbled” might be the wrong word to describe your ad-buy-fueled money-hungry megalomania.

But sometimes, the teacher has to become the student and it is clear that I still have much to learn.

Oh God! what could I do? I foamed –I raved –I swore! I swung the chair upon which I had been sitting, and grated it upon the boards, but the noise arose over all and continually increased.

Was it possible they heard not? Almighty God! –no, no! They heard! –they suspected! –they knew! –they were making a mockery of my horror! -this I thought, and this I think.