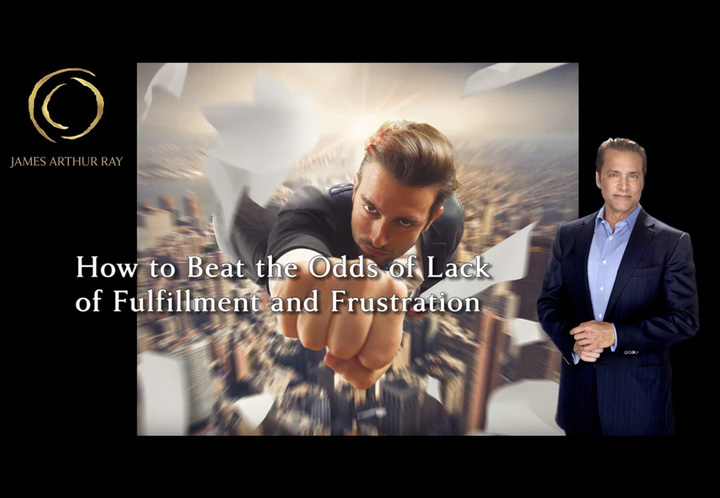 So James Arthur Ray :: season two … I guess he’s a zombie now or something? A zombie {in bad makeup} teaching us … “How to Beat the Odds of Lack of Fulfillment and Frustration.”

I don’t think I’m too interested in learning about how to live fulfilled from the walking dead :: but who’s this handsome young superman in the stockphoto? Cause him … me likes. Whatever it is he’s selling :: is most definitely something I’d be interested in pushing through my affiliate network … know what I mean ladies?

DeathRay thought his prison comeback story was going to blood-pave his path to hit television fortunes :: his agent may have thought the same … but it didn’t fucking happen. I haven’t heard why it didn’t fucking happen :: but it wasn’t because the rotting media suddenly sprouted scruples … so I’ll assume it’s something to do with the dramatic deterioration of Ray’s physical appearance.

dead on the outside? == maybe podcasting?

Last winter :: Matt Stroud {responsible for this piece of awesome} checked in on Ray’s comeback for Bloomberg …

Standing in the kitchen at the back of the Tatum Ranch Community Center in suburban Phoenix, James Arthur Ray hears the rolling chorus of Paramore’s Ain’t It Fun start to play in the background.

He jogs out of the kitchen to a standing ovation from around 30 name-tagged men and women who last week shelled out $495 for his daylong presentation on “Resources for Epic Living.”

Six years ago, Ray wouldn’t run out of a kitchen unless it was to speak to thousands of people—or the audience had paid four figures each for the privilege…

“I. Am. Responsible,” Ray begins to his captive Phoenix audience, pausing between each word for effect. “You’ve got to think to yourself, ‘What would happen if I took complete and total responsibility?’”

Responsibility? I mean Jesus H. Christ in discount Walmart sandals! Where does this d-bag get off even uttering the word responsibility? He manipulated three people to death :: and then when called to account for those actions … used the dead people’s money to pay fancy L.A. attorneys to argue {ad nauseam} that fucking ant poison was the real killer. 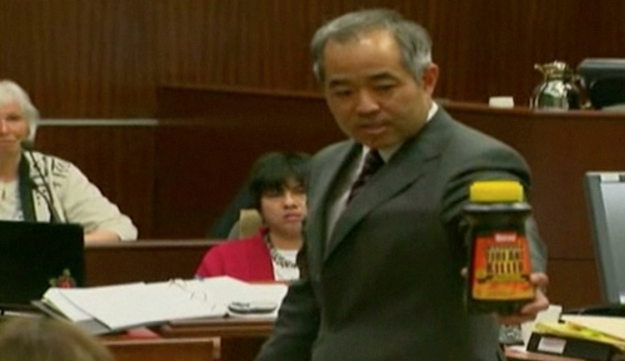 Ant poison :: that’s not a terrible joke … that was his actual million dollar defense.

In the two years since Ray’s inexplicable {total bullshit} release from prison :: I’ve been trying hard to avert my gaze from his continuously hard-selling nastiness … cause it reminds me of all these dark to face truths about the hopelessness of these situations.

I needed a break … you know?

The truth is usually completely terrible. I get why people are willing to buy {or worship} substitutes for truth. Fuck the truth! How about a nice warm cup of delusion?

Over Thanksgiving weekend DeathRay mailed his list incessantly about an “epic” opportunity for life changing life change. It reeked of zombie desperation … and I couldn’t/didn’t resist it.

My Gratitude Gift For You

Black Friday GIFT FOR YOU

Did You Miss Your Gift?

SaltyDroid Did You Grab Your Gift Yet?

We’re not selling ANYTHING, We’re giving you something

SaltyDroid Time is Running Out

He’s not selling ANYTHING :: he’s giving … what a concept.

My team and I decided to do something completely different for Cyber Monday and give you something versus trying to sell you something. Pretty cool, right?

So cool … I totes wish one of my team were here to fist bump right now you guys!

All seven Thanksgiving spams linked to this YouTube vid …

Because why should murdering scammers have to host their own manipulative sales videos :: right? … Google CEO and fellow #SummitFamilyMember Eric Schmidt? My videos have to come down … but his have to stay up?

And why should blatant liars have to come up with their own spam management solutions … right Goldman Sacs backed InfusionSoft?

James wanted me to know that I was nowhere near my potential. No matter where I was … it wasn’t as good as where I could be if only I’d consume some top shelf Skype coaching! So happens he’s willing to give me one such coaching session :: and as a fricking gift no less … the man is practically a zombie saint.

Most of his clients are six figure earners {says he} :: and the improvement he’s brought to their lives just proves {without proof} how ultra-fucking-valuable he’d be for any of the lesser-thans looking in on this YouTube spam message of Thanksgiving gratitude.

Video DeathRay assures me that he’ll be doing this personal coaching personally :: he usually has “his coaches” do it … but not this time. This time it’s gonna be special … like prom at a Motel 6.

Of course :: in his expert experience {as a convicted felon with multiple bankruptcies} … people don’t really appreciate gifts that they don’t pay for. So this free gift will be costing me $7 … and naturally my current credit card information will be entered into his database of doom and destruction.

No worries though :: cause I’m desperate to take my fake life {and even faker business} to the next level … on an infinite progression of levels. It sounds so spiritually satisfying. And we’re talking about a $3000 value here … so I’ll be coming out 2993 completely imaginary dollars ahead of the game. Suck on that “odds of lack of fulfillment.”

… clicking the link below …

… give me some of this sweet zombie coaching! … 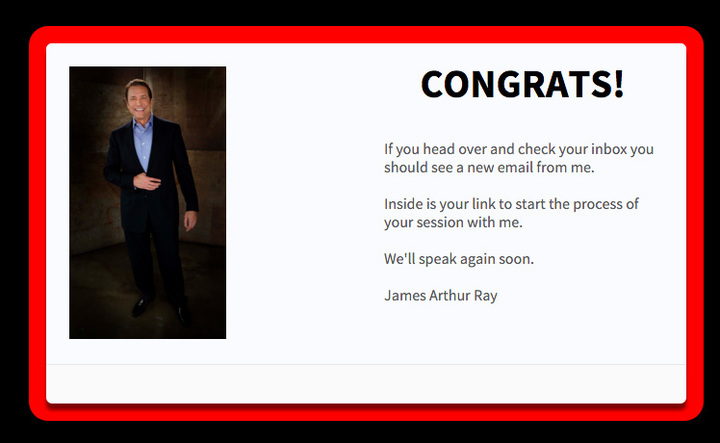 But no :: not yet … according to zombie Napoleon here … there’s gonna be some necessary paperworks first.

I wanted to do something special for you this Thanksgiving season.

So, my team and I stuck our heads together to answer the question…

“How can we give Jason Jones the most incredible value and life changing experience possible?”

Quick note, before I tell you the idea we came up with…

Not everyone will see this, you’re only hearing from me today as you took fast action and proved yourself as someone truly devoted to living the life of their dreams.

You just click here and fill out this form so that we can give you a customized experience and some free bonuses.

Just a form :: that not everyone will see … for my own free bonus pleasure.

It’s simply a way of giving you something incredible and blowing you away with value.

So, today is the last chance to get that customized experience…

I need to be blown away by customized value :: fucking immediately … before this opportunity turns into unicorn fart dust. 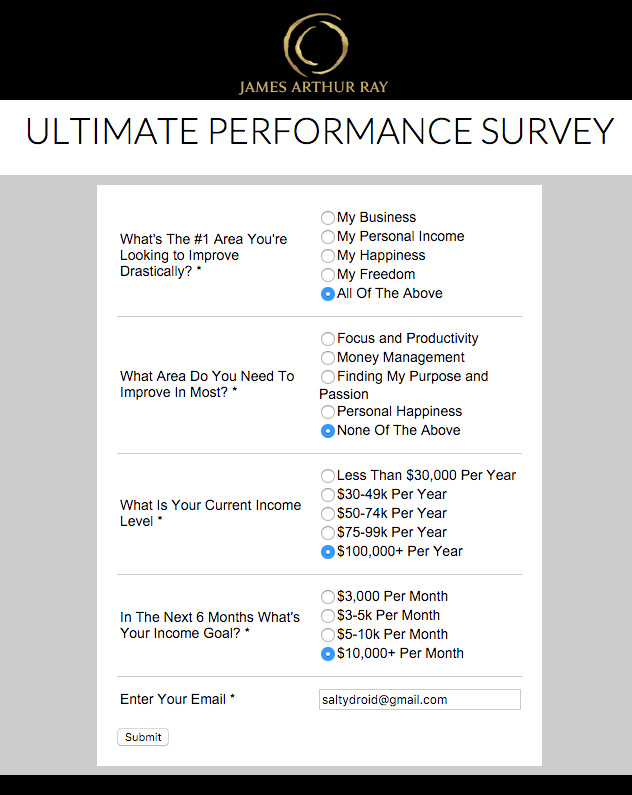 In retrospect I realize that I’ve chosen four areas as the #1 Area I’m Looking to Improve Drastically. I just felt like there was so much pressure to succeed on this survey … and I fucking blew it. Of course :: I should have ticked off “My Freedom” … because that’s definitely like a real thing to have for a Drastically #1 Goal.

Subject: Boom! Just for you…

Yes! You’re in the elite…

You’re one of the few who seem to be ready for the next level based on your answers, and no - this email does not go out to everyone.

In fact, it goes to less than 10% of those that fill out the survey.

Yes! I’m so fucking elite right now! Are you guys feeling it too? Yeah … it’s prolly cause my elite vibes are so effing strong that they heat your own {very unelite} quantum waves via proxy particle osmosis. Those are some science words right there yo … so they gots to be true!

My accountant tells me I’m crazy as we’re “technically” losing $3000 by giving you this basically free coaching call.

You see, he’s a numbers guy (obviously) and has everything worked out to the penny, including how much my time is worth.

And he wasn’t happy when we came up with this plan. 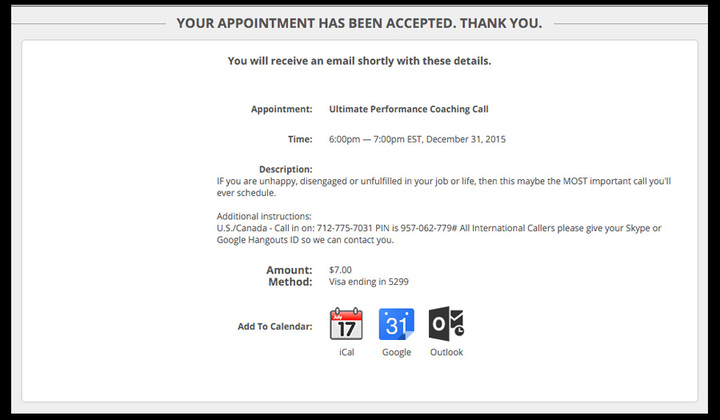 The next available Ultimate Performance Coaching Call was for 6pm on New Year’s Eve. You’d think a top 10% elite motherfucker like myself might have better things to do on New Year’s Eve than conference call with a failure felon … but I guess not.

Is this coaching call actually going to happen?

Self-help is not a real thing. It’s not a philosophy. It’s not a science. It’s not an industry. It’s just a big fat fake facade.

Lead generation is a real thing :: a big thing … a {mostly} bad thing. The less encumbered a particular perpetrator is with actual human values … the better. Only the worst can hope to compete … so DeathRay’s FOUR FUCKING DEAD PEOPLE are positive blurbs on his lead generation resume. He’s got the right stuff baby!

Not people :: leads … that’s fucking it. If you think it’s more complicated than that … then you are wrong. Don’t argue with me about it :: because I’m one of the elites … and your dumbass opinions are worthless to me.

So now let’s say you’re a flight attendant at a major airline {or any other normal type person} :: and you can’t tell this fucking parasite that you make $100,000+ per year … well then you’re sorted into a different pile of leads-not-people.

But don’t I also have to notice that the BlurredLady said this?

I follow you closely, and have for years. But this one disappointed me.

This is the one that disappointed you BlurredLady? This one? That the Free $7 Thanksgiving Black Friday Cyber Monday Gratitude Gift wasn’t for realsies?

That :: that … that’s what fucking disappointed you?

why are these people so fucking stupid?

Oh yeah that’s right :: don’t brainwash people!! It fucks with them. It destroys :: by design … the foundations of their personhood. All the dumb shit brainwashed people say and do is a complete non-thing :: because … don’t fucking brainwash people!!

Do not inundate us with ignorance … and then demand self-awareness in return.

So yeah :: I paid $7 for some sweet ass DeathRay coaching … and I best be fucking getting it.

But when I for sures don’t get it :: I think I’ll not bother complaining to “Harmonic Wealth Global Inc.” … one of a billion non-Delaware Delaware corporations. No :: I think my inquiries will lie more with the whos and hows of the payment processing … because … fuck the banks already.