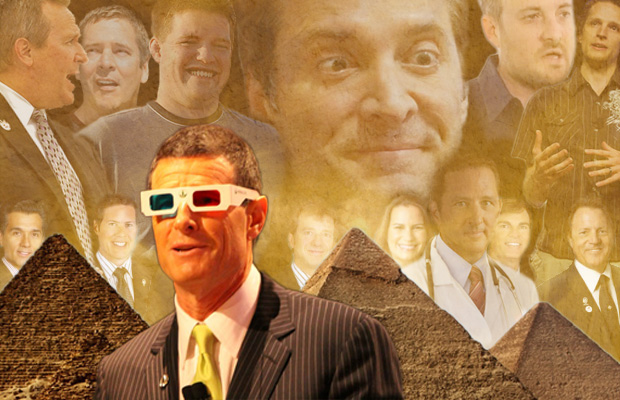 It’s that simple {of a mindfuck}.

Why aren’t you doing it?

Oh and also :: it will most likely tear your life apart … and ruin everything.

Confesstimonials™ are posts written by people {not pretending to be robots} who have firsthand experience with scamworld darkness :: and this one is about to begin …

My name isn’t Roger Willco; and this is the story of my involvement in multi-level marketing, its impact on my life, and that of my former partner.

Several years ago, a friend whom I’d known since college, asked me to meet her at a weekend regional training event put on by MLM #1. The training was primarily motivational—the keynote speaker, an MLM #1 “Platinum Presidential”. At that time, my friend held the independent distributor rank of “Regional Director” in MLM #1. She’d enrolled four years earlier, believed she was doing well and anticipated achieving the rank of “Executive Director” in the near future.

Within a few months we formed a domestic partnership. I was retired from my own career; so I turned my time and energy to doing what I could to help her be successful in her MLM #1 business. She enrolled me as an independent distributor at a cost to herself of over $1,000. She wanted me consuming the company’s products—a prospect at which I was decidedly unenthusiastic. However, she believed my life and health depended on it and it helped her expand her downline; so I agreed to be enrolled.

That autumn, I helped her prepare business expense documentation for her income-tax return. One of my assigned tasks was to tabulate her expenses for MLM #1 in the previous tax year. Her expenditures for product alone exceeded $16,000. I was present at her meeting with her tax accountant, where I learned that most of the products she bought had been for her personal use.

Shortly thereafter, I accompanied her to MLM #1’s annual national event. At that gathering, I experienced a mind-control technique, known as “Large Group Awareness Training” (LGAT) — in my observation similar to “mob mentality”, only in a highly organized context. There was a great deal of hyperbolic promotion of the company, the MLM business model, and the company’s products at this three-day event.

Traditional social sensibilities were treated as roadblocks to business success. “J.O.B.s” were denigrated as “enslavement”; and recruits were explicitly discouraged from encounters with anyone who took issue with the way they conducted business. They were taught that persons “guilty” of critical thinking were “losers, negative people and dream stealers” to be avoided. True due diligence in the course of investigating the company, its products or the “business opportunity” was discouraged. Curious distributors and prospects were instead directed to the company’s own “informational” website where they could find “studies” done by “independent researchers” who, to the critical investigator, were clearly shills for the company. Distributors were thus immersed into a closed socially aberrant culture in which they were conditioned to only accept information supportive of their MLM involvement.

There were dozens of “breakout trainings” which were taught by top-level distributors; and my partner was compulsive about attending as many as possible during the two days they were offered. Most of these trainings seemed to include at least implicit endorsement of deceiving prospective distributors and customers through obfuscation, avoidance, omission and just about any other means that didn’t involve outright lying. Attendees were plied with portrayals of lavish lifestyles and promises of large passive income streams. The clear implication was that these were attainable by any distributor who believed in their upline, the company and its products and followed top distributors’ “easily-duplicatable [sic] systems”.

Dozens of distributors lined up to tell their stories of experiencing or witnessing healing and relief of suffering which they attributed to use of MLM #1’s products—usually in remarkably large quantity. I noticed that many of the diseases, such as multiple sclerosis, discussed by testifiers are historically characterized by a labile course, in which patients experience repeated spontaneous cycles of improvement and deterioration. This characteristic renders sufferers susceptible to causal fallacies.

A “storefront” was open during breaks between sessions. While a few of MLM #1’s products were displayed and offered for sale, the majority of shoppers seemed to spend most of their time looking at the plethora of “MLM #1-approved” sales aids (“tools”) and other promotional materials offered for sale by the company or its purportedly independent tools-marketing partner. My partner usually spent in excess of $1,000 on tools and promotional materials at each of the eight national or international events we attended together.

MLM #1’s annual international event took place every spring. It was identical in format and function to the autumn event. Smaller groups of distributors in our state held regional 1½-day events patterned after MLM #1’s autumn and spring events—only on a smaller scale and without the breakout sessions.

Finally, individual distributors or local groups in our area conducted periodic “opportunity meetings”. The purpose of these meetings was to present MLM #1’s “business opportunity” to prospects in a group setting. In my observation, the usual practice included stocking attendance with existing distributors who would bring their own prospects as guests and supply contagious enthusiasm (peer pressure). Opportunity meetings included some combination of training, promotional presentations and product sampling. Time was always set aside for testimonials.

Typical opportunity meetings ended with a facilitator appealing to prospective distributors to write down the names of 15 friends or family members with whom they’d want to share this “fantastic, once-in-a-lifetime [business] opportunity”. The prospective recipients of such “sharing” were billed as the new initiates’ “warm prospects”. By this time in the encounter, through LGAT and hype, new enrollees were excited to follow through with this proposed sharing, in the belief they would be doing their warm prospects a favor. That they were about to violate the social proscription against exploiting personal relationships for profit seemed to be lost on them. I observed over time that this turned out to be the first step many new enrollees took onto a slippery slope of increasing social aberrancy. It seemed that with few exceptions, friendships within the MLM culture were quickly formed and intense, but shallow, unreliable and remarkably phony.

One year into our partnership my partner bought some $20,000 worth of MLM #1’s stock. Three years later the company’s stock began to drop after a nationally televised exposé on healing claims made for their products by one of their independent distributors. Two months later, a state AG filed suit against MLM #1, alleging deceptive marketing practices and violations of the state’s food and drug act. As the stock continued to lose value, I tried to convince my partner to divest herself of her MLM #1 holdings. She remained steadfast in her inexplicable refusal to do so, saying that she would not betray the company by selling. Two years later, she finally did sell her stock when its value had dropped to $3.00/share.

I helped my partner prepare her business tax records on my personal computer for another tax filing several years into our partnership. Somehow, working with each category, one at a time, I had no sense of how much her business was costing her in total. Years later, I ran across the spreadsheets for her expenses as I was deleting her files from my computer. I was shocked to discover that, excluding what she wrote off for housing and utilities—expenses she’d have had with or without her business—they totaled more than $49,000. I never tracked her business finances; but I can’t imagine she received more than $20,000 in commissions and bonuses that year. Extrapolating that annual loss rate over the 8½ years of our partnership, her net losses may have totaled as much as $250,000 or more in that time.

After five years, my partner finally abandoned her involvement in MLM #1 to follow friends of hers who had been high-level MLM #1 distributors, to MLM #2. By then, we could no longer afford for me to accompany her on her business-related travels. So I didn’t witness what transpired at the regional and national events she attended. I did however, attend local trainings in another community and opportunity meetings she hosted in her home. These events followed essentially the same pattern as the MLM #1 events I’d attended, replete with training in deniable deception techniques and appeals to avarice.

After about a year with MLM #2, my partner’s upline left that company, initially complaining of wrongdoing on the company’s part. However, they finally settled on a different explanation…that, although they’d been doing well, their downline had not. The inconsistency in their stories seemed to be completely lost on my partner; and she enthusiastically followed them into MLM #3. Again … more of the same.

By then, our household financial losses had begun to mount to the point they were no longer sustainable. Within several months of her move to MLM #3, I was overcome by my growing cognitive dissonance; and I withdrew from any significant supportive involvement with her upline, although I continued to assist her.

Finally, unable to gain her cooperation in formulating a household budget and rationalizing her business involvements, I reluctantly told her she would soon be faced with having to choose between me and her continued MLM involvement. Without hesitation, she replied that given that choice, she’d stay with MLM. Several months later, after she spent an afternoon exploring yet another MLM “business opportunity”, I left the partnership. 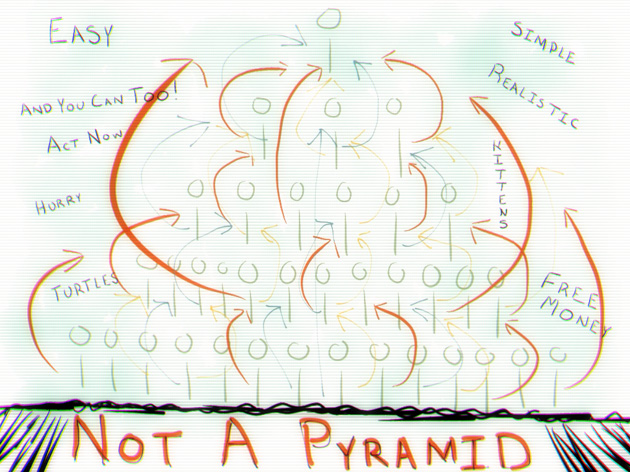 Time and distance from my life on the fringe of MLM has lifted the fog of confusion and depression that enveloped me for much of the time I lived in that sinister world. Intensive self-directed study has led me to some solid and considered conclusions:

The MLM business model is reliant on convincing prospects of two foundational fictions:

Because this industry can’t survive without being deceptive, it is incapable of self-regulation; and government agencies charged with protecting consumers from fraud don’t step into the regulatory void. So MLM scams roll on, crushing their millions of victims with impunity year after year and decade after decade.

It’s not that we can’t do something about it … it’s just that we haven’t.