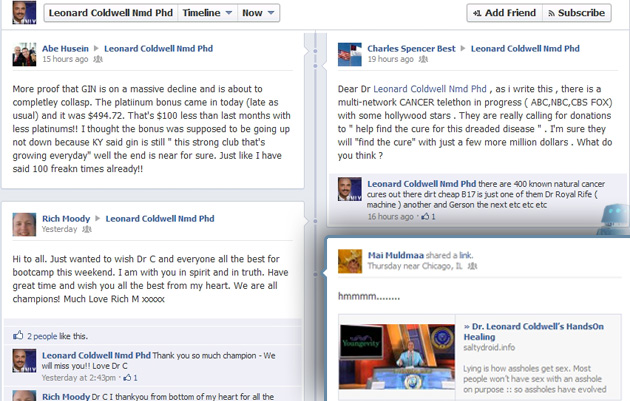 Someone told Leonard Coldwell’s Facebooks about my article about how Leonard Coldwell is the fucking worst. He left it up most of the weekend while he was busy bootcamping his champions™ :: because along with being an idiot … he’s basically a computer illiterate.

But Mr. Shorty McPervyPants finally figured it out :: and replaced the truths with a totally sensible FAPB {facebook all peeps bulletin} …

$ 500 reward for the first one that gives me the real full name ( identity ) and address of this Salty Droid loser. Plus $100 dollars extra for a recent recognizable picture if that guy. 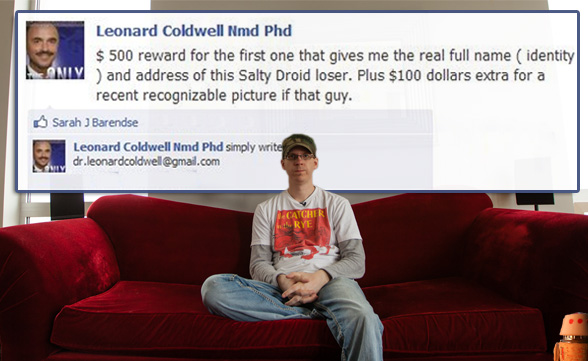 The first “who is the salty droid” reward was only $75 :: great to know that the price has continued to rise even as “the secret” information has become available to the point of comedy … the market has spoken!

Speaking of markets :: I need me that $600 {because … you can’t make money online} … so I claimed it … and simul-fucking-taneous gave Bernd his chance to comment … like a good little reporter would …

I see you have offered a $500 dollar reward for the address and identity of The Salty Droid :: wow … big spender.

I would like to claim that reward {not that it’s any of your business … but I plan to spend all the money buying tacos for Rick Calvert}.

The Salty Droid loser is …

That info was already available all over the web … too bad you’re too stupid to complete even the most basic research. It’s also in a file that some of the other scammer d-bags have compiled about me and my friends and family using various lame investigators … too bad you don’t have any friends or someone may have sent that little item to you. No brains :: no friends … what do you have going for you? That’s my question … well it’s one of my questions.

The latter link includes HD video of Jason inside 1250 South Michigan Avenue … so that should most def qualify me for the bonus benjamin.

Should we do this by paypal or check?

PS :: Would you care to answer to the charge that you are sexually abusive towards women … too include very young women? Would you care to show me some proof that you’ve ever received any degree :: from any college … ever? Would you care to comment on your comments labeling Kevin Trudeau a “cult” leader? Have you ever used the threat of violence in an attempt to repress the exposure of information about your sexual misdeeds? Do you think such threats will be effective against The Salty Droid … or do you think maybe Jason Michael Jones of 1250 South Michigan Avenue would rather die in the fucking streets than back down to a waste of human skin like yourself?

No response so far :: hang in there Rick Calvert … make some frozen burritos or something.