Darker than the DarkSide 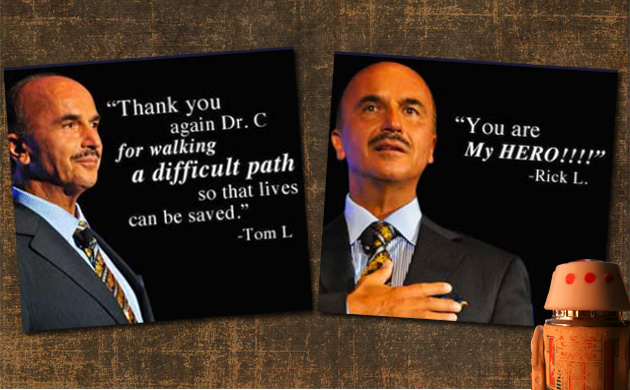 Dr. Leonard Coldwell is not a doctor :: he’s not a Leonard Coldwell even … he’s NotDoctor Bernd Klein … the pervy little disgrace of Germany. Bernd’s mother Gerda :: knowing immediately what rot she hath wrought … tried to kill herself by swallowing too much hepatitis. But Bernd was an imaginary doctor even in his youths :: and he saved mommy dearest from herself … as he tells in one of the most ridiculous examples of fraudulent biography on all of the interwebz …

Discovering his gifts at a very early age, he single-handedly cured his own mother from Hepatitis C, Liver Cirrhosis, and liver cancer – a near impossible feat since she had been given a diagnosis of a terminal state and a prognosis of only 6 months to live.

Throughout Dr. Coldwell’s successful career, he has to date, cured over 35,000 cancer patients (studies have proven a 92.3% cancer cure rate).

Okay nope :: lies … lies so stupid there could be no stupider lies. Oh :: wait …

Dr. Coldwell is the most endorsed and integrated natural Doctor in the world, having earned 4 doctor degrees and 4 PHDs.

19 times Mega Bestselling author, the world’s leading authority for Cancer cures based on independent studies performed and substantiated by the Dr. Hohn Institute for medical research, with an historical cancer cure rate of 92.3%, and with over 3.4 million seminar attendees plus over 57 million readers … When live on each program he generates an average 280,000 email responses from folks requesting information.

Totally :: but seriously … nobody had ever heard of this stupid little fucker.

Then came Kevin Trudeau circa 2005. Trudeau was using a popular lead gen book :: infomercials … and every other trick in the Scamworld book “they” don’t want you to know about to separate people from their money … writ large. Trudeau made fake doctor Lenny Coldwell his B-team bitch :: that changed things for Coldwell … and they’ve been together unhappily ever after.

With leads coming in from KT’s bullshit :: Coldwell could focus on manipulation and exploitation … which is far easier than generating the initial leads. Lenny needs easy jobs :: because he’s dumb … and he sucks at stuff.

A Salty Droid Dateline 60 minutes 4 PHDs exclusive investigation has revealed that Leonard Coldwell set up remote servers with family in Germany in order to process email leads generated by Kevin Trudeau’s fraudulent activities. Leonard would reply to emails as “Dr. Hohn” {who is a real person … and actual doctor} … and refer victims to his own products.

Such elaborate measures were prolly required because America’s Federal Trade Commission was crawling up the ass of Trudeau’s operation. I suspects they even sniffed out this fake Dr. Hohn situation. But they suck :: so they accomplished jackshit … and Trudeau and Coldwell scam on unabated.

B-team bitch Leonard Coldwell at his side :: Trudeau moved on to the not next not big thing … MLM.

His Global Information Network is an MLM based “club” where you deposit all your money :: and all the money of any friends or family you can successfully pressure pitch :: in the “club” until you reach the Level 5 Inner Council and Xenu clears all your thetans.

“A good MLM is really an oxymoron.”

But before GIN started to finish imploding like all MLMs always do :: totally unqualified to do anything sack of shit Leonard Coldwell was making good money suckling on Kevin’s pasty white scam teets.

Keven Trudeau made “Dr.” Leonard Coldwell :: so it was a highly unorthodox violation of Scamworld protocol when Coldwell started publicly shitting on his scam mommy …

It is as I believe a bankrupt club that was a good idea and got killed by greed and fraud! as I personally believe and the owner is still sucking people out with deception lies and fraudulent, false and deceptive advertisement as I believe. A lot of people seem to go to jail for fraud as my lawyers believe… It turned into a cult for many idiots, losers or simply deceived people, that put all there money into it and quit their job and now are still trying to keep this club of fraud and deception ( as many believe it is ) alive.

Harsh words :: fucking illiterate as I and my lawyers believe :: but harsh … please continue with your 4 doctor degrees of mouth talking …

They gave 50 000 or even 75 000 dollars and did not even know what they bought, it looks like that they had no contracts and I am sure they lose their money I am am sure the club is gone latest at the beginning of next year. The owner goes to jail soon as we all believe and he does not have the 37 million dollars ( maybe 40 million with interest ) that he has to pay in court fine as he told me. So the usual Jones town mentality with their inner circle and level 5 brainwashed cult followers.

Gosh :: somebody’s as mad as he is bald … and daft. Comparing an A-teamer like KT to Jonestown is a Scamworld career ending mistake … because it’s way too close to truth. In private? Sure no probs :: tear your shirt off while blaspheming L. Ron Hubbard :: throw some plates … and give it to Karl up the ass. But on The Facebook? Oh no you didn’t!

The funniness of that fuck up :: together with @CosmicConnie’s long time whirled interest in these goon bags … got my attention.

I believe :: if you’re a rotten to the core psycho prick with the worst kind of evil secrets to hide … you don’t want my attention … as I believe.

Hi Leonard/Bernd :: I’m The Salty Droid … and I know your fucking secret you worthless piece of shit.

The horror that is you :: is finally going to allow me to turn the light onto the darkest of Scamworld dark spots … the rampant sexual exploitation and sexual abuse of vulnerable women {and women too young to be called women}.

Anywayz Leonard :: as I said to non-woman Spider Naomi Dunford this time last year … at the beginning of that important and inflammatory sequence …

… we just started a game that you’re going to lose … so badly.