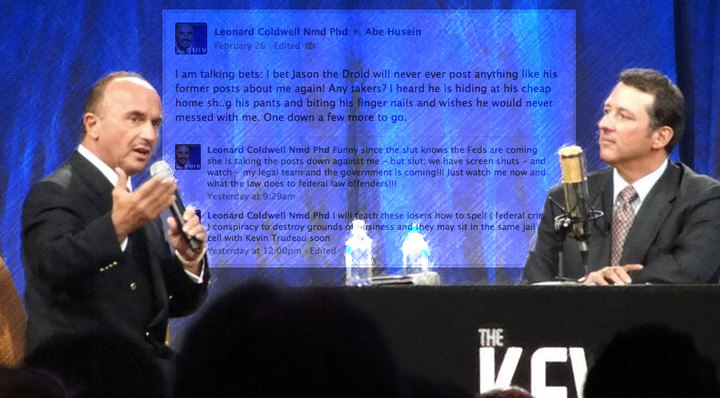 Kevin Trudeau’s Global Information Network is a scam :: a big fat ugly scam … or to translate that into the language of local television news …

“Will I stop doing this now? Some say yes, while others, say no.”

But seriously :: this story by Ryan Kath was pretty okay … so I’ve embeded it on my super hip www dot Action SaltyDroid dot worldwideweb dot site.

According to GIN dupe Abe Husein :: who is featured in the story … GIN dupe Abe Husein was the dopey spearhead behind getting this story in the news. For weeks Husein was parading around dancing on KT’s still vacant grave as though a local news story was the crime fighting equivalent of a full congressional investigation. During his parade of grave dance he aligned himself with shit eating losers like Leonard Coldwell and Peter Wink … who both had nothing but love for Trudeau as long as the scam money kept flowing their way.

After the television story ran :: Abe reported that his GINtruth site had received 200,000 hits in a single day … a very silly thing to say.

“Was Abe Husein lying about his hits because he’s a sad desperate little fool?”

A few days later Abe announced that he’d be going into bizness selling some lame “cleanse” with Coldwell {cleansing not included} :: and now he’s tagged on The Salty Droid … congrats douche!

Stories about MLM scams are hard to tell because the “victims” most likely to speak out about an imploding MLM are the hyenas putting on anti-guru face paint in hopes of picking over the corpse for loose meat to devour :: it’s not pretty … and it happens 100% of the time.

Check out Abe Husein’s comments on the Action 41 website :: and around the webz and facebooks … anyone who’s still under KT’s spell is an “idiot” or a “kool-aid drinker” who needs to rid themselves of their silly childish delusions. Abe’s almost as vile as Leonard in his bile for people still believing what he was still pretending to believe just a couple months ago.

GIN doesn’t exist :: it’s the lipstick on the pig … after you wash it off with a hose that whore pig is going to tart right back up. It’s the pigs involved that need to be stopped if anything is going to be stopped … not the shell corporate entities organized in the name of young Ukrainian wives. Fucked up useless pigs like Peter Wink :: Kevin Trudeau … and Leonard Coldwell. 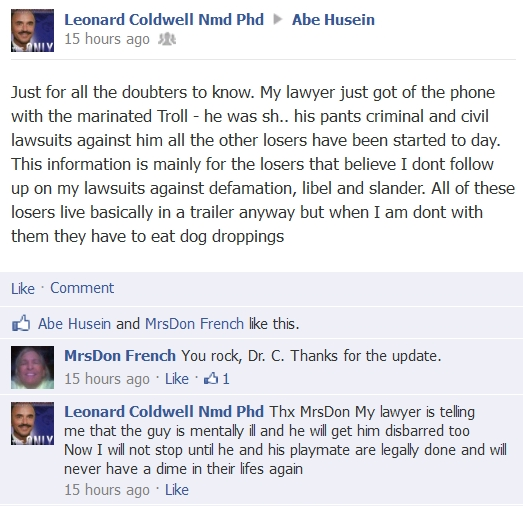 I guess I’m the “marinated Troll” :: I don’t really know what that’s supposed to mean … but hopefully it’s got something to do with teriyaki.

Leonard Coldwell likes to talk shit about the world as he wishes it was :: rather than as he knows it is … and that’s catching up with him right about now.

I cold called Lenny’s attorney Bill Hanahan :: at home … because cold calling lawyers is the sort of shit I do. Bill and I had a nice talk. I warned him that NotDoctor Coldwell :: Bord Certificated PHD … was going around claiming all sorts of crazy stuff in his name {s_ee supra_}.

Was he planning to sue everyone in sight to try and silence the long overdue pubic discussion of Leonard Coldwell’s dubious practices? Nah :: not really … he sounded very unenthusiastic about that. It also sounded like I was the least likely person to be sued {natch!} :: and that Leonard was hoping per his usual … to react by attacking women.

“Why not sue me instead of the ladies?” I asked Bill. No answer really.

Bill was skeptical that a person could allow themselves to be serially victimized :: but I explained that that is the whole history of victimization … dark loops feeding dark loops. He seemed persuaded :: like most old-school lawyers I’ve talked to are … by the story of U.S. Marine Colonel Frank Schwable. Col. Schwable :: an unquestionable patriot … was induced into treason {like dozens of other soldiers} by a series of manipulation techniques that have become the standard M.O. of the non-patriots who make up the self-help guru industry. I told Bill I’d email him a link to my stories about the science of manipuation :: but then I realized I didn’t have his email … so here you go Bill … my sheeple series.

Mr. Hanahan has put in a Freedom of Information Act request with Det. Willis at the Mt. Pleasant Police Department in an effort to see the full notes of the investigation which I’ve written about but refuse to publish. I asked him to take some time after reading that report to seriously consider the moral advisability of his continued representation of Mr. Coldwell in any non-criminal capacity … and most especially in any capacity that would do further damage to victims. We’ve agreed to speak again once he’s read the report {where he’ll find himself already mentioned as part of Leonard’s shenanigans}.

“Is Leonard Coldwell totally shitting in his criminal old-man pants?”