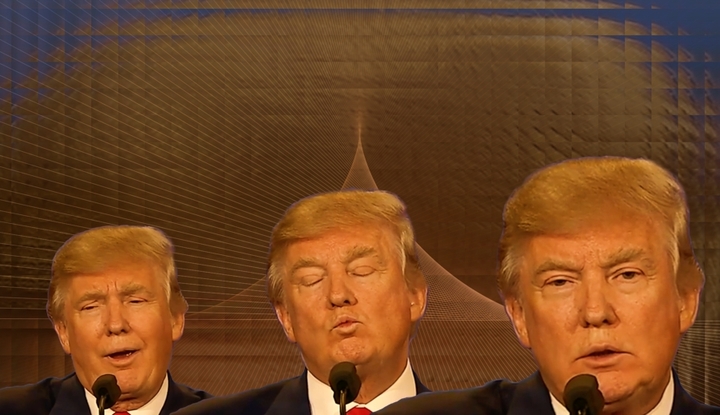 The big fat face that Donald J. Trump keeps beneath his combover … seems to be slowly melting into the area once occupied by his neck. Maybe his new neck face can grow a second mouth that will make him sound less of a goddamn dumbass?

This clowned-faced egomaniac :: full on scammer :: and proud member of Sarah Palin’s no-books club … lost the third presidential debate as badly as he’d lost the first two. But he did make some solid points along the way :: like …

I think that pretty much sums it up? The inane insinuations of an internet troll trying to recite from Breitbart/Infowars flashcards that he can’t quite manage to memorize. You could have a better conversation about policy with a cigarette smoking monkey … and you wouldn’t be lied to or sexually assaulted.

Here’s some of what you can expect in 2017 from Donald J. Trump’s next {scam supported} venture :: Trump TV … which is going to be exactly as successful as Tony Robbins TV.

Anyone who paid $17,000 to attend :: Fat Face Contortion 101 :: at Trump University … will immediately recognize some of these expertly executed jowl scowls and neck jiggles.