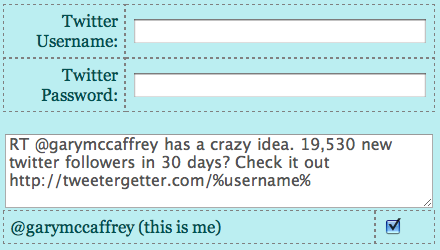 3. Chain letters don’t work because MOST of the people below you … WILL FAIL YOU!! If you wanted it to work you would need to apply relentless pressure on your followers to click though YOUR link. Then once they had, you’d need to stress the importance to them of relentlessly pressuring their own followers, etc. etc. etc. To make it happen, you’d need to destroy all of your REAL twitter friends. Thankfully, almost no humans will do this … so the scheme WILL FAIL to produce results.

4. D-Bag McCaffrey got an ass load of new followers because he gets followed by EVERY ReTweeter. He isn’t relying on the Chain Letter effect that he is offering you … or he wouldn’t have any new followers either.

5. When a message WITHOUT informational value is frequently repeated on a network … HARM is being done to that network. Maybe not skull-rape … but HARM nevertheless.

6. 0% chance that D-Bag Gary Galling has any clue what “exponentially” means! It’s a fucking complicated concept … even for a Droid.

7. Gary Galling doesn’t even give a shit about the followers!! He DOESN’T have anything to say. He’s an idiot! He doesn’t want to Twitter!! He’s just trying to CON as many people as he can into buying the $40 crap-n-turd taco that he links to in his SPAM BIO.

9. When you ReTweet Gary Galling’s Chain Letter Bullshit … you’re accidentally helping him CON a small percentage of people out of $40 (or worse if the scam deepens below the surface). Times are tough … let’s not help this D-BAG fleece our fellow tweeps.

10. No Hate for the (non-scamming) tweeps who sent out the Galling ReTweet. You just want you some followers goddamn it!! You want people to listen … to hear the shit that you got to say … to see the shit that you’ve made … and to help you build the shit that you’re building. You want a fair fucking shot at getting YOUR name out there. That’s Cool. The Droid can understand that completely.

The good news is that the NEW NETWORK can help us get our voices out there WITHOUT the scams and schemes of RAT FUCKS like Gary McCaffrey. Just keep it real .. and keep it up .. the people are coming!