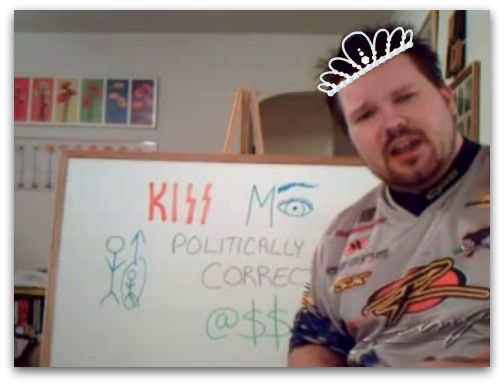 But still, some of them are fine! Like friend of The Droid Mike Fitz. Mike postulates that tweetergetter is a password harvester >> I know McCaffrey is a D-Bag so it wouldn’t surprise >> If he has harvested passwords, then he can sell that list to spammers/hackers multiple times and add another stack of dirty money to the rest of his ill-gotten gains.

Shortly after Mike published his post, Spastic Freak-a-Tron @JaceBarnett shows up to defend D-Bag McCaffrey. Because they ALWAYS do show up :: to every fucking event :: like incestuous polygamist relatives :: trying to defend their pyramiding way of life to the naysayers. _Frilly JaceMan’s _comment == {ramble ramble >> yada yada}?? > Exactly! Mike responds like a good person should. The Droid throws down {tamely}:

“Seems that JaceMan has an WELL ABOVE average interest in Mr. McCaffrey. Is it love? http://is.gd/jzWc”

links to a twitter.search result of JaceMan talking up The Gary all day, long and hard!!  >> Implying that the JaceMan isn’t a neutral observer >> he’s just one of the biaches!

JaceMan thinks The Droid is calling him GAY >> and overreacts disastrously! “Gay” is NOT an insult you stupid bastard! It’s a state of being which, in-and-of itself, is NEUTRAL.

He calls Mike out for not defending him against my perverted attack. Fuck that’s lame. Then he writes his own blog post ingeniously titled >> “Am I Wrong to Defend Myself?” << Yes, yes you are. And not just wrong :: IDIOTIC, DESPERATE, and SAD!!

“Anyway, when I defended TweeterGetter one of Mike’s readers decided to make a childish, homoerotic, suggestion about my sexual preference.”

Homoerotic?? That’s just classic Grade-A Stupid right there! You should really look words up before you use them JaceMan. There are plenty of free dictionaries online.

And this little gem in the comments: { … } = translation

“He{Cool Aussie Mike} may not have the guts {willingness/desire} to defend honor {my supposition that I’m str8}, but I do{must}. Your childish remarks {remarks} suggesting {reminding me} that I’m gay are crude, immature, and pathetic{random list of unrelated adjectives}.

JaceMan the Frilly wants to be a conservative talk show host when he grows up! Like Rush, or Bill O’Reilly, or mother fucking super-hero Glenn Beck!  >> but for now >> while he’s waiting to get less dumb >> he’ll just stick with disgusting homophobia tinged with self-righteousness and anger. It’s a good start fat tits …::… it’s a good start.