I’ve been looking for James Ray … have you seen him? He’s like a tall guy :: concave mouth :: spray on tan :: walks around like an angry chicken is nesting at the far end of his colon?

It’s not a big deal or anything :: it’s just that I found some of his pills near my grandpa’s socks … and I wanted to give them back. I know how serious it can be for a fake Samurai to lose his insecurity pills.

But alas :: I guess if you kill enough people :: and spend enough months “woohooing” “friggen brunette asians” … the sheen starts to wear off.

CNN has stopped covering the trial :: can’t find no Felicia Fonseca AP articles :: Larry King is dead {allegedly} :: and Oprah quit so she could find a way to be worse {not easy … but possible}.

So the James Ray trial has become a local only story about some out-of-town asshole. Not too big a story either :: here’s exactly how Mark Duncan’s article in today’s Verde Independent was presented to me :: about ten stories below the fold … 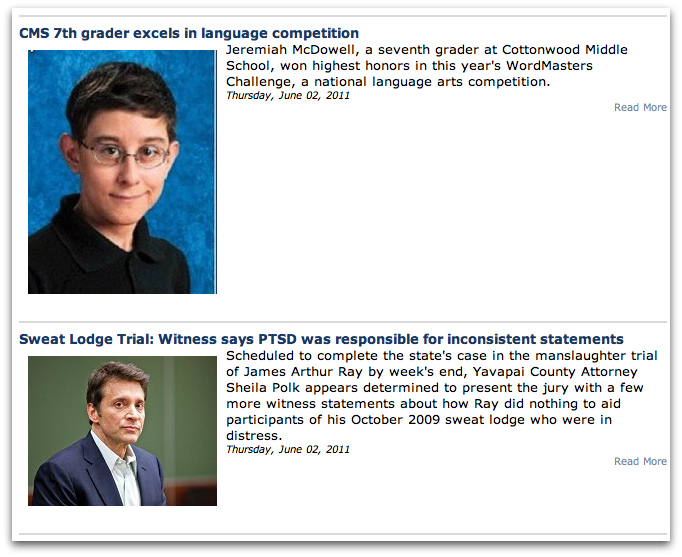 McDowell plays for keeps :: if he’s going to enter the WordMasters Challenge :: then he’s going to take nationals … it’s as simple as that.

“Let’s go ALL McDowell :: ALL the time :: this year” :: I said to Cottonwood Middle School WordMaster coaches Debbie Casson :: Trish Hutchinson :: and Paula Thompson. But they thought they knew better than The Droid and allowed other kids an opportunity to participate. Those other kids didn’t take nationals.

Well how you like me now Trish? Maybe next year you’ll listen … eh Paula?

Whatever. I get no respect …

Wait … what was I talking about?

He’s got no credibility.

He ain’t no celebrity.

And he won’t be getting out of jail until Jeremiah McDowell is old :: cynical :: and having a midlife crisis over the feeling that his whole life peaked at WordMaster 2011.