Most of the evil in the world comes about, not out of evil motives, but from somebody saying, “Get with program. Be a team player.”

The Sheeple in this experiment were all students at Stanford. Idiots :: Fools :: ChuckleHeads :: Brainless Rainbow Chasers? Nope! Smart as fuck :: over-achieving :: naive optimists. The editor of this blog {also rumored to be “smart as fuck”} applied to Stanford {Law} and received this letter in return …

P.S. Thanks for paying the fee sucker. 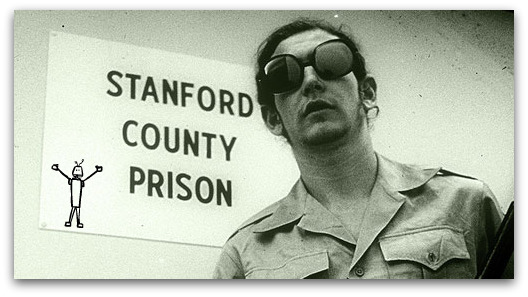 The guards quickly internalized their roles. Sunglasses at Night proved too powerful an intoxicant :: they quickly forgot that they were a bunch of spoiled Stanford pussies :: and started behaving like sadistic hard asses who’d had one too many pee-n-poop balloon splattered in their face.

Depressingly :: the prisoners also internalized their roles. They subjugated their individuality and identities and BECAME numbered prisoners. After just 36 hours one of the prisoner participants had a full fledged emotional breakdown.

The guards who weren’t sadistic :: said nothing to stop the guards who were. When a new prisoner was introduced to the experiment and objected to the BullShit treatment :: he was made the enemy by the other prisoners. How dare he rock the fake boat!

The experiment ended after just six of the scheduled fourteen days when a grad student {and Zimbardo’s future wife} pointed out that this BullShit was totally out of control and unethical. But to America’s eternal fucking shame :: the same experiment was run in 2004 {but this time with dogs :: blood :: and death} on the 372nd Military Police Company assigned to guard {… and torture} the prisoners at Abu Ghraib. 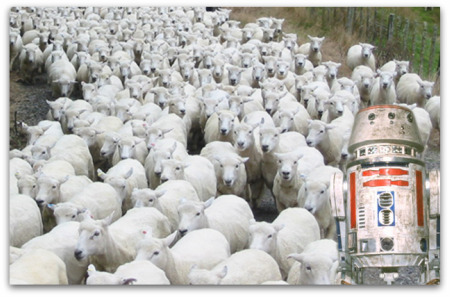 The Modern ConMan understands the truth behind these three experiments much more than The Modern Man does. The Con’s tactics revolve around the exploitation of these basic human tendencies.

Who were these idiots in the sweat lodge? Who is falling for these ridiculous Internet Marketing scams? Who gave billions of dollars to Bernie Madoff without asking a single question?

Pointing angry/judgemental fingers at the victims of these crimes {and cults} is the worst kind of mistake. As one Droid commenter {whose name is not important} put it:

“Social conformity and the blind obedience of “authority figures” is built into our genetics, and the more we try and pretend that “it couldn’t happen to me, because I’m smarter”, the less likely we are to spot the evil leader when he or she appears.”

Exactly! I can think of a certain “know-it-all” someone who needs to practice that right now.

EDITORS NOTE: Hi. My name is Jason, and I am susceptible to the sublimation of my individuality to social pressures that occur below my level of awareness.

Gr8 Job! The phraseology is arrogant {and prickish} :: but the message is humble and true. MeatBags are fucking weak in a group. Admitting you have a problem is the first step in blah blah blah.