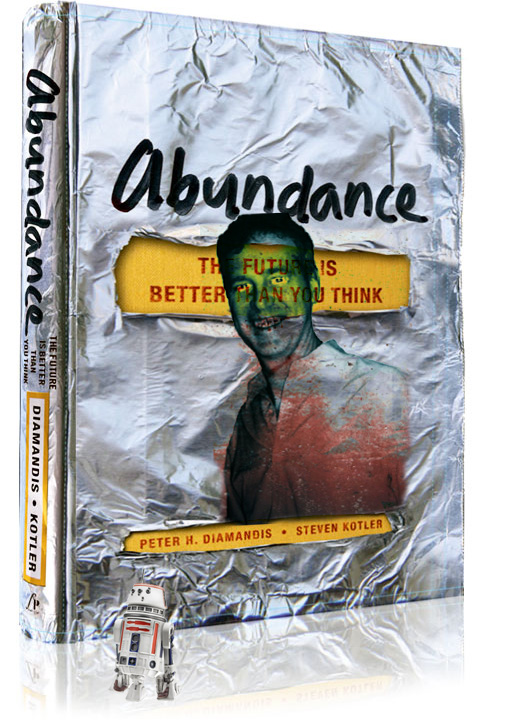 My fake secretary Debbie is on Ray Kurzweil’s email list because she’s all worried that medical progress won’t be able to keep pace with her “chain-smoking while tanning” lifestyle. She’d love to stop the smoke & tan madness :: but she needs it to cover up her diabetic pallor … so she depends on the science of future miracles for comfort.

I’d like to reach out to you personally about a new book that I am very excited about:

Abundance — The Future Is Better Than You Think. This book is written by my dear friend and colleague Dr. Peter H. Diamandis, Singularity University Cofounder and X PRIZE Foundation Chairman, and Steven Kotler, science journalist.

The Future Is Better Than You Think :: assuming you’ve been thinking about it of course … which {let’s face it} you haven’t been because The Future is not what’s on TV right now. What’s on TV right now? It’s a question AND a way of life :: one with scant little room for books about science by doctors who can’t write everything they know about math on to a single half-used napkin.

Peter and Steven intend to start a new conversation in the world — one focused on solving problems rather than just being gloomy about them.

Take that The Society of Let’s Just Be Gloomy About It Engineers :: go suck yourselves … in the worst way. You had your chance {I’ve just been told} :: and you fucking failed {hate to be gloomy but it’s true}. We’re going back to the other engineers now … the ones who actually do engineering!

Debbie took a pass on the pre-order :: maybe she’ll read a book next year or something.

The reality is that our future is a lot brighter than you think.

And this isn’t about some hippy-groovy law-of-attraction “land of milk and honey” thinking. It’s about cold hard facts.

This isn’t the hippy-groovy unicorn bullshit that Jeff & Pals are usually pushing on the unwary for life ruining sums :: this is actual information backed by facts … and hey if you want to conflate the two in your mind then that would be super awesome for Jeff Walker … professional bastard.

IMPORTANT stuff here people :: you NEED to “protect your mindset” … which is totally businessish and not in the least bit cultish.

To the dumb blog post where SuperCreep Walker tries to sidle up to Dr. Diamandis unbeknownst …

Wait :: an interview? … what the fuck? The sidling is totally beknownst? Uhmmmmm :: objection!

If I could puke :: I just would have.

MIT and Harvard trained :: but I guess he can’t use Google {or Bing even} to find out that Jeff Walker hurts people … real people … right now people not the future fucking inhabitants of the utopiamatrix.

1) You say you’re an expert on something {or on everything} … even though you’re undoubtedly an uneducated barely literate semi-moron.

2) You form a secret mafia like organization with other uneducated barely literate semi-morons :: go ahead and name it The Syndicate if you’re into descriptive naming.

3) Get other people in your mafia like organization to say that you’re an expert on something {or on everything} … even though they all know you’re an uneducated barely literate semi-moron {or a felon :: or a pedophile :: or a homicidal maniac}.

Thanks all major news outlets …

5) Sidle up on unwatchful people with real credibility {that’s you Dr. D} to further distort the truth of your idiotness … and the insane falseness of your unicornian claims.

6) Gouge the shit out of unsuspecting victims :: charging them thousands and thousands for price fixed idiot turds …

7) Ensure the total suck out of your marks by backending to a Utah boiler room :: you’ll get half the loot … or at least that’s what they’ll tell you.

Now youz gots monies and you can buy cars and blow and hookers and stuff … aka … abundance. It was so easy … and you only had to ruin tens of thousands of innocent lives in the process. Of course some of them will call you :: frantic and sobbing with fear :: and some of them will kill themselves … so this is where it’d be super useful to be a psychopath.

Dr. Peter Diamandis and Steven Kotler’s {science journalist} negligence is especially unfortunate given that the title of their book :: Abundance :: is the absolute g-spot of cult-scam-doublespeak.

They don’t mean that you should turn your back on your wife :: like Dave did to Alison … if she starts to gloomily wonder about the ethics of your unethical paycheck …

So in this :: my first fake robot book review :: I give Abundance – The Future Is Better Than You Think … one finger up.

I’ll bet you can guess which finger.