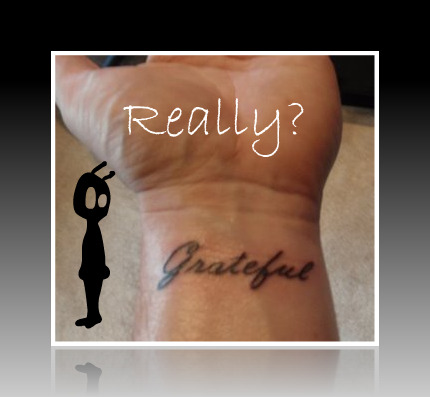 James Arthur Ray :: Death Ray! … that’s what everyone else is going with … Death Ray … it’s pretty cool actually. I’m going to accept it … I was thinking about something more like Rat Fucker {no good for TV} :: or :: You’re Dead to Me You Fucking Slime Licking Pox on a Pox Ridden Twinkie Eater Etc. :: a bit long and nonsensical. So Death Ray it is.

Who killed Colleen Conaway? Question not answered :: But it is in the NY Post {link}. The Post reports that Colleen’s body was found without identification {like the sweat lodge victims} :: and that

“After the jump, Ray and his staffers left the mall knowing that Conaway was missing from the group, according to authorities.”

The attendees had been stripped of their ID’s :: wallets :: jewelry :: phones :: and clothes. They were dressed up in ratty clothes and told to wander around like homeless people. An absolute necessity on the path to Creating Absolute Wealth.

Fellow seminar attendee AF Grant saw Colleen jump. He tweeted this on the day of the event {link} ::

Today with James Ray: wallets, phone, id taken and we put on old clothes to wander San Diego as homeless. I witnessed a suicide attempt :(

A couple of weeks later he further elaborated on his frowny face moment at the seminar {link} ::

“I spotted a woman standing outside the railing of a balcony on the third level at a mall. I thought it was some sort of stunt because ComicCon was going on. She jumped. It wasn’t a stunt. I was the only witness who had the vantage point to know it was intentional.”

AF Grant declined several glorious opportunities to speak with me {perhaps because I am a terrifying freak} :: but he did reply by email and in comment to his own blog ::

“I wonder if anyone with James Ray even realizes she was part of the seminar? I spoke to many staff members that day about what I saw, even James himself. It seems the seminar was over before she was identified - which makes complete sense because none of us had ID on us that Saturday afternoon. All CAW participants were roaming around downtown San Diego alone that afternoon. A security guard at the mall told me the jumper left her daughter behind on the balcony (that must have just been a bad rumor) but was one of many reasons why it never even dawned on me that should could have been part of our group.

I do not doubt that it was a suicide, but the fact that she was part of the seminar is certainly disturbing.”

I’d say “certainly disturbing” :: much like the frowning emoticon :: dramatically understates the fucking horribleness of this situation. Colleen is an out-of-place Midwesterner :: dressed in rags :: and looking like someone who has just spent the weekend at an 18 hour a day bizarro world seminar that AF himself describes as inducing “panic” and a “desire to run away.” None of that rings a bell when he sees her standing on the ledge? :(

AF tells the authorities that it was an intentional jump :: I wonder if he’s dressed up in rags that match Colleen’s at the time he makes his report or if he’s somehow found the time to change?

So James Ray walks out of the mall knowing that he’s leaving someone behind {dead}. AF {who just so happened to have witnessed and reported her “no doubt” intentional suicide} walks out having no idea that he just watched a fellow attendee die? Zero other attendees notice that Colleen is missing? The massive scene at the mall around a dead body draped in second hand rags doesn’t spark any brains into action?

Were Death Ray and his staff so unmoved by the events that they were able to continue on with the seminar as planned? Or did people notice the obvious :: and a change was made to the rest of the weekend’s curriculum? “We need to stick together. Remember your lessons. Let’s only reach out to others who are living the Harmonic lifestyle for true comfort … the Non-Harmonious do not understand the beauty of our transformational transformationals.” {link}

Colleen’s sister Lynn {who actually knew Colleen} :: has more doubts about the intentional nature of her “suicide” than random jackass AF Grant. From the NY Post article ::

“I had just talked to her two days before, and she was still the sister I knew,” said Lynn.

“I can’t even comprehend what changed, what went on in those two days that would cause her to do this.”

What went on was the malicious influence of Death Ray and his staff of soulless thugs. Cassandra Yorgey’s kickass article about the recent Spiritual Warrior event gives a good indication of the kind of psycho bullshit this freak was pulling. In one “James Ray Game” :: Ray casts himself in the role of God and then “kills” various participants. Fake dead participants are covered with a blanket and other participants “die” if they are unable to remain still. Sleep deprivation :: dehydration :: starvation :: death fixations :: god complex :: trouble.