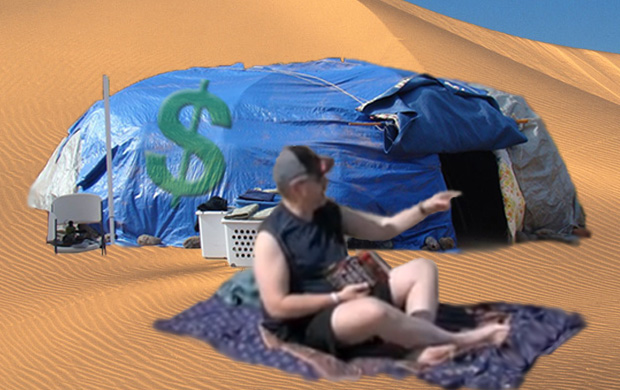 A short time ago :: in a galaxy called ScammerNet Marketering 5.0 beta :: there existed a dumpy little troll that we call Not-Doctor Harlan Kilstien {because he isn’t a doctor}. The dumpy troll needed to sell a lot of scam product to pay for his fake-pimp lifestyle {drivin’ roun’ Boca in a super dope sleeveless T-shirt :: shoutin’ at da hoes :: windows quarter way down pumpin’ Counting Crows latest CD at 4.5 - 5 on the factory speakers :: joinin’ all the freshest ‘masterminds’ :: shit like that}.

But times are tough out there for scammers. Especially for ugly ones :: with ugly souls :: and ugly lies :: and ugly lives. Oh and then there is this Droid … he’s like … kind of been a problem.

Without enough fresh kills to support daddies demons :: Kilstein turned to retapping his list of previous victims. Is there anyone with a single penny left that he could suck dry?

One person who was reminded of Kilstein’s continued existence via this “exciting opportunity” was Enigma Valdez. Enigma was a part of Not-Doctor Kilstein’s Six Figures Coaching Program in 2006 {this was in the days before Joseph Smith told Doofstein about the Seven Golden Tactics}.

Enigma was working two lame jobs :: and going through some rough times {which I vouch for but don’t reveal}. He can write :: so he likes the idea of writing copy for the Internet :: making money from home.

Harlan’s classy sales materials consisted of trolling around the AWAI forums {a forum for copywriting types} :: calling the AWAI people and programs bullshit scams. He made a terrible video about it :: because he’s just that much of mother fucking douche. He was eventually booted from the forum because :: and this is just pure speculation :: he was bashing it and using it to sell his crap at the same time.

Unfortunately :: sales were made.

Kilstein :: unlike AWAI :: was the real deal. He’ll make you rich :: and famous :: and maybe you’ll start to develop a man fetus inside of your Yoga stomach like the Guru himself. Six Figures … that’s what lil’ ol’ you could make. The dumpy man beast was bringing in Seven Figures :: natch!

Enigma didn’t have the money :: But he was going through tough times :: His parents love him and want him to succeed :: None of them knew jackshit about the Internet. So his parents agree to pay :: and Enigma enrolls in the coaching program. The money is taken from his step-father’s business account via PayPal. The money in that account comes from the performance of contract janitorial services :: A much more rigorous task than Boca fake-pimping.

As long as he’s willing to “work hard” he’ll be making six figures in no time.

The “coaching” was just a series of weekly group calls :: Harlan rambled :: burped liquids :: paused awkwardly :: and told you to buy other books and junk you didn’t need. Over the course of the year Enigma {who bought the additional materials and did all the “assignments”} received less than 60 total minutes of coaching time with the ManBeast. Sure :: in retrospect that was one of God’s small blessings :: but it’s still a fucking fail of a coaching program.

At the end of the year an “expensive” seminar was put on :: if you were a part of the coaching program you got in “free” as part of the raping you’d already received. The seminar :: of course :: was a pitch fest for a bunch of other shit products :: with the Not-Doctor getting a big taste of whatever crap got eaten.

Special Bonus :: Get a DVD of the seminar {the grand culmination of everything you’ve been training for} :: which you’ve already paid more than $6,000 to be a part of :: if you are willing to give Harlan a testiphonial for his gem of a fucking coaching program. Enigma tries to circumvent Sandra’s tyranny and just get the fucking useless DVD :: No dice :: Do the fake testimonial … or sod off.

Meanwhile :: back in reality :: Enigma’s not making a mother fucking cent. Because Kilstein is a liar :: and the things he’s selling are not real.

Program over :: Step-Father’s workin’ man account is billed for two more months. $1000 extra! :: just as a kiss goodbye. Calls are made :: Kilstein and OTC Publishing refuse to stop the billings or refund the money. PayPal is contacted and after much hassle :: charges back the extra $1000.

Overall :: a horrible experience. Enigma would love to get his Step-Father’s money back :: but he’s spent the year watching Harlan in the forums :: and it hasn’t been pretty. If you cross Harlan {or defend rape victim advocates} … he’ll stoop to anything to exact his vengeance {anything that a 13 year old boy could think of}.

When Kilstein tried to re-fish in old waters that still stank of his pee :: He pushed Enigma to The Salty Droid. His Step-Father has recently had a heart attack and had to have surgery. Things are even tighter than they were before … and those Internet Monies never did come. Now demanding that refund for fraud :: misrepresentation :: and uselessness sounds much less scary {but still pretty scary}.

The Droid is orchestrating this battle :: All messages from any party go though me. Kilstein was put on notice of this demand for a refund by Enigma, his Step-Father, and The Droid.

What was Harlan Kilstein’s response to this hard working family of nice people?

1) He starts tweeting incessantly about a refund request from a non-student.

“When NLP backfires. You accidentally hypnotize someone to think he was in your coaching program.”

“Ah. The person behind the racist emais is now backing an extortion attempt. What will little minds think of next?”

But Enigma was in his coaching program :: and paid in full. There is no confusion. And speaking of little minds not thinking … what racist emails?

Kilstein claims that someone has been signing him up for email lists with the name “Nigger” :: So befluxumed with this racial effrontery :: Pasty white Boca Kilstein has to take his plea into the public twitters :: Cause you know … it’s totally cool to say nigger whenever you want to create a mild distraction.

I think it's pretty pathetic that some schizo is encouraging people to email me calling me "Nigger". Makes you wonder wonder who they are.
— drkilstein (@drkilstein) October 8, 2009

Off Twitter and email for 2 day Jewish holiday, come back to dozens of "Dear Nigger" emails. Who are these sick people?
— drkilstein (@drkilstein) October 12, 2009

@gareththomasnz Getting emails addressed Dear Nigger leads me to wonder what people are thinking. Are they?
— drkilstein (@drkilstein) October 9, 2009

So step one :: deny the existence of a claim that exists. Falsely accuse the party making the request of damning {reputation destroying} racism. And what the fuck :: why not go all in and call it an extortion attempt?

2) The public cries of racist extortion are backed by a private effort. Harlan has one of his stupid bitches {Anthony Coyne} :: Send Enigma this friendly little email at around 2am … approx. 1 hour after the first refund request is made by the Step-Father.

Because he’s throwing yout name around?

Give me a call when you get a chance.

This is serious because Harlan is about to go to the FBI with an extortion case.

Your name’s come up and I want to make sure you’re clean.

Well isn’t that “friendly” of Anthony? Passing on a laugh-out-loud stupid threat for his slow to pay out sugar daddy :: what devotion he’s shown … hope he gets a kiss from Harlan because I have a few “rewards” planned for him as well. Interfering with one of the The Droids quests is a bad idea :: Dream about it Anthony … then maybe you’ll be ready for it {but probably not}.

3) The final crazy piece in this pie of spastic intimidation :: A letter sent via UPS Overnight to the home of Enigma’s parents :: Where his Step-Father is convalescing from open heart surgery. The letter explains that a refund is not in order because although they paid for the coaching … they weren’t actually in the program. This might make sense if you are an insane person :: but it sounds of pointless gibberish to The Droid. 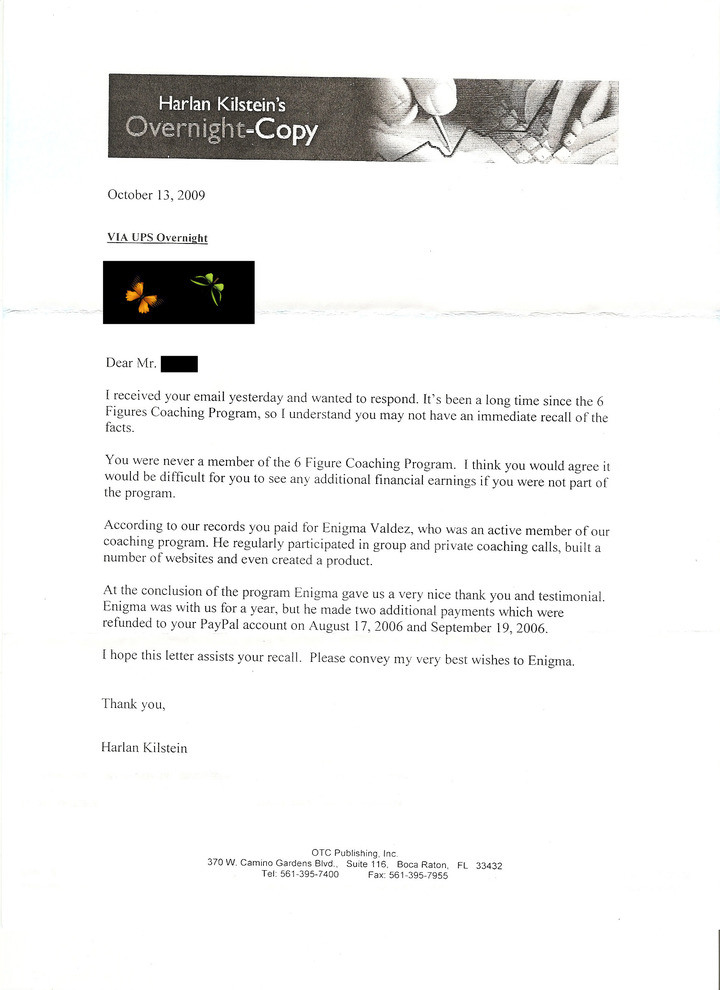 Your tactics bring shame upon man and beast. Your threats, lies, and badgering are meaningless. You have taken a significant amount of money from a working family and returned to them nothing but suffering and self-doubt. The fraud and misrepresentations you used to sell your “coaching” program were criminal and despicable. The program itself was of zero actual value. You will refund this money by November 20th, 2009 … or a campaign to bring you to justice will begin in earnest. Other victims will be found, and a concerted effort made to bring you to the attention of any of the numerous law enforcement agencies having jurisdiction over you and your fraudulent activities.