Long Trips to the Mall 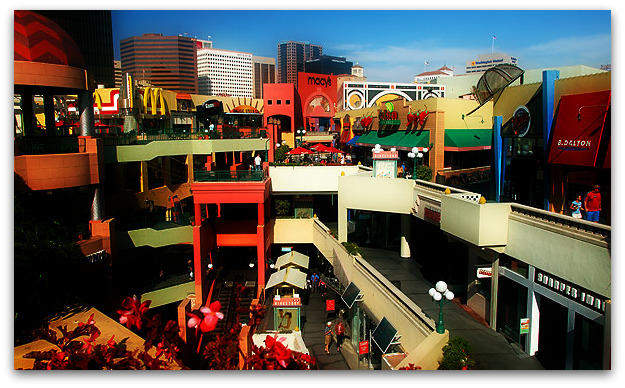 Colleen Conaway died at the Horton Plaza Mall on July 25, 2009 while attending a James Arthur Ray event in San Diego. As I’ve previously reported … this event was not previously reported. Colleen’s death was treated as a suicide by the local press and law enforcement. That is unfortunate :: because the circumstances surrounding Colleen’s death darkly foreshadowed the recent horror show in Arizona.

Colleen’s sister Lynn was kind enough to speak with The Droid {thanks Lynn!} :: I’ve also spoken to other attendees of the Creating Absolute Wealth seminar who are not anxious to be mentioned on this forum. The damn near snarkless details below ::

Prior to her association with Death Ray and his band of Demon Thugs :: Colleen had not been a regular attender of seminars :: or a person particularly devoted to the self help movement. She was just kind of a normal, fun, outspoken lady who liked normal stuff.

Lynn wasn’t certain how Colleen first started down the path with James Ray :: But the first that the family heard about it was when she traveled to Minneapolis to attended the Harmonic Wealth Weekend. This is the lowest level program in Death Ray’s manipulation curriculum :: but the basic outline is the same as at all of the Ray events. Long hours :: blatant manipulation :: psychological torture :: participants pushed to their limits and beyond. Strip away the lies and each of the events has only two goals :: 1) Sell you on the next hustle, 2) Increase your slavish loyalty and perceived dependency on the Fearless Leader {so that later it will be easier to sell you on the next hustle}.

The Harmonic Wealth Weekend was a major success against poor innocent Colleen. Such a success that Colleen was manipulated into purchasing one of Ray’s most expensive events :: The Spiritual Warrior in Sedona Arizona. Yep! You heard that right :: Had Colleen survived Ray’s July seminar … she would have been in the sweat lodge. If that detail isn’t enough to get the regular media talking about Colleen :: Then it’s possible that George W. Bush will be re-elected in 2004 … oh wait.

But for some {evil} reason Colleen just couldn’t wait until October to be back with James Arthur Ray. She added two other Ray events to her schedule on short notice. Taking unexpected road trips :: spending money she didn’t have. One event was in St. Cloud, MN :: The other in Chicago. At the Chicago event Colleen participated in the damaging ‘board-breaking’ exercises that have been reported elsewhere. She came back injured :: and changed. Suddenly she seemed more serious. She eliminated all ‘negativity’ from her life :: filtering out news and events that weren’t in conformity with her new “Harmonic” views.

After Colleen’s death Lynn found that she had been filling out 3x5 cards with what looked like James Ray’s sayings or directives. They were all over Colleen’s house :: Hundreds of them :: Along with spiral notebooks full of similar gibberish. Colleen had been directed to keep a list of her ‘old limiting views’ and her new ‘harmonic views.’ Lynn sounded anguished recalling her feelings at seeing that Colleen had lined though many of the values that 2008 Colleen would have treasured. Scratching off pieces of herself :: one at time :: replaced with empty lies.

Colleen decided to attend the Creating Absolute Wealth seminar on very short notice. She paid $2000 for her late date airfare and arrived at the hotel {$687 for the weekend} on Thursday for the $4,000 event. Colleen and Lynn and a nice conversation on Thursday night :: Lynn suggested they talk again on Friday :: but Colleen {by now a Death Ray veteran} knew that wasn’t going to be possible due the “intensive” nature of the Ray events. The was last time they spoke :: and perhaps Colleen’s last phone call.

On Saturday attendees are dressed up like homeless people and shuttled off to various locations. Their wallets and ID’s are apparently confiscated by James Ray and his staff … not just voluntarily left behind in the hotel {not 100% sure of that … please confirm if you are privy to the details}. The group that includes Colleen ends up at the Horton Plaza Mall.

While they are at the mall Colleen steps off of a third story ledge and dies. AF Grant :: a fellow attendee :: reports witnessing the ‘suicide’ without knowing it was someone from his own group.

Colleen’s body is taken to Medical Examiner’s office where it is labeled Jane Doe. Jane Doe lies alone in the cold for more than 8 hours before James Ray’s staff calls mall security to ask about a ‘missing’ attendee. Security directs them to the Medical Examiner’s office. Shortly after Colleen’s ID and personal effects are brought in. Ray’s staff tells the examiner that Colleen had been separated from the group and that they didn’t know what had happened. Their stay was short :: and they were never heard from again.

Video footage from the Mall seems to confirm a suicide in that Colleen is not pushed or forced over the edge. So other than the autopsy {which showed nothing unusual} :: it seems that no investigation was ever performed … and there was certainly no investigation into the James Arthur Ray connection.

Colleen’s phone contained several messages from frantic sounding James Ray Staff inquiring about Colleen’s location. This fact strikes The Droid as very sinister. They KNOW good and god damn well that Colleen doesn’t have her phone with her :: So who pray tell are they calling? It’s sounds like the most direct evidence of a cover-up so far revealed. Fortunately for Justice :: Lynn still has those messages.

It’s not clear exactly how much money Colleen spent with James Ray over the course of 2009 :: But what is clear is that she couldn’t afford it. Colleen was a women of modest means :: and modest tastes. She drove an old car :: and wasn’t one to quest for purely material gain. James Ray International billed Colleen more than $10,000 in July alone … and at least $22,000 in total. Not including airfare :: lodging :: food :: or other associated expenses.

No one from James Ray International ever called Colleen’s family :: and no refunds were issued. Not only did Colleen have to pay James Ray for the event that took her life :: She paid him for an event that she was too dead to attend .. were others tragically died.

It’s time we stopped talking about the James Ray event in terms of negligence :: building permits :: and plastic coated sweat lodges. Something much more sinister is going on here. A pattern of long term abuse and manipulation :: the targeting of the good and naive :: grinding up people like meat for profit and then covering up the blood. These things aren’t accidents :: they’re in the fucking business plan.

… and I’m feeling short on jokes.