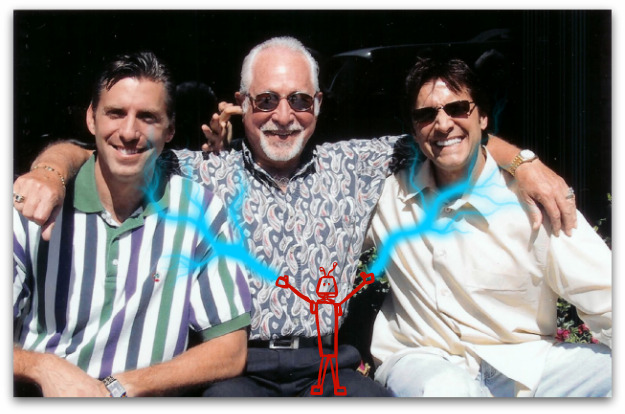 The Salty Droid was sleeping off a 2 day bender of attack blogging :: the results of which marked the beginning of the end of Perry Belcher {fond memories link} :: and the immediate end of my much loved {at least by me} Twitter account.

Greg Hartle {seen here partying like it’s 1999} :: one of the senior staff members at James Ray International :: still had his Twitter account on July 25th and micro-blogged this upbeat gem at 1:54 pm pacific …

Well Greg :: she’s going to need more than your love. Like just as a for instance :: HER FAMILY COULD USE A FUCKING REFUND :: for all the money your company took from her in order to render her dead. But I’m just throwing that out there … I’m sure your “love” is super valuable too.

Here is the link to the Tweet {oops link} :: but you’ll find you can’t see it because soon after today’s hero @RWRenfrew retweeted the post for truth and posterity :: Greg went into Twitter hiding and made his Twitter account private. I wonder why?

The bus that arrived in the area of the Horton Plaza Mall just after 1:00 pm on July 25th contained Colleen Conaway :: AF Grant and his wife Lori :: James Arthur Ray {probable pig fucker} and his bother {pictured above with his also scammer father} :: Michelle Goulet :: Greg Hartle :: and a boat load of perplexed folks dressed in rags. Walk around and experience the homelessness “full on :: all out :: ra ra” and then come back to the bus no later than 4 pm {PS: Sorry about taking your watches … envision yourself “growing” from a time deadline without a time piece}.

1:43 pm :: Almost immediately after arrival :: Colleen goes over the edge. There are children below waiting to see a Ninja Turtles exhibit :: Nothing could have made Colleen jump in front of those kids. NOTHING. But it wasn’t Colleen at all :: something was very wrong :: 1:43

Eleven minutes later :: at 1:54 :: Greg Hartle whips out his iPhone {because he’s NOT on a spiritual journey via fake homelessness} and tweets about it.

8:15 pm :: Michelle Goulet calls Colleen’s phone {which JRI has} and leaves a message pretending to look for Colleen. Fifteen minutes later at 8:30 she calls mall security :: she tells them she brought a group to the mall at 2:00 and that someone is “missing.” She is told of the death and referred to the Medical Examiners office.

10:00 pm :: The Droid previously reported that James Ray staff brought Colleen’s ID and belongings to the ME’s Office. But it seems they didn’t even have the time or decency to do that :: The positive ID was made on Colleen’s body when Michelle faxed over a copy of Colleen’s ID almost eight hours after Greg watched her die.

10:15 pm :: Tina calls Colleen’s cell phone and leaves another fake message :: “Where are you Colleen? Oh that’s right … we just identified your body on the record … well call us back if you get the chance.”

It doesn’t make sense because that’s NOT what happened. The Droid has learned that Colleen was NOT wearing the homelessness costume. She was wearing a black skirt :: yellow tank :: white blouse :: and her Nikes. Apparently our friend Colleen may have made the mistake of resisting the authority of fake-god James Arthur Ray.

AF Grant didn’t recognize Colleen because she didn’t look out of place :: She just looked like a lady in the mall.

But what about Greg Hartle? How could Greg not recognise Colleen when she was in defiance of God? Remember that these aren’t nice people. This whole game is about group conformity and extremist coercion. From one of Cassandra Yorgey’s interviews with a former James Ray event attendee :: Lorena just had her arm broken while playing in one of Ray’s stupid games …

“She was obviously quite shocked and proceeded to the back of the classroom where the James Ray staff blocked her from exiting. She told the staff that her arm was broken and she needed to go to the hospital. The Dream Team told Lorena “Picture yourself playing Tennis” and tried repeatedly to make her sign a release form.”

These assholes play for keeps. Greg and Michelle know what Colleen is wearing :: because it’s their job to make sure Death Ray is not defied :: and that peoples FAT paychecks keep rolling in each week. Colleen’s yellow tank top is a threat to their job security.

What methods were used to try and get Colleen to conform?

Who was responsible for delivering the harshness?

If Colleen didn’t want to participate :: why did they still take her phone and identification?

Was Colleen singled out for abuse on that Saturday morning before the bus headed out?

Someone should tell the robot :: because justice is crying about Colleen :: saltydroid@gmail.com

{Note: The Droid has reported that the security film from the mall seemed to show that Colleen jumped. That is incorrect :: there is no video.}