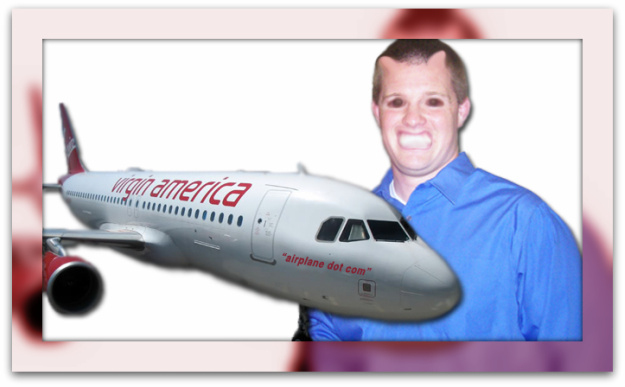 Quick shout out to the Hypocrite Saint Russell Brunson. Recently Russell “generously” donated $50,000 of the money his boiler room hustled off of unsuspecting victims :: in order to name one of the Virgin America planes {whoopty fuckin’ doo}. I thought maybe he could use some help coming up with something original {dot com}.

Russell gives {venereal diseases to glasses of milk} :: and gives {‘kay?} :: and gives {the only thing he does more is take}. This past August he took part in an effort to raise money for the Just Like My Child foundation by selling people on his useless bullshit hussle. The event was called Paid for Life :: because if you act now you can be “paid for life” :: I guess :: I don’t know :: Let’s face the facts :: The Koenigs/Glyck family totally sucks at nomenclature.

Speaking of the Von Doofuldorfs :: I mentioned them in last week’s Monday post :: quite charmingly titled Just Like My Party. Often Droid posts have many words {most of them cruel and foul .. ftw!} :: but very simple messages. The messages are usually missed {because you people really are stupid}. If you were following along with the crypto-decoder ring … you would have read the Just Like My Party post like this …

My wife? Really? I mean are you fucking seriously? Start thinking of a nice way to apologize :: and let it not be false flattery and cheese dick attempts to manipulate :: cause me no likey that either.

P.S. Don’t invite Andy to any of your parties :: especially if you are doing something that smells “fishy.” Unless :: of course :: you’re a fan of white hot heat crawling right up your ass.

Just Like My Child is a complete scam. Burn everyone involved as a witch.

The reaction was unpleasant :: not awash in the spirit of caring. A very unusual number of people were interested :: and the post shot into the Top 10 all time in three days.

Well isn’t that interesting? I had no idea it was such a big deal. Thanks for telling me by unreasonably freaking out!

Some snooping says they have been effective fund raisers :: numbers like 600k - 800k being thrown around. Holy shit! Can that be possible? And most of that money sounds like it comes from people inside of the Internet Marketing community. Because contrary to the views of the majority of outsiders :: the Internet Marketing community does have lots and lots of genuinely caring and decent people.

COME ON YOU GUYS!! Give me a fucking break! You are Internet Marketers … you KNOW what your world is like. Why … why oh why … would you route your charity money through another Internet Marketer? Do you just love to suffer or something?

But maybe I’m wrong. Maybe there is nothing “fishy” going on after all. Maybe the overreaction was due to all the innocence.

This screen capture from the Paid for Life promo video did help put me at ease. 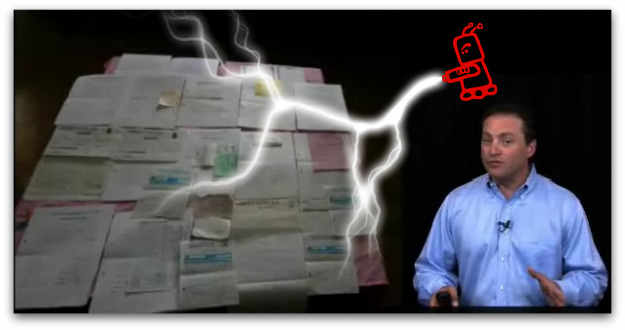 “Every single transaction is painstakingly maintained. We know where every penny goes, and ALL the money goes to the people there. This is a very very tightly run ship.” ~ Mike Koenigs

It’s the Giant Pin-up Board method of accounting. G.P.B. is considered “too transparent” by many of the stodgy old accounting elite. Buy JLMC is cutting edge in all of its practices. No expense is to small to get pinned to the board :: and/or placed onto a pink tablecloth.

So what percentage is passing through? I’m prepared to accept the bulletin board full of receipts as conclusive evidence that it’s not 0%. And we’ll all agree to rule out 100% because this is a site about scammers. So what’s the actual number?

In the spirit of Christmas :: I offer the Just Like My Child foundation one day of free consulting. Let The Droid take a tiny little peak at these “painstakingly maintained” books. I’ll calculate the data for you {becuase math is hard}.

If I was wrong and there is no fishiness :: then I was wrong. I will tell myself to go fuck myself :: and give Just Like My Child my coveted Not A Scam {probably .. right at this moment at least} Seal of Tepid Acceptance. Just because everyone involved looks like total bull crap :: that doesn’t have to mean that the opaque charity they hold absolute power over is also total bull crap.