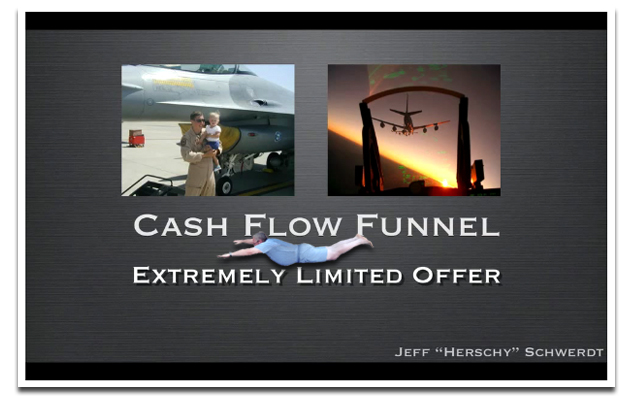 Question :: Who is Jeff “Herschy” Schwerdt?

That is technically the correct answer :: but it’s a bit short :: expandification required …

Jeff “SkidMark” Schwerdt is the Father {aka non-vaginal birth giver} of the Cash Flow Funnel. This is an “Extremely Limited Offer” :: in that almost nothing is on offer. Get in NOW before it flows the rest of the way down Jeff’s leg and on to the ground :: wisdom lost forever!

But Jeff is not just about funnels and regulating his flow. He also describes himself as a member of Frank Kern’s “mastermind” {minds not required} :: where he learned everything he doesn’t know. And he helps “raise money for charity” :: specifically he spoke at the last Paid for Life event to raise money for the Just Like My Child Foundation {tax write off not included}. How magnificent of him.

SkidMark describes his own journey here :: I think you’ll find he has a gift for sucking at words …

“His biggest childhood dream was to become a pilot.. He was promised by his parents that if it was still a goal by the time he reached age 17, he could begin flying lessons. True to their word, he started flying training, and working toward his pilot’s license shortly after his 17th birthday.”

Thanks Mom for making my biggest big-boy dreams come true!

“… he began experiencing minor back pain. Ever the determined one, He continued to fly. Unfortunately, only a few flighs later, he found himself unable to sit for more than a few moments, and his pain was multiplied, augmented by the inability to sleep.”

Ruined :: like so many others :: by multiplied and augmented minor back pain. But still ever the determined one :: SkidMark decided to make up a new big-boy dream {and this time he wouldn’t need Mommy’s help … probably}. It was time to teach the world what he knows best :: marketing! Wait … what? What the fuck does Jeff Schwerdt know about marketing?

Working side-by-side and attaining secrets from some of the best marketers in the business has kept him motivated. (Not to mention the great levels of success he was realizing.) Jeff describes the experience”like a two-year Master’s program in marketing crammed into a few short months.”

The Droid describes Jeff’s description of Jeff’s “Master’s program” as being “borderline rotten broccoli :: lying somewhere between LOL and the outskirts of LMFAO.”

Yes, you read that correctly.

Not only are we working with you over the next 8 weeks, providing Live Webinar Training, but I’m also giving you Turn Key Success.

We’re handing you a proven business model, live support, training, and we’ll do all the work on the back end to fulfill your orders. It can’t get any easier.

And of course :: you’ll also get an email for EVERY piece of shit product that the circle jerks are promoting. Jeff’s never seen an offer that he’s not willing to mail. $3,000 goat rape kits? Sure … why not? As long one of his “close personal friends” is behind the deal :: money is money :: and most goats are just asking for it with all of their limiting beliefs.

SkidMark must not be a fan of The Salty Droid :: and he must not have ANY friends in Internet Marketing :: or he would have known that mailing for Not-Doctor Kilstein was the best way to get the attention of the “worst fucking thing that has ever happened to us.” Almost no one mailed for Shitstein’s multi-thousand dollar frauduct launch {your welcome!} :: but Jeff and his Master’s in Marketing did. Oops! Well you got my attention :: /congrats

Step One :: Prove this d-bag isn’t now :: nor ever was :: a USAF fighter pilot. I mean come on! How could this little turd ball manage such a thing. Operation Investigation –> {it’s harder than you think … and time passes}. Oh Snap! Turns out there is a Captain Jeff Schwerdt on non-flight status at Luke AFB in Arizona. 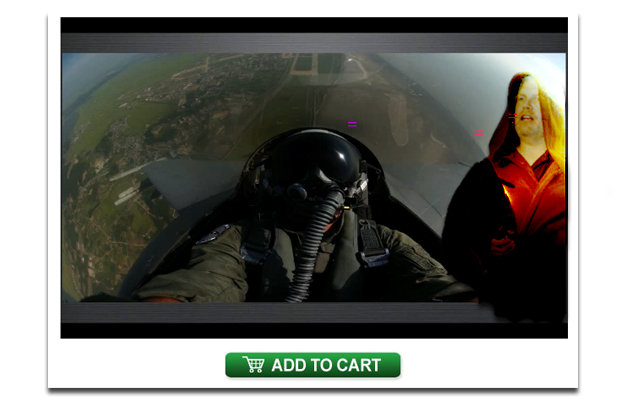 Hey Jeff :: you’re not still on Active are you? What are you fucking nuts?!? Guess what … your Mommy wanted me to tell you that you are finished in Internet Marketing. Yep Yep! Pack up your shit and leave. I know that this comes as a surprise to you :: what with all the success you’ve been having building “Five 6 figure business in just 6 months” :: and having “made 250k in just 6 weeks” :: but I’ve been doing some reading. Did you know that the military has its own laws :: which it enforces in its own courts? Yep :: it’s true. And then they handle the punishment as well … have their own prisons and everything. It’s crazy … almost like being a sub-citizen. You sure wouldn’t want to violate any of the laws of the Uniform Code of Military Justice like …

Mutiny or Sedition :: not good … punishable by death.

Being a Spy :: pretty cool … but still bad … punishable by death.

Dueling :: forget about it.

Raping a lady that is not your wife :: you definitely shouldn’t … “however slight” a penetration you were planing.

oh and then there’s this …

(a) Any person subject to this chapter who wrongfully takes, obtains, or withholds, by any means, from the possession of the owner or of any other person any money, personal property, or article of value of any kind–

(1) with intent permanently to deprive or defraud another person of the use and benefit of property or to appropriate it to his won use or the use of any person other than the owner, steals that property and is guilty of larceny;

Winner! I sure hope that Captain Fantastic wasn’t lying about all the massive financial success he’s had online in order to sell his expensive BS products … that would not be good.

And don’t forget about DoD Directive 1344.1 :: Wearing of the Uniform :: which strictly prohibits the use of the uniform in private commercial activities.

Or the Joint Ethics Regulation :: DoD 5500.7-R :: subsections 3-209 - 306 :: which prohibits the use of uniforms :: pictures of personnel in action :: or anything else that may imply an endorsement of a non-Federal entity. It also requires that DoD employees get prior approval for outside employment and business activities.

I don’t doubt that Jeff “SkidMark” Schwerdt filed all the proper paperwork with the USAF and got permission to use all the kick ass military stuff to sell the Cash Flow Funnel. I also don’t doubt that he’s reported his dubious associations :: and the “MILLIONS” of dollars worth of secondary income that he claims to be collecting. But just in case he hasn’t :: and because I’m such a fucking giver :: I’m officially volunteering to make sure all the proper reports have been filed.

No need to thank me Jeff :: as you’d know if you were a regular reader :: the pale faced editor’s only sister just so happens to be a lawyer in the USAF JAG Core :: so getting “on the horn” with the Public Affairs office at Luke AFB will hardly even be an inconvience.

Or maybe Jeff is packing up his shit and moving out of ScamWorld {within the next two weeks} :: maybe all of his sites and squeeze pages are a being eradicated like the plagues they are :: maybe Jeff just remembered that some things are more important to him than taking money and promoting Harlan Kilstein.