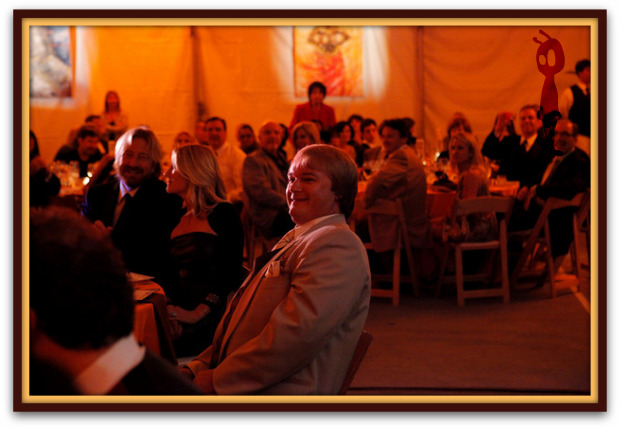 Andy Jenkins and Frank Kern :: they hardly know each other :: except for during the moments in which they are best friends forever {no tongue … well maybe … who knows}.

Looks like Andy has made a few recent trips to the pork store {probably for pork!}. His quantum mass has increased by 40%. The Droid recommends a change in mindset :: and Bacon Lite.

Where once there was a neck :: now there are only memories :: and rolls that leak sweat. Don’t blame Andy. He’s just stressed out about his life collapsing all around him :: and about how he’s always been **NOTHING **but a sham. It can be tough on a girl. It’s the same thing that inspired him to get the “Hitler as a Boy” haircut. And why :: we’d assume :: underneath this ridiculous suit he’s wearing an old fashioned cloth diaper with a pink pin … just to complete the effect.

Andy is at a fund raising event because he’s just such a nice mother fucking guy {I hadn’t noticed that}. He wins the signed Deepak Chopra book at the auction {the chance of a lifetime!}. Having achieved this manly triumph :: his first in many months :: he stood and Struck-a-Pose … 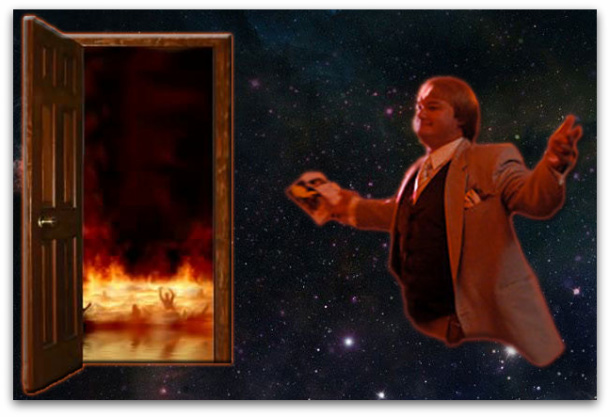 The fundraiser :: an “African Thanksgiving” {that doesn’t make any sense people}:: is to raise money for the Just Like My Child foundation. You know :: because African kids are human children too … just like our beautiful little white children. Sometimes people forget about that … it’s so hard to feel empathy for children that don’t look like your own {and don’t bitch about not getting enough Ritalin and Nintendo time}. But if you close your eyes and say “it’s just like my child” :: you might be able to trump up some emotions.

Just Like My Child was founded {recently} by a marketer :: Vivian Glyck :: That’s great! Africa badly needs better marketing. The Uganda “stay-at-home mom” niche is as of yet completely untapped.

“In 2007, inspired and awed by the love for her own son … She founded the Just Like My Child Foundation on the premise that every child in the world is deserving of all of the dreams, hope, education, opportunities, healthcare, and love that her son has been offered.”

Bold “goals” :: or something. And Vivian’s got the chops to make it happen ::

Harvard :: wow! :: if I believed that in the slightest I’d be super impressed. This sentence from the foundation’s one page Fact Sheet Pdf makes me doubt the Rochester claims as well …

“In many third world countries, the mothers are very pivotal to the survival of their families.”

Yep :: and as nations develop :: “the mothers” become increasingly irrelevant and are eventually phased out completely.

The fundraiser was organized by Mike Koenigs :: one of the dubious marketers helping to bring Tony Robbins and his LGAT bullshit to the Internet Marketing peeps. Who knows :: maybe they still have some money left to steal {but probably not}. Mike loves charity :: and giving :: it’s what he’s fake all about. 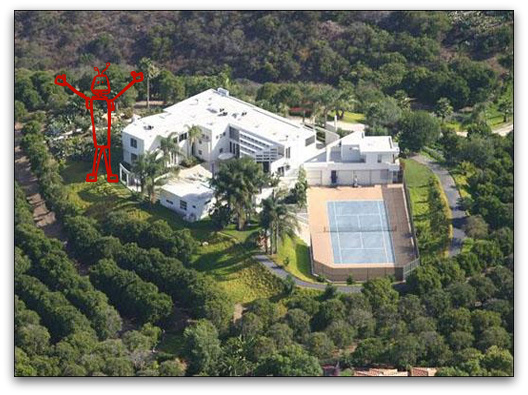 The party went down at the sick opulent home a found money fool named John Assaraf {the only possible place to hold an African Thanksgiving}. Guess how old John here affords to live such a pimp lifestyle even though he is as dumb as a board? Oh forget it :: I’ll just tell you. He’s another one of the parasites from The Secret. Here’s a wisdom bomb/turd …

“There’s a simple way to make your dreams come true, and to achieve success in your health, wealth, relationships, career and every aspect of your life. You can do this by creating a vision board …”

Who knew? John {like all the other Secret gurus} thought the udders would never run dry :: but they did. Udders are like that. He was already scurrying :: then James Arthur Ray killed a bunch of peeps :: that can’t have helped.

Seems an awful strange time for awful people to be giving away money. Something smells fishy :: like three day old sushi in the back of a repossessed Hummer.