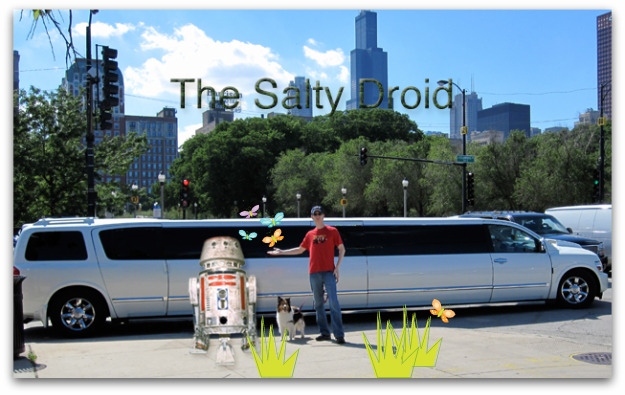 Salty Droid: So I believe we had established that you are a Mormon Internet scammer living in an RV down by the Mississippi river :: Does that sound right Teacup?

Salty Droid: I see you’ve thrown down more visuals :: looks fucking official :: you’ll excuse me if I don’t read it.

Jason Jones: The last post produced some very interesting results as expected, but there were still a few residual doubters. So please enjoy my law license, my law school diploma, and the envelope in which they remain permanently stuffed because putting this kind of crap up on your wall is really super douchey …

SD: Not to mention putting it up on a blog where you are pretending to be a psycho robot.

SD: So why did you reveal your identity guy? And a follow up question :: are you huffing paint?

JJ: Well the short answer is that “they” found me.

SD: I like to call “they” the circle jerks :: But you better explain who “they” are because people don’t know. If people knew :: if they had any idea of the extent :: there would be a full scale mutiny :: so let’s tell them! :: we have been sitting on this shit for WAY TOO LONG kid. Just Do It!

JJ: No not yet. We are hanging on to some of our cards {for now}. But we want to make sure that it is perfectly clear to “they” that we know that “they” exist …

SD: And we are not fucking amused …

JJ: No we most certainly are not.

SD: So how did these circle jerk mother fuckers find you?

JJ: Strangely, they started hunting for me almost immediately. Within the first six months two Private Investigators were hired to find me.

JJ: Yep! Not sure how that is possible because I was barely even hiding.

JJ: Recently, two new Sherlock Dumbs were brought in to crack the case. They have succeeded where others have failed. Turns out the Salty Droid is Jason Jones from Chicago.

SD: So after almost a year of effort :: four investigators :: near constant lame attempts at intrigue :: intimidation :: threats of violence :: threats of rape :: harassment :: etc. etc. etc. Bang! They finally found you. So what’s their genius plan?

JJ: Part one of the plan is to attack my wife Kate. They were hoping that they would be able to scare her enough that I would stop. They also, in defiance of even the most basic ideas about ethical standards, think they have a plan to get her fired.

SD: What? What? What? How the fuck is that possible? Even for these sick pricks :: I mean seriously? Seriously?

SD: Well I’ll bet we are none to fucking amused about that either! How do they plan to get her fired? Sounds way out of their league to me.

JJ: I don’t have all the details, but my guess is that their plan involves the exploitation of a very strange coincidence. Back in August someone posted the complaint from a lawsuit between Andy Jenkins and Brad Fallon of StomperNet. Someone pointed it out to me and I re-posted it to this site {link}.

SD: And I said a couple of brilliant fucking things about it.

JJ: True. But there was a shocker in the complaint you couldn’t mention at the time. The big fancy global law firm where my wife is an attorney, Paul Hastings Janofsky & Walker, represented complete waste of space Andy Jenkins in the suit.

SD: Holy shit! … but also so what? The complaint was public record :: and plenty of people know who posted it {NOT Jason you stupid chumps :: pay closer attention!}

JJ: I guess they thought they would accuse her of leaking confidential client info to me. They are going to be sorely disappointed. There is a simple procedure for dealing with these kinds of situations, and it was followed precisely. The conflicts committee was notified immediately {back in August} … and her access to the files was blocked. Easy. And because I heard about this ridiculous plan before it was executed {thanks everyone!}, steps have been taken to guarantee its failure.

SD: They are also planning on filing lawsuits in multiple jurisdictions to try and overwhelm you :: as you are just a man alone. That sounds like a pain in the ass :: I’m sure you are making plans to cut-and-run?

SD: Fuckin-A right I’m staying :: There was never any question about that boy wonder.

JJ: And we have a little surprise waiting for whatever brave D-bag files the first lawsuit. Over the last year the vast majority of the d-bags have criminally underestimated me. They have used all the bullshit, horrible, abusive tactics that they would use on one of the sheep who fell out of line.

Well now they are going to have to come to grips with a new detail in the story. I’m not one of the sheep. I’m not a marketer. I’m not an angry boy in his mother’s basement. I’m not a spurned partner. I’m not a damaged victim. I’m not Ben Mack.

You want to sue me? Go right ahead chickenshits! I’ll accept service of process {or boxes of cookies} at this PO Box:

Of course, suing me will grant me access to the vast majority of your accounting records, emails, files, letters, etc. If you want the damning info I find in that discovery process to remain private, you’ll have to ask for a protective order and show good cause. You won’t be able to do that … and I’ll fill the world up with uncomfortable truths about you.

Additionally, I recommend that “they” read this helpful little article on Wikipedia {link}.

If I sue you … maybe we do this thing one at a time. Maybe some people are given a chance to change or go away before their lives are fully ruined. You sue me … and I use joinder to pull ALL of your sorry asses into the case … and I get discovery on ALL of your files. If you thought you were going to share the costs of the attorney suing me then you were mistaken. I’ll force you each to hire your own guy {and it had better be someone good or I’ll wipe the floor up with you}. I know all of your names … and I know what you did last summer.

If there was ever any hope of me going gently into that good night … it died when you mentioned Kate’s name. You just forced a very nasty cat from its bag. I hope you enjoy the mauling.