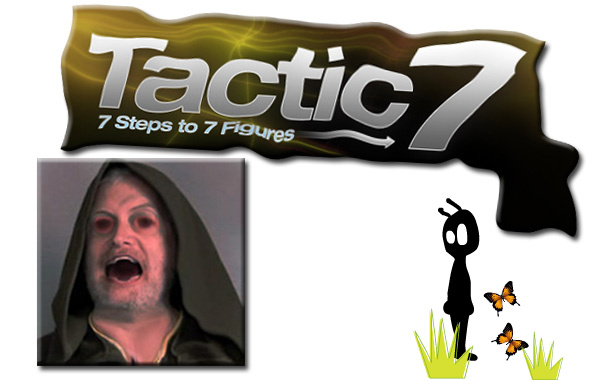 Not-Doctor Kilstein has zero problem with faking testimonials. He fakes them on his own sales sites {link} :: And he’ll fake them for others if he has a financial interest {link} … or was it for love? :: Hopefully we’ll never know.

Seven steps to seven figures :: Seven fucking figures :: That’s plenty of figures … probably two more than you need. I hope that his satisfied “customers” have built at least six figure businesses … I’m sure they have. But let’s check just in case :: Safety first!

The first two testimonials are from “Mac X.” and “David Z.” :: Harlan helped Mac build a $38 million per year business {enough to buy and sell Harlan 40 times over + buy a dive bar in Omaha}. David is well on his way to making $500k this year. Unfortunately :: neither can afford a last name. IGNORED!

Thanks “Helen” :: his voice is just so damned intoxicating :: like a dying manatee …

Thanks “James” :: I really appreciate that you’ve taken the time to use the word advertorial. Ads do get better over the time :: In a very similar way to cottage cheese and capers.

The Droid talks to Jill all the time on her blog and by email :: but she ignores me and deletes all my comments {even though most of them un-droid-ishly kind}. “Please stop this Jill … it’s insanity … and you seem like a nice person,” says me. “Why don’t you just fucking kill yourself you worthless fuck,” says Jill with her silence. Touché …

“I can directly attribute at least $18,000 of extra income directly related to his advice.”

Profit Convergence looks more like a zero figure business :: The opt-in is non functioning and the site is basically void of content or traffic. I’m not directly sold on Jay’s potato like charisma :: directly.

According to the site the Video Marketing Shark is ::

“This is an example of a WordPress page, you could edit this to put information about yourself or your site so readers know where you are coming from.”

Jay only has one blog post :: But if you do it right the first time … you don’t have to do another one ::

“Welcome to WordPress. This is your first post. Edit or delete it, then start blogging!”

Breathtaking in its simplicity!

Add the incomes from those three testiphonials together :: And you still qualify for welfare :: Maybe Not-Doctor Kilstein should add an eighth step and relaunch.