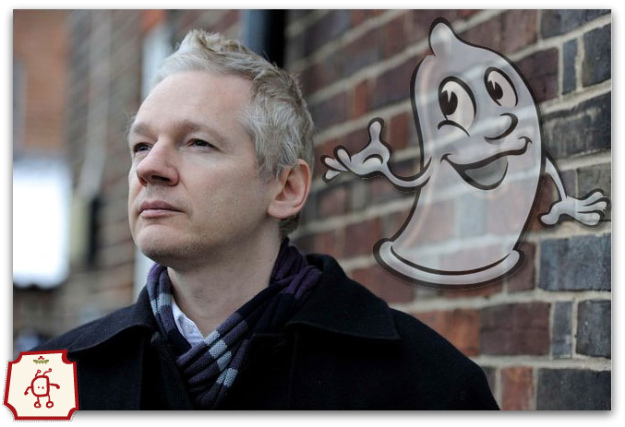 Have you heard about how my new hit movie is coming out just in time for the holidayz? It’s going to be quite gay {but not in a gay way!}. All of our favorite characters/bastards will be there :: even wannabe Jesus {Irwin F. Kern … not in a manger} :: so that should be fun and festive. Buy some popcorn :: a Survival Seed Bank :: and get ready for a Christmas Miracle …

Meanwhile :: Julian Assange is rubbing his naked manself onto things … so I thought I better tell you about it before he gets finished defeating America with all his crazy emailing skillz!

As you know :: the American puppet government in Sweden has been accusing Julian Assange of false rapes in order to prevent him from delivering world peace by New Year’s.

“Fake rape charges in service of a Swedish-American anti-free-speech alliance sounds quite unlikely!” :: says someone with the audacity to have half a fucking brain.

“That’s just what the CIA wants you to think!” :: says someone who likes cats too much.

“The honeytrap has been sprung … after what we’ve seen so far you can reasonably conclude this is part of a greater plan.”

“They called me the James Bond of journalism,” he recalled wryly. “It got me a lot of fans, and some of them ended up causing me a bit of trouble.”

Funny story :: police reports regarding Fake James Bond’s rape and molestation “bit of trouble” were RegularLeaked to the RegularPress {because Irony is the Queen of the Gods}. Many experts on assholes are saying the reports show a clear pattern of sustained flaming assholery consistent with mega-asshole syndrome.

“Miss A, told police that she had arranged Assange’s trip to Sweden, and let him stay in her flat because she was due to be away. She returned early, on Friday 13 August, after which the pair went for a meal and then returned to her flat.

Her account to police, which Assange disputes, stated that he began stroking her leg as they drank tea, before he pulled off her clothes and snapped a necklace that she was wearing. According to her statement she “tried to put on some articles of clothing as it was going too quickly and uncomfortably but Assange ripped them off again”. Miss A told police that she didn’t want to go any further “but that it was too late to stop Assange as she had gone along with it so far”, and so she allowed him to undress her.

According to the statement, Miss A then realised he was trying to have unprotected sex with her. She told police that she had tried a number of times to reach for a condom but Assange had stopped her by holding her arms and pinning her legs. The statement records Miss A describing how Assange then released her arms and agreed to use a condom, but she told the police that at some stage Assange had “done something” with the condom that resulted in it becoming ripped, and ejaculated without withdrawing.”

Another friend told police that during the evening Miss A told her she had had “the worst sex ever” with Assange: “Not only had it been the world’s worst screw, it had also been violent.”

That’s just what the CIA wanted her to think! “Make sure you’re terrible at it” :: they admonished as he dramatically exited a super top secret spy van that can morph into a rocketship … when necessary.

“Miss A says she spent Wednesday night on a mattress and then moved to a friend’s flat so she did not have to be near him. She told police that Assange had continued to make sexual advances to her every day after they slept together and on Wednesday 18 August had approached her, naked from the waist down, and rubbed himself against her.”

Meanwhile {while sleeping in Miss A’s bed} our hero is hunting for bad sex elsewhere :: enter Ms. W and The New York Times …

“The group dispersed after dinner, leaving Mr. Assange and Ms. W alone, the police report said. They decided to go to a movie, where, the report said, the couple began caressing, then moved to a back row, where they continued. Two days later, Ms. W and Mr. Assange met again and walked around the city’s old town together, according to the police report. It said they decided to go by train to Enkoping after Mr. Assange balked at staying in a Stockholm hotel. Ms. W then bought his rail ticket, for about $16, after Mr. Assange told her that he did not have any money, and that he feared he could be traced if he used a credit card.”

“The unredacted police report obtained by The Guardian says that after arriving at her apartment the two had sex using a condom. In the report, she described waking up to find him having sex with her again, without a condom. Later that morning, Ms. W told the police, Mr. Assange “ordered her to get some water and orange juice for him.” She said “she didn’t like being ordered around in her own home but got it anyway.”

The assertion that Mr. Assange initiated sex without a condom while Ms. W was asleep led the prosecutors to list rape among the allegations they wanted to explore with Mr. Assange, according to testimony in a London court. Swedish legal experts have said that the section of the Swedish penal code involved in the allegation refers to the third and least serious of three categories of rape, known as “less severe,” commonly invoked when men in relationships use threats or mild degrees of force to have sex with partners against their will. The maximum penalty for the offense is four years.”

So Ms. A & Ms. W :: both supporters of the non-raping part of the WikiLeaks agenda :: have some girl chat about their mutual awkward experiences with this narcissistic prick. Ms. W has never had sex without a condom before :: and she’s freaking out about it {good job Swedish education system!}.

“Harold has independently told the Guardian Miss A made a series of calls to him asking him to persuade Assange to take an STD test to reassure Miss W, and that Assange refused. Miss A then warned if Assange did not take a test, Miss W would go to the police. Assange had rejected this as blackmail, Harold told police.”

He’s too busy freeing speech to take an STD test and Misses A&W do go to the police. The police take these serious reports seriously.

Julian goes in for questioning :: it leaks to the press :: and Julian tweets …

“We were warned to expect ‘dirty tricks’. Now we have the first one.”

“Their identities have been made anonymous so even I have no idea who they are. We have been warned that the Pentagon, for example, is thinking of deploying dirty tricks to ruin us.”

… he impolitely declined. He’s too busy freeing speech to talk with “tabloid schmucks”.

“Bjorn Hurtig, Mr Assange’s Swedish lawyer, said he would lodge a formal complaint to the authorities and ask them to investigate how such sensitive police material leaked into the public domain.”

Did my head just explode?