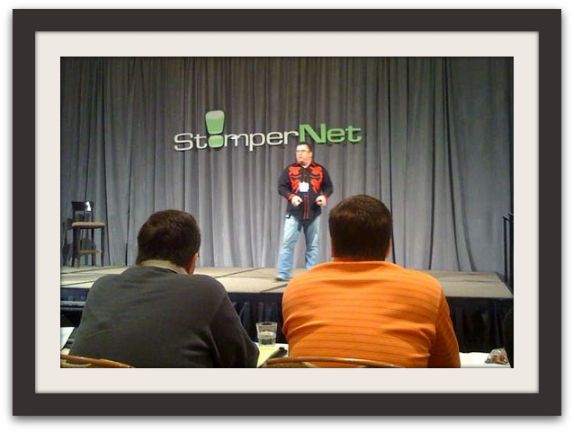 Perry {Evil Jowls} Belcher gave a speech at StomperNet Live this morning {pic via @kimballroundy}. Thankfully, Corey Creed took some excellent notes and posted them to his blog, The Jungle Map, shortly after Evil Jowls finished up.

Perry told an interesting anecdote about the power of social media influence {namely his own}:

“Perry tried reaching M. C. Hammer a couple times and he did not respond. So he told his followers and over 900 people told M.C. Hammer to call Perry. Five minutes later the manger for M.C. Hammer called and told him that M.C. is sleeping and will call him when he wakes up.”

Wow! Impressive! The Droid would love to see such a massive SWARM in action. Thankfully, Twitter is a database >> so traveling back in time is easy >> and a SWARM of 900 will leave a huge fucking dinosaur killing crater in Twitter Search :: Let’s look in the crater ::

WTF?? Is The Droid missing something? Or did Evil Jowls just tell a ridiculous {and easily falsifiable} lie to a room full of hundreds of people who PAID to hear him speak?