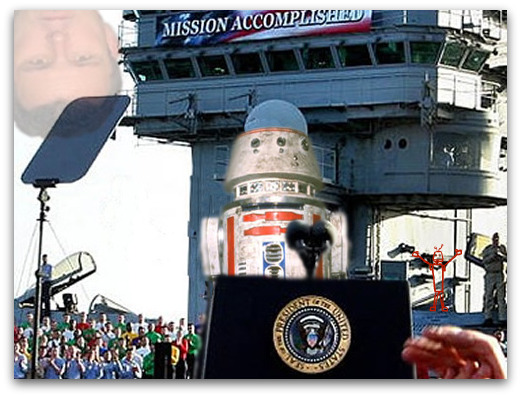 My fellow Americans : Major combat operations against Perry Belcher have ended. In the Battle of The Jowls, The Droid and his allies have prevailed. {Fuck yeah!}

A couple of weeks ago Perry magically appeared on this blog and left a few baffling comments. He implicated that he was going to give up “the biz” :: and he almost sounded not-stupid {link}. For some {obvious} reason :: I didn’t feel like taking the “man” at his word. D-bag surrenders come with strings attached :: Private conference was demanded … and accepted. Three weeks of girl talk followed … and terms have been reached.

So cry some salty tears and say goodbye to ::

Perry Says Goodbye {link} :: This post was part of the deal … and Perry delivered without class or fucking style … natch!

**BullShit **:: That has nothing to do with it. So pathetic … but I guess that’s what we’ve all come to expect from FatFace MaGee. It would have been disappointing if he didn’t keep lying and posturing to the bitter end.

This is not an anti- Perry Belcher blog {as so many lame brained hecklers have shouted} :: It’s an anti-scammer blog. Stop being a scammer :: stop finding yourself on this blog. I can’t say for sure whether or not Perry is actually finished with the scams :: but he’s done enough to convince me to hold my fire.

However :: if he makes an untriumphant return to the land of scam :: there will be no Third Second Chances.