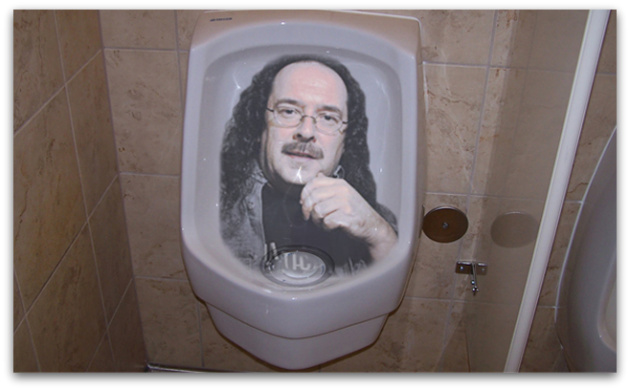 A whole fucking week without me! Oh lord how you must have suffered :: stuck contemplating the trivialities of your own banal existence :: void of humor and style :: lost like an ugly child at the State Fair … wandering around in pig/chicken shit … crying out for your momma and licking the residue of liquid cheese from inside the ocean bound plastic that served up your SuperNachoCornDog™. Whatever :: I’m back! Shut up and do everything I tell you.

Ed Magedson is the bloated sow responsible for the Rip-Off Report. He’s an advocate for the consumer he is. According to several Ed Magedson tribute sites {registered by Ed Magedson} …

“If you are new to RIpoffreport.com it is a consumer advocacy site where consumers who have been wronged can share their experience. Companies are encouraged to post a rebuttal and share their side, very similar to the Better Business Bureau, but our difference is that we do not remove the posts or make information go away if the business asks.”

“Ed Magedson created a great thing. He dedicated his life to it, and now gets threats every week. Why? Because he is not afraid to stand up to corruption, he fights for his rights and ours to freedom of speech.”

He fights for freedom! How nice …

Of course :: the “great thing” that he dedicated his life to is a total fucking sham … and he a sham of a man. But oh well :: you win some … you lose some.

The idea behind Rip-Off Report sounds simple and good. People can post complaints about companies who have screwed them over :: and those companies can reply … or go and suck it. Presumably :: credible sounding reports that are informational and get talked about and linked to will rank well in the search engines … exposing shenanigans. And false accusations about Vicious Garden Gnomes paying nude oiled midgets to tickle them until they pass out sink into Internet obscurity along with CraigsList ads for Jehovah’s Wittness teaching socials. If a company sees its soiled delicates displayed on page one of their Google results … they are going to do some laundry.

Or so the story goes … but the reality is much more festering.

Starting with the obvious … RipOff Report is a SUCK site. It’s put together like crap … it NEVER loads … it’s wicked ugly and lame … and it’s written like a pair of dirty socks circa 1999. And that’s the good news. The bad news is that Ed Magedson TAKES MONEY to help make your problems with Ed Magedson go away. He takes money!

Because he’s imbecilic he calls it the Corporate Advocacy Program. It works like this …

Yikes! That is ridiculously unethical … at best. At worst :: it’s an old school extortion racket whose sloppy cottage cheese loving SlobFather should be immediately arrested and jailed.

In 2007 a reporter from the Phoenix New Times wrote a detailed article about Magedson’s RipOff. It starts off in classic form with the d-bag being overly particular about pointless details … and …

Yes, he parks in the handicapped spot. And, no, he’s not disabled. He has a handicapped sticker, but it belonged to his late father. “I’m not perfect,” he says.

He intentionally schedules his meeting with a newspaper reporter in a place where she can watch him park in the handicap spot? Smooth … like the grossly hairy chest of a balding mid-fifties dirtbag.

Talking about his work, he tends to slip into the third person, as if he’s dreaming aloud about how his story should be told.

“Ed knows it’s sweeps week when he gets calls from reporters around the country looking for scams,” he says, then repeats it later for good measure. Or, “Ed was formulating what he wanted to do . . .”

“If it was just a bulletin board where he’s posting complaints without editing or embellishing them, then he’d have a defense,” says Christopher Sharp, a Florida-based attorney who is suing Magedson’s company on behalf of a Colorado company that provides training courses in finance, real estate, and the stock market. (Sharp’s claim recently survived Magedson’s attempt at dismissal thanks to an appeals-court decision based on the Communications Decency Act.)

“But it’s pretty clear that he writes posts himself,” Sharp says, a point Magedson denies. “And if you ask him to take them down, he says, ‘Just join my corporate advocacy program.’

“I have to tip my hat to him,” Sharp says. “He knows how to run an extortion scheme.”

The borderline between unethical and criminal runs through content creation. If Magedson {or one of his dirty little minions} … has created ANY of the defamatory content for which third parties have paid him to mitigate … he’s in big fat trouble.

Section 230 of the now erroneously named Communications Decency Act protects website owners from liability for the things that psycho trolls say in the comments. It helps keep the Internet nice and crazy :: like real life. That protection would seem to extend to blatant profiteering from the defamation of others {an unfortunate result}. Many lawsuits filed against RipOff Report’s mother company Xcentric have been tossed because of CDA protection. More recent cases {as outlined by Sarah Bird} have tended to emphasize the RICO/extortion angle where the CDA protection doesn’t come into play.

Whether or not Mr. Ed’s tawdry behavior rises to the level of criminality remains an open question. But the question of his d-bageyness has long been well and truly answered. Ed Magedson thinks of himself as an important person :: as an outsider :: and as an advocate for the little guy. But in reality he is just a poser :: a sad baboon :: and a remnant of the Internet’s early growing pains that must be routed around if justice is to prevail.

Many critics of RipOff Report focus on the harm that the false reports can cause to legit businesses. This is no doubt a huge problem :: but the scummy shadiness of Magedson’s “corporate advocacy” program also serves {perversely} to prop up scammers and assholes who more than deserved to be called out for their shenanigans. To the extent that the site has any real value :: that value is created by the users who generate genuine complaints and reports. But if the scammer is willing to pay :: fat fucking turd ball Ed Magedson is ready to play. Fuck the user :: fuck the consumer :: fuck the truth. Ed’s got to get his … that’s what matters to Ed.

Case in point … long time not-friend {and first official target} of The Droid Matt Bacak had a problem with the RipOff Report. There are eleven total reports created for BallSack :: including this one which ranks on the first page of Google. Most of the complaints {when they actually load} tell the same story.

Yep yep! Sounds like Matt Bacak to me. It’s called being a scammer … and he is one. But BallSack must have paid up :: because now all eleven of the reports start with the glowing results of a “Rip-off Report Investigation” which includes the following statements of lunacy …

Positive Rating and Recognition has been given to Matt Bacak for his Commitment to Excellence in customer service.

For instance, he learned it was necessary to remove certain employees because of their inability to follow new policies. “I hate having to fire people, but the fact is my customers are my #1 business priority,” Matt told Rip-off Report.

Well good news you sweaty beast :: I just started talking about you :: and I have a very long attention span :: so I guess you’ve got nothing to worry about.