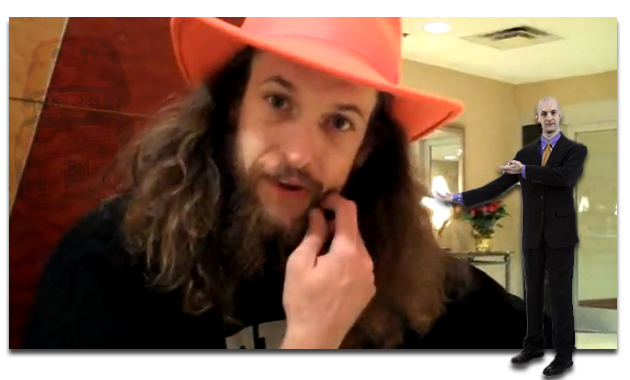 Run Tellman Run :: at the mouth :: constantly run at the fucking mouth. Tellman Knudson has been unable to stop running his yapper for YEARS. He could run his ignorant mouth incessantly for 3 months :: without ever taking a breath … or saying a goddamn thing. It’s a gift really :: like being born with a tail.

Tellman lives in Brattleboro Vermont :: where he grows out the hair on his face and the sides of his head to try and forget about how it stopped growing on the top. Recently his Run Tellman Run project received some coverage in the local newspaper. All press is good press … oh except that Kevin O’Connor of the Rutland Herald {we are vermont!} mercilessly pwns balding pimp of filth Tellman Knudson.

“But after spending four months and $500,000 in road expenses to reach West Virginia, Knudson has returned to his Vermont home to “regroup.” He’s now facing questions about why his charity says it’s an officially registered nonprofit even though its name doesn’t appear on the Internal Revenue Service’s list of recognized organizations.

The 33-year-old Brattleboro resident and self-described millionaire Internet marketer made big promises Sept. 9 when he took off his shoes and began to trot westward toward a finish line more than 3,000 miles away.

“Look for me on the cover of Guinness Book 2011,” Knudson wrote on his fundraising Website

At the time, the Vermont attorney general’s Consumer Assistance Program had received complaints about Knudson’s marketing business, and the word “scam” was showing up as a popular search when you Googled his name. Nevertheless, most reporters simply have parroted the runner’s press releases in print or on air.

Off camera, however, Knudson wasn’t running his promised 26 miles a day. He didn’t hit that goal until Oct. 25, his Web site reports, then dropped to seven miles on Oct. 26, three miles on Oct. 27 and no miles on Oct. 28, when he took one of several multiday breaks because of problematic weather or persistent foot injuries.”

Here is one of those press releases :: Tellman Knudson Meets President Clinton - No Shoes Necessary. Just a small taste of the genius …

“If you knew Knudson’s backstory, the idea of barefooting across a continent to raise such a vast sum of money wouldn’t seem so incredible. He was born with femoral antiversion, a bone deformity that left his feet pointing 45 degrees inward. He could barely walk without stumbling and doctors said they would have to purposely break his legs and conform them in casts for six months.”

Yep! It’s all making sense for me now.

At the beginning of the promotion :: all of the proceeds from Run BaldMan Run were said to be headed for Richard Branson’s charity Virgin Unite.

“Virgin Unite reaped about $250,000 in donations credited to Knudson, www.virginunite.com reports. According to the runner, most of that money came from two Internet businesses, geniusnetwork.com (run by Piranha Marketing Inc. of Tempe, Ariz.) and Maverick Business Adventures (a Web company with an “invitation-only membership exclusively for successful entrepreneurs, CEOs and business owners who want to live life to the fullest”).”

Well isn’t that interesting :: so the “master”“mind” groups of Yanik Silver and Joe Polish put up the initial money? It gets posted to Virgin Unite’s website where donations can be tracked. How about a video with Sir Richard? Sure thing …

That’s all very legitimizing. But then when the bald running and the fund raising actually start :: the donation button is switched over to Fake Forrest’s own charity Tellman.org. How convenient. Funny story …

But neither IRS officials nor the www.irs.gov “Search for Charities” link reports any record of Tellman.org as a registered charity.

Knudson, in a phone interview, said that’s because his organization took over the nonprofit status of The Children’s Horizon Foundation of Texas, started by a businessman named Richard Sapio.

Knudson said he would provide a copy of the IRS transfer papers. Instead, this newspaper received a call the next day from his lawyer, Mary Parent, an associate with Downs Rachlin Martin in St. Johnsbury …

“It’s totally transparent, and everything was done above board and in compliance with the law,” Parent said. “Tellman.org is the same organization as The Children’s Horizon Foundation. The Children’s Horizon Foundation has simply changed its name and state of organization. There’s no requirement for the IRS to sign off on this - as long as the purpose is aligned, that’s fine.”

The IRS disagrees. It confirms the tax-exempt status of The Children’s Horizon Foundation, with headquarters listed in Dallas. But while it wouldn’t specifically address Tellman.org because of privacy and disclosure laws, it said organizations couldn’t decide for themselves how to transfer official nonprofit approval.

No they certainly can not. And a fun fact about Richard Sapio …

According to U.S. Department of Justice records, a Richard A. Sapio of Dallas was accused in 2003 of securities-related fraud and in 2004 of conspiracy to commit securities fraud, wire fraud and mail fraud - although the government dropped its pursuit of the charges in 2008.

Sounds great … he should sell an e-book about it.

So how successful has Tellman been raising money for his own dubious charity?

Asked for the run’s fundraising total, Knudson replied: “I don’t know the number off the top of my head. I am an entrepreneur. I do not keep track of my books. I do things for the world.”

Ha ha! Classic d-bag stuff right there … because in the unicorn version of entrepreneurship :: Peter Fucking Pan keeps the books while the biz owner dances around in the moonlight with fairies sipping absinthe and snorting adderall.

So according to his own reports :: Fake Forrest Gimp has spent $500,000 on self aggrandizing self promotion :: and given just $10,000 to kids in need :: all the while using the charity as an angle to try and sell his garbage to the unwitting.

Read the article for much other goodness :: but let’s go out on a low note. Tellman :: clearly a “man” with charity in his heart …

Asked if he regretted spending $500,000 on road expenses rather than donating it to homeless teens, he replied: “A half a million won’t make a difference - it won’t save a whole lot of dying kids.”