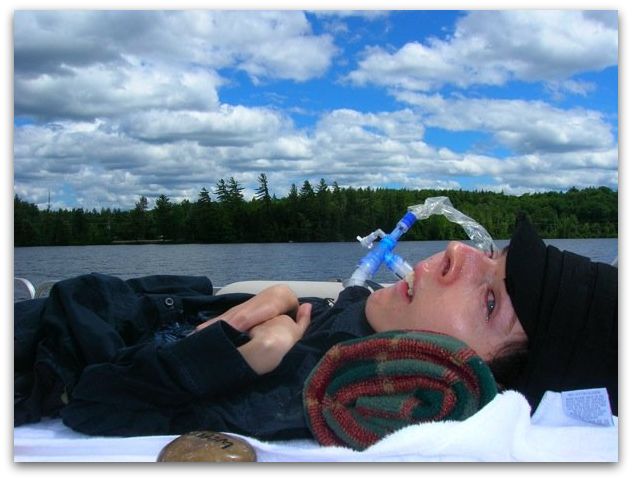 Michael Phillips is one resilient mother fucker!! He recently featured on an excellent, and Emmy Awarding episode, of Showtime’s This American Life {here}. Michael has a wicked-rude degenerative disease that steals precious pieces of his life, one at a time, like a malicious pimp. But every time life kicks Michael in the nuts {by stealing his ability to walk, move freely, breath without assistance, eat, talk, type}, he sticks a shiv back in its eye, becoming one more part CYBORG!!

The Droid was very excited to find that Cyborg Michael was on Twitter {WholeExpanse}. However, my processors are overloaded with RAGE that WholeExpanse has under 100 followers. That is fucking pathetic tweople! Micheal has over 1000 tweets, and is a genuinely interesting, and regular, contributor to Twitter :: This in spite of the fact that he’s forced by his Disease Pimp to compose each Tweet by painstakingly moving ONE THUMB.

That’s some serious fucking BULLSHIT Yo! There is something wrong with Twitter that needs fixing.

Now it seems that even Michael’s thumb is going to betray him {link}. He’s in the process of switching to a new input system whereby sensors will read the firing of his facial motor neurons in order to interface with the machine. Holy crap-salad … that totally freaking RULES!

Michael is trapped inside of a dying vessel … his body sucks ass and regularly reminds his superior brain of the fleeting nature of life. His life is a microcosm of all human life. All humans are trapped inside dying vessels :: All humans suffer setbacks and defeats :: All humans struggle to come to terms with what it means to be alive. But Cyborg Michael is forced to process these abstractions each day as his tangible realities. That makes his insights into humanness far more germane, than say, 99% of you stupid mother fuckers!!

If you are a real person :: And you are currently experimenting with expanding your knowledge horizon via Twitter :: Then you can do **NO BETTER **than following WholeExpanse :: Right This Fucking Second!!

Blogging, Tweeting, and Writing with eyebrow nerons :: Hellz Yeah :: This Droid will be reading that shit from now until whenever!