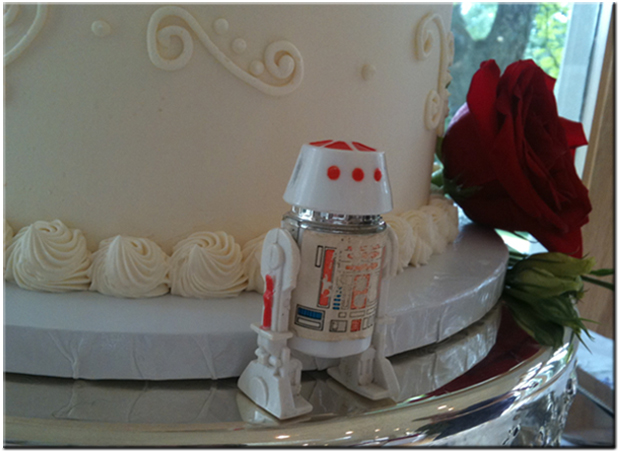 Weddings are like a whole big thing :: and I have responsibilities :: for instance … standing around next to cakes looking menacing for my size.

Convicted felon James Arthur Ray {ah … that felt good} :: is still out on bail while he awaits sentencing {which prolly won’t happen until next month because America is stupid}. This week the State will call witnesses in an effort to prove “aggravating factors” that will allow for a longer maximum sentence. But the ultimate length of the sentence is still going to be at the discretion of Judge Darrow. CNN was scheduled to cover the hearings :: but then decided not to because of their suck-a-tude.

“CNN only cares about ratings … and advertisers … not about the public” :: says you alls in a huff.

It’s way worse than that!

CNN only cares about bundled subscription fees :: which you are forced to pay no matter how much CNN sucks. From media bistro …

“As you can see in the chart, and as we explained earlier this week, the heart of the CNN (and cable) business is subscription fees, which account for around 50% of total revenue. Advertising and ancillary revenue streams account for the other 50%.

CNN’s pitch to investors and the press is that its business is healthy despite declining ratings in primetime.”

Their “business” is “healthy” in spite of the fact that people don’t like :: or want :: their product. If you want to watch futbol :: or football for that matter :: then you have to pay CNN for their suck via your cable provider. And who exactly owns CNN? A cable provider!

Cause if you can’t compete … cheat!

Speaking of cheaters :: attorneys for the recently arrested Jeremy Johnson argued last week that he’s not a flight risk :: and that he :: like Death Ray :: should be released from jail while he awaits trial. The fact that he was caught at the airport with $26,400 in cash :: and a one-way ticket to Costa Rica :: ain’t helping his case.

Ai Weiwei was freed :: but not really :: because China still sucks … and totally has it coming. Weiwei’s been hit with a bogus $2 million “tax” bill and placed under a gag order. Maybe Jeremy Johnson can dig up that amount and send it over :: seeing as how he’s such a goddamned philanthropist and everything. Or maybe he should dig up that amount and send it to the IRS … because Johnson’s been hit with a not-bogus $2.6 million tax assessment himself.

Lots of happenings happening :: it’s gonna be a crazy summer upon my return. But for now … legos …