“The Law” of Attraction has failed James Arthur Ray :: he’s been convicted on three counts of negligent homicide.

But The Law of Attraction has also failed The Salty Droid :: whose laser focused thoughts :: feelings :: and actions … had the jury returning with a bucket full of tar and telling Death Ray to strip.

But life’s not about what you intend :: or want :: or need … it’s about what happens to you. Most of what happens to you will be out of your control. Like earthquakes :: and floods :: and mother-in-laws :: and asshole husbands :: and juries who can’t convict on recklessness because they weren’t allowed to hear the evidence.

Not guilty was basically out of the question … because of … well … everything. So the jury was deciding between reckless and negligent homicide.

Recklessness means he knew he was risking lives.

Negligence means that he should have known he was risking lives.

The most relevant evidence regarding this “state of mind” distinction :: as Ms. Polk and Mr. Hughes argued repeatedly … was that Mr. Ray was intentionally ratcheting up the heat in order to push people out of their minds. Some years weren’t bad enough for him :: and he complained … and rectified in the following years.

People :: even Megan … pushed back. “James these people are your responsibility …” :: which testimony has Megan Fredrickson saying in the lodge :: was not the beginning of that dialogue. The Hamilton’s pushed back too :: not so back as to stop being sell-outs … but they pushed back.

Yet Judge Darrow steadfastly refused to allow this sort of evidence for fear of the prejudicial effect that such hideous past actions would have on the jurors. The fact that ALL his past actions were :: in effect :: “bad actions” :: meant that any evidence other than that of Oct 8th was highly contested. The purity of his evil was actually a tactical legal advantage. The same is true for one of the defense’s primary arguments :: that a core temperature reading above 104 is required for a heat stroke diagnosis. Kirby and James were already dead because of Death Ray’s stalling :: and because of prior year shout downs for people with the audacity to call 911.

Liz was just laying out there :: in the mud and the desert night … half a corpse. Her “friend” and “mentor” of 10 years was just a few months away from arguing that he was innocent of killing her because her half dead body had already cooled while he was having a sandwich.

It’s why justice has to be a group effort :: and a war with many fronts and battles. The robes :: hardwood :: and old-fashioned rules are never enough … once you’ve looked close enough.

In spite of the obstacles :: I thought Ms. Polk proved recklessness beyond a reasonable doubt. The jury thought otherwise. They didn’t know what Ray knew :: but they did know what he did … and they convicted him for it.

I know I speak for many when I say I’m a little bit disappointed that the more aggressive charges didn’t stick :: and a lot bit relieved that something stuck. Turns out :: sometimes there ARE consequences for frauding people to death.

Idiot Death Ray looked relieved as well. For a brief moment after the not-guilty on recklessness verdict was read :: he appeared to think he was Audi 5000. His normally abnormally emotionless face suddenly blurted out :: narcissist wins the lottery type situation :: here’s the money shot … 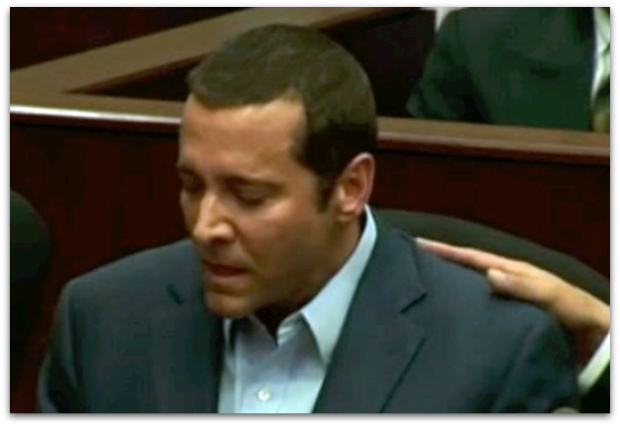 The video above is the verdict :: and then the series of micro expressions that made up Death Ray’s moment of confusion.

Next week the State will try and show that this was an “aggravated” offense :: the rules won’t be the same … but there will still be rules. Accomplices :: greed :: heinousness :: victim suffering … and other super peppy stuff like that will be discussed.

And then James Arthur Ray will go to jail.

It’s not over :: but I guess we’re done waiting to exhale …