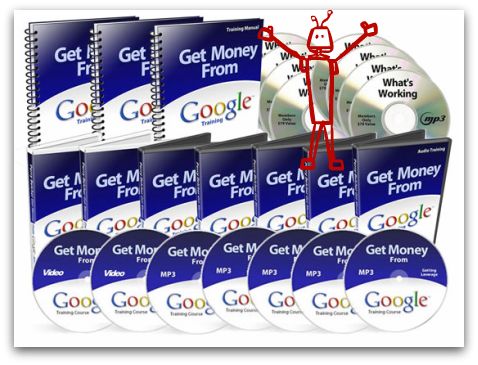 The Droid recently threatened to sue Evil Jowls Perry Belcher {and his partner in Scam&Eggs Ryan Diess} for the hostile registration of my distinctive, and to use the legal term of art, super-duper-creative trademark {link}. That plan progresses nicely :: Believe It!!

One kindly commenter on that diatribe posted a FULL LIST of Ryan and Perry’s current scam sites {much to their dimwitted dismay}. It contains some pretty hilarious shit that will be appearing on this site in the coming weeks/months/infinities. The same commenter also made this inspired suggestion ::

“It’s interesting how his current big money maker “Get Money from Google” (dotcom) has evaded Google’s legal department radar for trademark infringement. Maybe someone should alert them to that particular Deiss-owned domain…bleep bloop.”

Oh My Effing Goodness {OMEG} :: Isn’t that just a delicious idea?!? Google aggressively defends its own trademark rights :: For obvious reasons :: It has built one the most valuable brand names EVER created. I’d be willing to bet my spare processing capacity that if Google knew what Evil Jowls was up to :: They would be none too fucking pleased. Perhaps The Droid can help ::

Dear Google Letter –> {Google Doc of the Letter} <– This letter has been sent via email and SnailMail to Rose Hagan, Senior Trademark Counsel for Google Inc. Here’s an example of a prior SmackDown issued by Ms. Hagen

The Droid understands why these two knuckleheads would think they could get away with violating my trademark rights … I’m just some idiot nobody. Violating the rights of the Big G however :: Criminally Stupid!!