Before The Droid’s top secret fabrication was completed in Jan 2009 {first report}, the term “Salty Droid” was not known to the Intertubes. The domain name wasn’t registered, the Gmail was available, the Twitter, MySpace, YouTube, etc … all available :: a Google Search for “Salty Droid” in Dec 2008 returned ZERO results. If this surprises you … U R Stupid! It’s an unlikely word pairing … so unlikely … that I’m willing to guarantee it’s never been used on the Internet in any parallel universes either {go ahead .. prove me wrong}.

I grabbed all the digital real estate I wanted in 2 hours of iMac clicking {Total Cost = $0}… and started writing. BRINGING IT to fuck-tards without mercy :: And in a strange new way that they can’t understand :: Isn’t that right you poor, confused, fuck-tards??

I left the Domain temporarily unregistered with the thought that cybersquatting on such a distinctive name would be like intentionally shoving your leg into an Intellectual Property bear trap :: No one could be that stupid.

If you aren’t familiar with cybersquatters, they buy up domain names based on other peoples ideas, or popularity, and then charge jacked up prices to sell them back {or worse}. If you aren’t familiar with bear traps, they are metal clamps that bite into a bear’s leg … often forcing the bear to die attempting to chew off its own leg. {NOT COOL when it happens to a bear :: SUPER COOL when it happens to a scammer … metaphorically}.

OMFG! You’re kidding me … How fun! Who is the lucky winner of One FULL Year of merciless teasing and torment? Query :: WhoIs :: {surprise!} 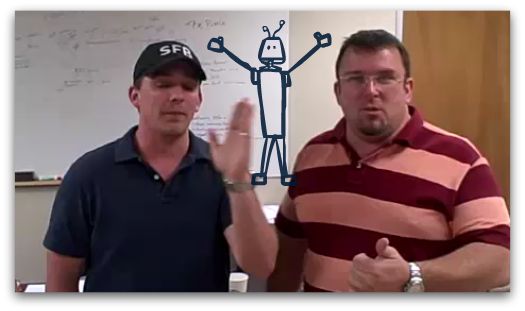 Well now … isn’t that interesting … it’s none other than Evil Jowls Perry Belcher’s front man and “business partner” Ryan Deiss. Or to put it another way :: HOLY FUCK!!

Guess what you Epic Fucking IDIOTS? You just gave The Salty Droid a cause of action against you in U.S. Federal Court :: with statutory damages of up to $100,000. 15 U.S.C. § 1125(d). Oh Snap! I hope your Continuity Blueprint is selling like Fucking HotCakes today …

All I need to do is prove that you’ve registered the name in “bad faith.” I don’t think that will be much of a problem ::

But you have nothing to worry about … right Perry & Ryan? The Droid isn’t a threat to you. He’s just some spurned Internet Marketer with no money, no life, and no prospects. Or maybe he’s some prepubescent piss-ant with a penchant for profanity. Either way, The Droid is in no position to file a lawsuit. But wouldn’t it just be fucking hilarious if I wasn’t lying in my Bio? What if I actually had attended one of the best {totally the best :: fuck Boalt} Intellectual Property law schools in America {here}? In that unlikely scenario … I wonder what kind of legal briefs I’d be most comfortable drafting?? Yep!

Any clue how much it will cost to defend against a mother fucker like me?? Ha! You have no idea! Law … much like Internet Marketing … is MOSTLY a total fucking rip off.

Congratulations to ME! Your juvenile {and 1995ish} attempt to stifle me is EASILY the best thing that’s ever happened to me.

See you in court!