An anonymous citizen sent me a video :: thank you citizen. I fixed it up a bit :: made it shorter :: and added the d-bag theme song … but it was otherwise not my handy work.

Irwin F. Kern speaking at he and Ed Dale’s “Underachiever” seminar in the loathsome and marsupial bespeckled land of Australia :: circa 2004.

Irwin explains how he got started in Internet Marketing. It’s an inspirational story … like the virgin birth. Except replace the virgin with a dead hooker … and replace the baby Jesus with the rights to reprint a Yanik Silver e-book.

According to Irwin :: Frank hadn’t made a penny online before he put up the Instant Internet Empires site in 2001. The archive of the site can be found here {sometimes}. In spite of Irwin’s complete lack of success :: Frank starts the sales letter off with a six figure income claim {and a hideous grammar error!} … 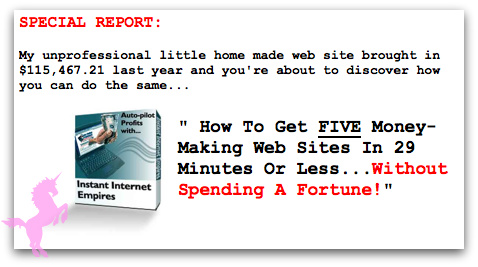 … and ends with an FTC action.

“Instant Internet Empires” touted the money-making potential of five pre-packaged Internet businesses, promising that buyers could make more than $115,000 a year using the product. According to the FTC, for their $47.77 investment, consumers received the right to reproduce the defendants’ Web site and the right to try to resell its contents to other consumers. The FTC alleged that to achieve the promised $115,000 in earnings, consumers each would have to sell the product to 2,400 additional consumers, who would each need to sell to 2,400 additional consumers to achieve the same earnings, and so on. According to the FTC, by the third generation of the scheme, participants would need to make a total of 13,829,760,000 sales, more than twice the earth’s population, for each of them to achieve the advertised earnings.