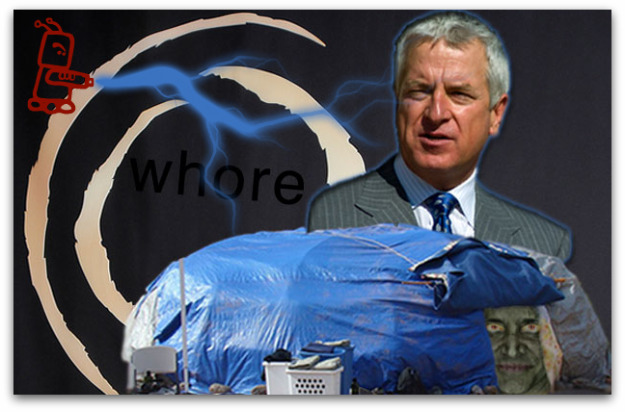 “They” say behind every good criminal you’ll find a great spin-control PR man :: or maybe they don’t say that :: it actually sounds pretty stupid. Who can afford a PR man?

“Now Mrs. Johnson, I know the police are saying that Tyrone was driving under the influence again. But the police say a lot of things. Remember Rodney King? And did you see that movie Serpico? The police are capable of some terrible sins. And what about the grassy knoll? Cuba? Ayn Rand? Know what I mean?

Anyway, I just think the Founding Fathers would not want us passing judgment on Tyrone until all the facts are in … it would be un-American. Incidentally, there is no way that was his blunt. And also … he needs a shirt.”

James Arthur Ray recently had a PR man makeover :: Oprah didn’t do show about it :: maybe it was on E! :: but I learned about it from a Rat.

Howard Bragman :: is out on his ass … along with his “two dogs and a parrot.”

But he did have time to smear some of his stinking feces on the story before he left :: Like pointing out that many of the participants at the Spiritual Warrior event had “amazing experiences.” Said one participant {recently starved in the desert for 36 hours and then stuffed into a oxygen free death trap} :: “The JRI team completely over-delivered on this one. I came here to work on improving my mindset so that bad things would stop happening to me … but I ended up watching people die. I’m sure I’ll be reliving the memories from this experience for my entire lifetime. Like I said, it was amazing.”

“I think they are trying to tar my client,” Bragman is quoted in the Republic as saying. “Somebody must be running for reelection in Yavapai County.”

… said Bragman from Los Angles as he adjusted his assless chaps and giant fake mustache.

I. ALL PRESS IS NOT GOOD PRESS.

Hellz Yeah! I tell bitches that shit all the time. Like just as a for instance :: if you find your name on this blog {Howard Bragman} :: then you should pause for a moment and reflect on your recent behaviors.

Nope! :: REALITY is reality :: Perception is a fickle slut that drinks too much.

Okay bored :: Fuck you Howard Bragman :: Please go drown yourself in the run-off of a nude ice sculpture of Leonardo DiCaprio. The shallower the pool :: the more your death will mirror your life.

The new Propaganda Minister is Mark Fabiani :: and he’s not Red Army cheap. Mr. Fabiani was formerly a Democratic Party insider. He held positions in the Clinton White House and on the Gore presidential campaign {two of the greatest PR success stories of all time}.

The big media companies hired Fabiani to help the them spin PR during the writers strike :: hopefully he was able to keep the near powerless writers from “tarring his client in the media.”

Most recently Mr. Fabiani has been plying his mouth magic for the San Diego Chargers :: spinning the idea of a new stadium that corporate FatCats would love taxpayers to subsidize :: and being a dick about it.

Fabiani has tastefully dubbed himself the “Master of Disaster” :: Because he’s a PR douche and that’s just the sort of thing that a PR douche thinks is useful. He’s going to collect some huge checks :: and in return he is going to help spin the media in a way that will be favorable to the interests of James Ray International.

The bullshit shenanigans of James Death Ray has created a long line of seriously aggrieved victims. JRI’s ability to generate revenue will evaporate completely if there is a homicide trial. Mark Fabiani :: beltway insider :: is being paid with blood money. Money that should go to compensate folks for their uncompensatable losses is instead going to pay Grandpa Fabiani to twist the truth into something less fucking horrible than the truth.

Hey Mark :: remember during the Clinton scandals when CNN started taking you to task personally :: hunting down your demons :: laughing at your inadequacies :: and publicly decrying your unforgivable hypocrisy? NO?

Well welcome to the New World bitch :: I’d recommend getting yourself a website :: and maybe a good PR man … you’re going to need it.