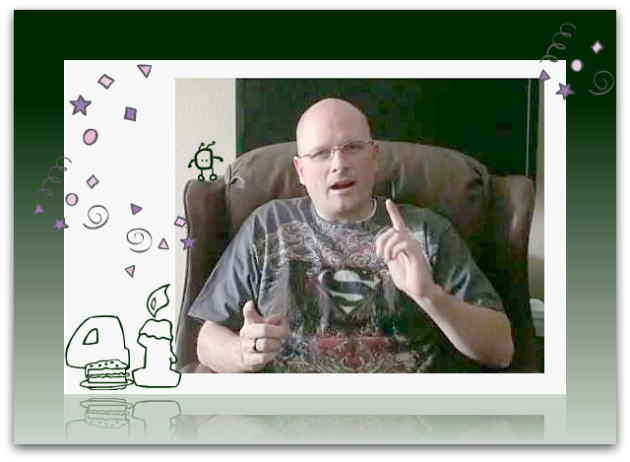 I’ll give you a moment to collect yourself … … … okay?

Allegedly :: according to Matt’s mother :: he has one of these birthdays each year. He takes them all quite seriously because :: while he’s continued to age :: he’s failed to mature. According to Matt …

“For my 30th birthday I sold my software company and walked away a millionaire.”

Awesome. Happy Birthday. I give a shit.

“For my 40th I wanted to do something else… something meaningful and big. And something I’ve never done before.”

Committing to making a positive difference in your community even if it comes at great personal expense?

Tutoring underprivileged kids who are falling behind in math?

“So I’m creating a braintrust and coaching program where I will pull back the curtain on the wicked-cool methods I use… and I give you the tools and knowledge to do it yourself.”

For his forty-first birthday Matt Harward went and got himself on TV for not following through on the meaningful meaningfulness of his fortieth birthday promises.

Phoenix’s 3 on Your Side reports that …

But all the customers 3 On Your Side heard from say Harward’s promises fell short.”

Yes he “fell short” :: very very short. Like … he didn’t deliver. Not his delivery sucked :: not he over promised :: not his unicorns were fake :: he just flat failed to deliver … ANYTHING!

“They say Harward stopped posting new learning material, that he wasn’t participating in live online forums, and that he eventually just disappeared.

“Nobody heard anything from him. He didn’t participate in the forums. He didn’t respond to emails, he didn’t return phone calls,” Larry said.”

Matt calls it “cave mode” :: because he is a Neanderthal :: but you might also call it fraud. In fact :: I just did … FRAUD!

“I am personally $990 out of pocket (I got suckered into his Birthday special) whilst others delayed a short while and stomped up the full price of $1482 (instalments) for what turned out to be the most shambolic, amateurish bag of poo ever to misrepresent itself on the internet! I should have known better and feel quite the fool (now) as do many many more members who in good faith handed over their cash.”

There is nothing worse than a shambolic bag of poo.

From a Ripoff Report by Vitaly …

“At the time I’m writing this, it’s August of 2010,** 9 months have gone by, there’s still NO TRAINING.** He did send out some software last week, which is buggy and doesn’t work. No webinars, no marketing training,** NOTHING.**

There’s are numerous threads on the forum, with people demanding refund, threatening to take legal action, and Matt Harward doesn’t even acknowledge them.”

There were numerous threads on the forum … until Matt Harward took the forums down completely in a limp dick attempt to slow the mutiny. It’s strange because in his sales materials he said …

“The community and forums will stay open indefinitely… for as long as they provide value (they are already very active after only being open for a day). You will always have access to the forums and community at no additional charge. I think that will be one of the biggest values of the course… the forums and community. I already know a handful of the people who will be in the group and we’ll have some heavy hitters.”

The Droid spoke with Chris Morris :: one of the “shambolic bag of poo” members interviewed for the Channel 3 story. Chris says he approached Matt Harward about getting refunds for himself and the rest of the group. Matt tried to get Chris to sign a bizarre non-disclosure agreement in return for his refund. I saw a copy of the agreement {which Chris refused to sign} and it appeared to be a lawyer’s unfinished work product. The forms weren’t filled in with the specifics :: and the cover letter addressed Matt rather than Chris. Bizarre.

Matt also wanted Chris to return to the forums and become a covert cheerleader for Team Matt. Chris declined that terrific opportunity in favor of telling the whole story to the fancy TV news lady.

The thing you have to understand is that Matt was surprised by how many people signed up for the program. He just couldn’t handle all the success. That’s something you might be able to understand if you were a huge fucking happy birthday millionaire like Matt Harward. Releasing a webinar for a couple of dozen people is one thing :: but releasing a webinar for 300 people is … pretty much the exact same thing.

“I also want to make it clear, I’ve learned a lot from this. I won’t ever do this this way again …”

That’s cool. He won’t ever steal the cash equivalent of a Lamborghini again … just this once. Just this once he’ll collect $300,000 in return for NOTHING … and then walk off into the fucking sunset. In the future he won’t do it this way.

“But, Harward tells 3 On Your Side he will not refund anyone else.

He says his window for a refund has long passed.”

His refund window closed before his delivery window opened? That seems wrong to me … but maybe I’m just confused about the rules regarding windows.

Matt’s victims are outraged :: they are organized :: and they’ve sent me an invitation to their party {many invitations in fact}. I don’t like to brag or anything … but I’ve got some ideas!