Perry Belcher didn’t want to come to Lollapalooza with me. He’s more of a cassette tape of Hank Williams Jr. kind of D-Bag :: And festivals are tough on short, squat, stupid little men. I convinced him only by explaining how easy it was to pickpocket drunks in a crowd. “Irresistible!” chortles Chubby Neck, “Irresistible!”

Evil Jowls complained about the rain during Bon Iver :: I was forced to smack him. Rain is perfect for that eerily angelic falsetto … and it was amazing. Last year it was 98 on Friday :: Is that what you want turd? I didn’t think so.

Perry and I waited more than an hour for a sweet spot for The Decemberists :: They played Hazards of Love start to finish :: I thought it was fucking awesome, but Perry was writhing around on the ground in pain after having called the hippie chick next to us “sweetheart” :: Turns out … she wasn’t.

For a moment I thought my Evil BFF was going to love Andrew Bird :: At the beginning of the set Perry started jumping up and down … clapping like a mentally deficient seal :: “I can whistle too, I can whistle too,” he twanged at maximum voice. But then Andrew sang ::

In the salsify mains of what was thought but unsaid

all the calcified arhythmitists were doing the math

it would take a calculated blow to the head

to light the eyes of all the harmless sociopaths.

:: and Perry started to sob and mumble something about how his Mom hadn’t noticed that he was dyslexic until it was too late.

I hope Evil Jowls has more fun tomorrow or he’s going to stop going to shows with me. I’ll bring a bag of Twinkies :: A motorcycle coloring book :: And an iPod shuffle loaded with Travis Tritt :: Just to be on the safe side.

I couldn’t get Perry to shut up about my “broke ass house” today :: It was a real annoyance :: I’m starting to regret letting him live in my pocket. What the fuck is wrong with my house? We are walking distance to this god damn festival are we not? I know it’s no Tennessee Suburban McMansion {purchased with blood money} … but it’s pretty kick ass.

Perry didn’t understand why all the wild Welsh in Los Campesinos! had changed their last names to Campesinos! :: I don’t understand either :: But I told Evil Jowls it was an anti-werewolf safety precaution :: He seemed convinced. They gave a shout out to Elliot Smith :: Who would have been 40 this week :: And then they rocked way more than Heatmiser ever did {I love you Elliot!}.

I’ll bet you didn’t know that Perry Belcher was a huge fan of Animal Collective :: No wait :: That was someone else. Mr. ThickNeckerson had never heard of them :: The only Pitchfork he knows about is the one that Satan keeps jabbing in his ass. 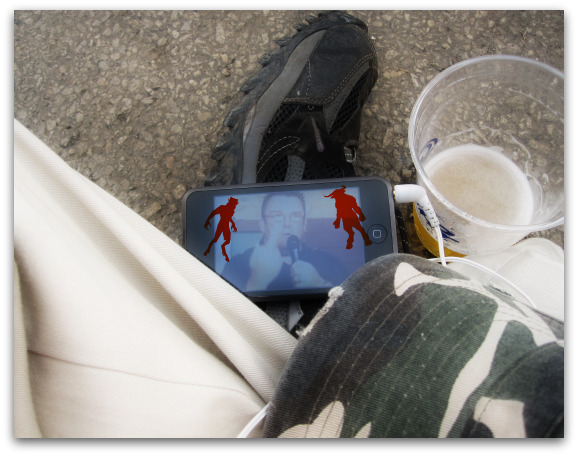 **Perry spent **almost all of Sunday in my pocket :: Right next to my incredibly sweaty balls. He seemed to prefer it :: The rock ethos makes him nauseous. Rock is about telling the establishment to suck it :: But Evil Jowls feeds on the herd like conformity to establishment norms. Norms which demand politeness at all costs … and teach us not to question … and to believe that people who say “I’m not lying” must indeed be truthful. The resonance frequencies ringing from rock send a very clear message to every organic molecule within range: FUCK THAT!

The Sun refused to bugger off during Ra Ra Riot :: and it was painful :: very painful. If forced to estimate :: I’d say 40 people were killed … but maybe it was closer to 0. They were worth it! One word :: Cello. No offense to Yo Yo Ma :: But it’s an instrument that rarely makes my PlayList.

Vampire Weekend started getting loads of shit from music snobs once EVERYONE on Earth declared their love for their self titled debut. That’s BullShit Yo! That album is a fucking masterpiece :: that the fools love it too is incidental. They played some NEW songs :: Gr8! :: All you stupid bitches whining about how long it’s taking are going to have to EAT IT.

My meat-space friends were all like :: “Cold War Kids are going to suck … we wanna go see {this, or that, or something other than Cold War Kids}. Um No! They aren’t going to suck dip shits :: dot dot dot C U L8er. They {very kindly} played Hospital Beds :: and stupid drunk people love to scream their EtOH dependent lyrics :: always good for a healthy smile from the smugly healthy.

Perry Belcher, and demons, made their first appearance waiting {front-and-center ftw!} for Band of Horses :: and waiting and waiting :: while Lou Reed ran over 15min on the other stage. I was like, “I hate you Lou Reed! You HasBeen!” And then Perry Belcher was all like, “Yeah man get off the stage!” And then I was like, “Oh No You Didn’t Perry Belcher! Lou Reed is a fucking legend :: You shut your jowly mouth about it PigMan!”

Then Band of Horses came out and totally ruled :: The AssHole Sun was finally gone :: They are so perfectly singable :: And they just KILLED it. When the festival organizer :: And Not-Evil Perry :: came out with Jane’s Addiction on the opposite stage :: They kept going so we wouldn’t get SCREWED! Everyone was up for it :: And it was the best show of mine and Perry Belcher’s awesome show.

I was planing to stay for some of Jane’s Addiction :: Because, by this point, I’m very concerned for Jane :: But I decided to leave the festival thinking about Band of Horses pumping it out over-the-top of Jane’s Addiction :: Totally fucking rock-n-roll! And it’s still what I’ll be thinking about next year when I pay 200 bucks for the mediocre civil engineering :: but masterful music!