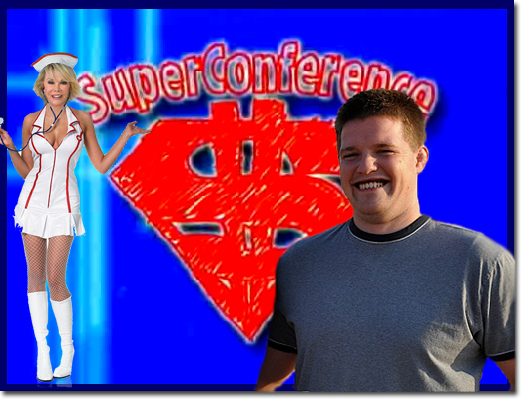 Tired of cutting yourself with razor blades just to feel alive? The mess :: the guilt :: the lies to your mother … stop the insanity! Did you know that there was a less bloody way to make yourself suffer screaming pains? That’s right! No reason to self mutilate when can simply listen to “talking clump of dirt” Russell Brunson speak at the outrageously priced Glazer Kennedy SuperConference …

“Just 5 years ago, with $20 and a simple idea, Boise State student Russell Brunson started an online business - and by the time he graduated, he’d sold over One Million Dollars of products and services from his basement office.’ ABC, NBC and FOX NEWS have all featured his remarkable story - and the fact that he’s helped tens of thousands of people REALLY MAKE MONEY with internet marketing. His own company has mushroomed into a real business (!) with 80 employees… revenues exceeding $250,000.00 A WEEK - he has become legendary in internet marketing. As a pleasant surprise to many, he’s not much of a geek, and freely admits there are smarter techno-folks. He is at the SuperConference to show you how to MAKE MONEY WITH THE DAMNED THING - not to explain the inner workings of the Google® splechedeydocherisms. PROMISE: YOU WON’T NEED A TRANSLATOR TO LEAVE THIS ROOM AND MAKE THAT COMPUTER PRINT MONEY.”

Shaazam!! Russell is on the forefront of not understanding technology and the Internet :: and unlike so many of the posers out there :: he “freely admits” it. In fact :: Russell is so good at sucking at the Internet that he built an old fashioned telemarketing business instead {women need not apply!}.

$250,000 per week :: $13,000,000 per year :: those are impressive figures for a “business” that’s lost more than half of its employees over the last several months. Of course that’s because the figures are totally fraudulent :: and likely double the revenue that was reported to the IRS. Attend the GK SuperConference and learn how Russell does it in a half day segment he calls: “Begging for Trouble” :: and you can too!

There will be dozens of other opportunities this year to hear Russell Brunson stuttering through his laced-with-fraud sales pitch :: but this will be your only chance to pay $2,495 plus $800 per month for at least six months. Holy Leave it to Beaver Batman :: that’s a shit load of money!

Having second thoughts about paying so much just to suffer? Maybe “genius” marketer and obvious fuck wad Dan Kennedy will be able to talk you into it …

“If you are unwilling to make this modest investment in yourself, your business and your future, I suppose that tells us both a lot, doesn’t it? The unwillingness to invest in acquiring information, networking for alliances, search for people and resources to support your efforts and accelerate your progress…in association with the leaders of Glazer-Kennedy Membership worldwide…. in your own personal and professional growth — you’d better have very modest ambitions. Actions speak loudly, to your own subconscious, to those around you, to the world at large. The individual who is intellectually lazy or, bluntly cheap about self-investment sends a message.

If you are unable - really unable - to make this investment, that’s the best argument to be made for doing so, even if you must give up Starbucks, cable TV and, heck, eating altogether and put everything you own plus a few things borrowed from your neighbor up for sale on eBay.”

Huh :: interesting argument. I guess once you make it to the top of the turd pyramid like Dickless Dan has :: you can just be out in the open about your ruthless exploitation. That must be nice … very freeing.

Act NOW before the government starts actually enforcing the laws of these United States :: and this offer runs out FOREVER!

P.S. Dan Kennedy :: great idea using images of Superman to sell your SuperConference. I’ve done you the favor of contacting the DC Comics Rights and Registration department regarding your misuse of their most famous and beloved character to sell your turd-on-toast. No need to thank me :: it was easy.

Good luck with that!