The Truth About Gnomes & Dogs 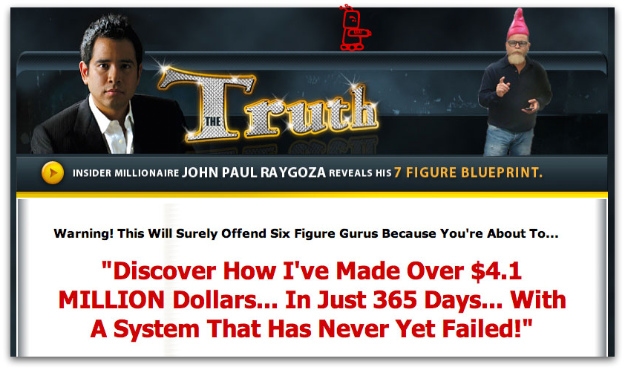 If you hold to my teaching, you are really my disciples. Then you will know the truth, and the truth will set you free.

The J-man’s version of the truth is about putting your neighbor :: your brother :: your wife :: the widows and orphans :: the poor and needy :: the hopeless and the lost :: the children :: and the pimps and the hos … all BEFORE yourself. Your-own-damn-self ranks low on Jesus’ pyramid of stuff to give a crap about {as does gettin’ them big monies} … look it up.

Trouble is :: most people who claim to have {or be} “The Truth” are just stinky turds. The truth is that the truth is complicated :: and you can’t buy the resell rights.

In 2008 “stealth marketer” :: and mega motherfucking asshole :: John Paul Raygoza had the ignorant audacity to release a frauduct called “The Truth” as a way to generate leads for his heartless bloodsucking operations. Raygoza’s version of the truth is all about instant can’t fail easy multi-millions … and you can too!

“To those of faith I say, let those who are without sin cast the first stone. (That one means nothing to someone that is not a person of faith.)”

Hmmm … well I didn’t know that The Gnome was a person of faith … I thought he was just a clueless little dickhole. This changes everything! Starting now :: and into the future :: I shall defer to his superior “faith-based” biblical interpretations.

Subject: can the truth REALLY set you free?

I recently met a stealth marketer by the name of John Paul Raygoza who has made over $4 Million in just 365 days using a formula that he reveals at:

Here’s just a snippet of what he’s about to reveal to you:

He doesn’t leave any stones unturned in this DVD course.

Go see for yourself before he sells out his entire inventory:

And they lived happily ever after {or not}.