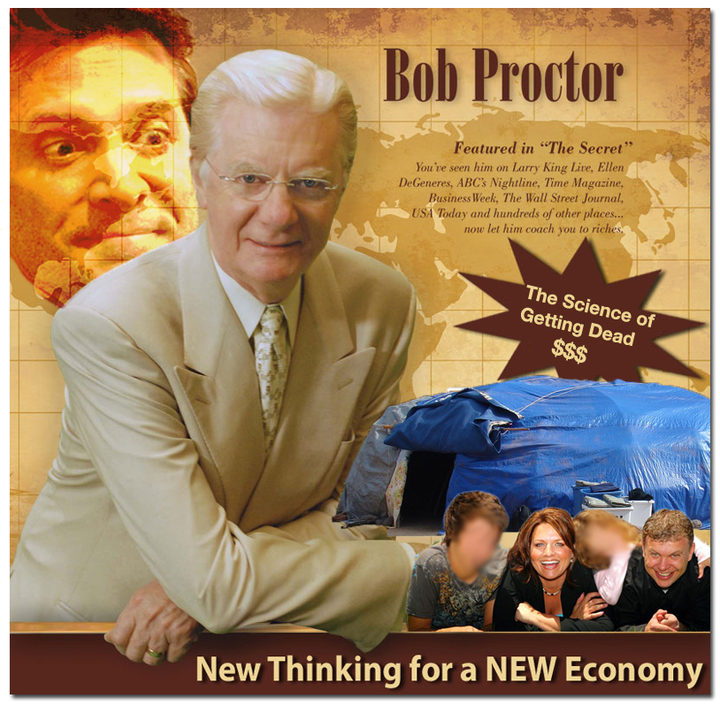 If you’re an avid reader of this fake robot blog :: then that description makes total fucking sense to you {pat yourself on the back!}.

If you’re not an avid reader :: then it makes no sense. But who really gives a shit about you anyway? You can’t spare an hour a week for reading fake robots? Your pants are too fancy? You know about another highlarious anti-crime blog written by a real robot who’s even awesomer? Your obsession with cheap cheeze-burgers has consumed all your free time? Whatever :: don’t answer me :: I don’t care.

The unicorn gods of bullshit chose Bob Proctor to be one of the featured “teachers” in the hit fake movie :: The Secret. An extensive article about the Death Ray situation in last week’s Guardian :: awesomely titled “At the temple of James Arthur Ray” :: quoted Oprah’s opening description of the magical secrets …

“Have you heard about it?” Winfrey asked her millions of viewers, holding up a copy of the book. “My guests today believe that once you discover ‘the secret’, that you can immediately start creating the life you want, whether it’s getting out of debt, whether it’s finding a more fulfilling job, even falling in love. They say you can have it all, and, in fact, you already hold the power to make that happen.”

But the real ‘the secret’ behind The Secret is telling people that they can have it all in order to take everything they have. It’s a time tested strategy that can sometimes be scaled {via fluke or evil planning} to the size of the mass media market. Bob Proctor has been an avid practitioner of the real secret for many years :: blowing evil-tainted smoke up asses since the Johnson administration … or something. 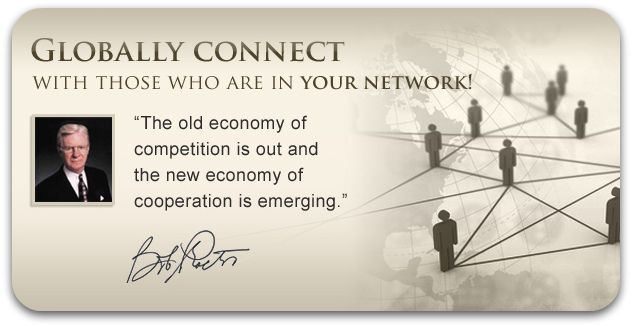 … competition is out! I’ve heard that myself :: he might be on to something.

Another current Bob frauduct is Six Minutes to Success :: I know what you’re thinking :: “six minutes is a long time to wait” :: but just imagine how much more your family will love and appreciate you once you’re successful … and it will make that six minutes feel more like four minutes.

Last year James Ray mailed for the Six Minutes launch :: and I may have mentioned how weak-balls it was that Bob Proctor {and his wannabe Josh Fredrickson bitch Lanny Morton} would continue to accept Death Ray as an affiliate and process his leads. This year Lanny Morton decided to approach The Droid as part of his pre-launch process :: cause you know :: that’s sure to be a good idea …

Subject: say it’s crap with all the info :o)

We are doing a launch this summer and I thought I would offer you an account to check out our site ahead of time so if you decide to rip on it, you can do so with personal experience. (our new site will be ready in a couple weeks)

I’m not assuming we are big enough to get on your radar but you wrote about it last year.

you have a gift with words, that was really funny.

I like to think we do things differently. You won’t find any income claims or testimonials in our sales process. I think we give people a lot of value for what we are charging.

Anyway, would be open to your feedback. Even if it’s negative.

Okay maybe you’re right. Maybe I shouldn’t criticize things I haven’t experienced. Why don’t you give me a free membership in the 3% Club so I can make an objective assessment about whether or not that “product” was as advertised?

Why would you email me with such obvious disingenuousness? Are you crazy or something? Have you not heard the other d-bags talking about what a bad idea that is?

You should think hard about whether or not you want to sink with a ship that you’re not captaining.

Talking to me is fun … I guess. Lanny wants more …

my motive was not “disingenuousness”.

have some fucking standards Lanny.

Well I’m sure at least one 3%er “got off their ass” and put in the required effort. I mean they are 3%ers after all … they were willing to make a scary big investment.

Can’t even produce one suckcess?

Have any comment for the article I’ll be writing about you charging a ton … and then producing nothing {not even a single viable result}?

I hope you’re forwarding this email chain on to Dr. Bob … but even if you’re not … something tells me he’ll have the opportunity to read it. I’m just cool like that. 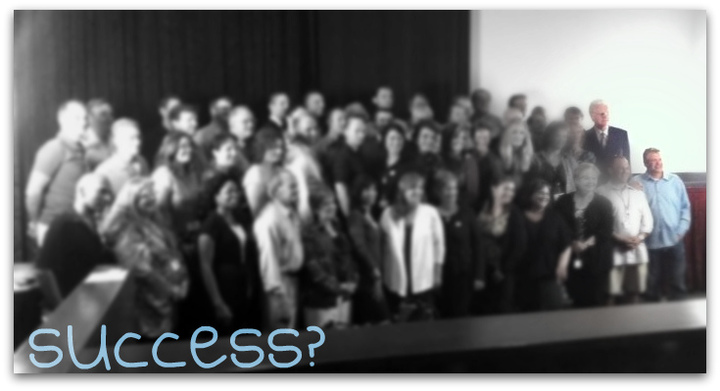 That’s how this game works … ZERO FUCKING RESULTS … and it’s why approaching me is always a bad idea. Zero fucking results is indefensible … so personal denial and public silence remain the only possible strategy for dealing with me. But Lanny :: and many other empty-headed-dickbags … are too stupid to see that.

Lanny gives me the name and number of a 3% Club member who has had success getting off his ass and implementing Lanny and Bob’s super special Internet secrets. Let’s call that guy Chuck because Chuck is not his name. Chuck is down to working just one day a week due to all his awesome successfulness :: says Lanny.

Sounds great! Sounds better than Morton and Proctor are doing in fact :: the student surpasses the teacher … the classic tale. I ask for a link to Chuck’s site so I can check it out before I make the call.

WTF? How is he an Internet success then?

Because in scammer land :: someone is considered a “success” so long as they’re not currently planning on reporting you to the Feds … I guess.

Fuck it. I called Chuck anywayz.

Chuck is not a success. He’s lost an assload of money to Morton/Proctor … and other pigs just like them. Chuck has hopes for future success based on unrealistic expectations :: and Jason asked him to consider the possibility that this whole thing is an elaborate scam … and that old men like Bob Proctor and his dancing pig-boy minion Lanny Morton … have no idea how to succeed on the Internet.

Chuck knows Lanny from Lanny’s other “business” venture :: an MLM energy drink flopportunity called Vemma. Vemma is for people who like their beverages to come with business opportunities. Says Lanny on his caffeine-kool-aid selling homepage …

We have a step by step system for success that anyone can follow. I have already taken 2 people in less than 6 months to six figures and want to do it for a few more.

Before you say, “Yes Lanny and Deena, pick me”, there are some requirements to work with us as business builders:

If you have these 3 things, we will make you successful, guaranteed.

Those sound like {lame} income claims and guarantees :: but I know Lanny doesn’t do shit like that because he just told me so … and what would be the point of bullshitting the Internet’s most kickass bullshit detector?

Morton and Proctor launched Six Minutes to Success in June as planned. Here’s Lanny trying to get more affiliates to mail …

“Conversion numbers are really really good. If you are new to a Six Minutes launch then I want to give you a little crystal ball so you can play around with the numbers. When you are dealing with a $1 trial, it can be deceiving and a little underwhelming..

Some rough calculations I did this morning from last years launch were that the average value for each $1 trial was roughly worth $300 in customer value. Keep in mind, this was with a website that had no upsells inside of it like the 3.0 site has, was far inferior to the new site and no amazing follow up retention stuff like we are doing now. So, you can do the math that if you have 30 sales, you have probably made $4500 in future commissions. (Probably much more, it’s a conservative guess) 100 sales probably will end up being $15,000. Our top affiliate, I estimate has already banked over $88,000 in the first two days in future commissions.”

As James Arthur Ray was being convicted of negligent homicide :: he was simultaneously appearing on the affiliate leader-board for Bob Proctor’s frauduct launch.

Linda Andresano attended James Arthur Ray’s Harmonic Wealth Weekend in The Salty Droid’s home city of Chicago :: along with Colleen Conaway. Linda :: like Colleen :: got LGAT upsold on a James Arthur Ray parasite package that included Spiritual Warrior 2009. Linda had been recently diagnosed with cancer and called JRI to make sure it was okay for her to attend the fasting-no-water-heat-endurance-challenge in her condition. Instead of offering Linda a refund :: JRI says hellz yeah :: come on out. Linda was positioned at the back of the lodge :: and lost consciousness thinking about what a good day it was to die. Her unconscious body was propped against the wall of the death lodge :: dangerously exposing her head to the searing heat. When Michael Olesen tried to get Linda’s body into the safer prone position :: James Arthur Ray shouted him down.

After the heat endurance challenge :: as James Ray sat in the shade drinking :: Lou Caci {himself burned :: lacerated :: and delirious} and Michael Olesen :: helped drag Linda’s body from the tent. Via some kind of miracle … Linda refused to die. She testified that in the days that followed the lodge she was just glad she wasn’t dead :: and she saw that as a kind of James Ray “success”. She was scheduled to attend James Ray’s World Wealth Summit in San Diego :: and even though he had nearly killed her and drove away on a golf cart … she attended in her gratefulness at being alive.