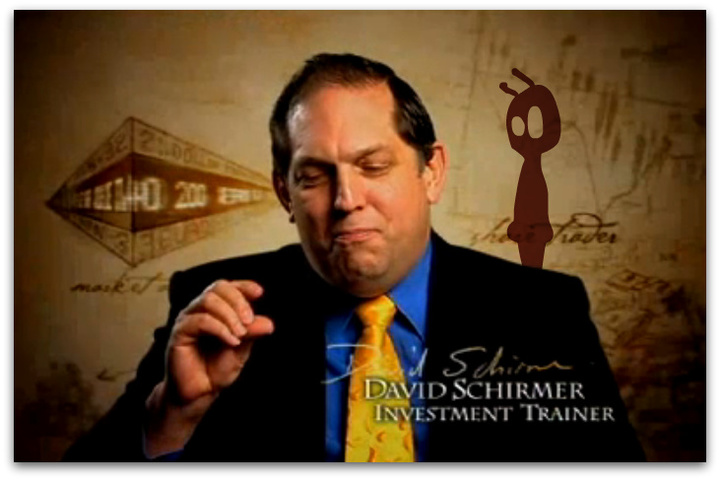 David Schirmer :: blowhard conman :: has been in my blackbook of chubby scummy girlfriends since way back when. The first paragraph of my first post about Schirmer pretty much tells the whole story …

Smart. Somebody around here is fucking smart {hint: not you!}. Make sure to notice the adorable naiveté of early model Salty Droid …

By the next month I had figured out the secret behind The Secret :: Oprah! :: and vowed not to fight it for that same reason {change of plans}. That post also links to a lawsuit between Bob Proctor and David Schirmer. Bob cut Dave off completely :: forbid him from using his company name :: and was awarded $60,000 in damages. Must have been some seedy bullshit going down behind the scenes to induce such an action by Proctor :: seeing as how not even DEAD PEOPLE was enough of an incentive for him to peel himself off of James Arthur Ray’s dick.

Schrimer isn’t too worried about the victims of James Ray either :: he has his mind on more pressing concerns … like me for instance …

“Let’s talk about the James Ray bashers for a moment:

Sadly, in every society, there are a handful of people who are filled with hatred, anger and revenge toward their fellow man. They don’t add to society in any meaningful way by edifying one another or building up their brother; rather they seek to elevate themselves by pulling down every person who seeks to become the best they can be. These people often hid behind guise of journalism or some invisible, untraceable identity on the internet. They say what they want, to whom they want, no matter how untruthful or destructive it may be, and then like true cowards, they run and hide behind their secret identity or television station or media machine.

Some of the filth and utter trash said about James Ray on the internet by people who don’t know him, don’t know what he does, or the circumstance is nothing short of shameful and pathetic. These people who portray hatred through their words rather than show love are murderers – That’s not me saying that, that is what the bible says, “If any of you hate your fellow man you are a murderer.”

But enough about me and how super awesome I am … this post is about David Schirmer :: and how he should be rotting {and thinning!} in prison. This week the Australian Securities and Investments Commission banned David Schirmer from financial services :: FOR LIFE :: The Law of Attraction in Action!

The ASIC publication :: reprinted in full …

ASIC found that between August 2004 and December 2006 Mr Schirmer:

ASIC found that rather than disclosing difficulties he was facing with aspects of the Platinum program, Mr Schirmer chose to deceive Platinum participants and deliberately prepared and provided them with a false document.

ASIC’s action against Mr Schirmer reinforces its commitment to protecting retail investors and financial consumers by removing individuals who don’t possess the honesty and integrity necessary to discharge their duties and obligations as financial services providers.

Mr Schirmer has the right to lodge an application for review of ASIC’s decision with the Administrative Appeals Tribunal.

So in the universe personally manifested by Devil Dave he’s:

They claim to know God, but by their actions they deny him. They are detestable, disobedient and unfit for doing anything good. ~ Titus 1:16