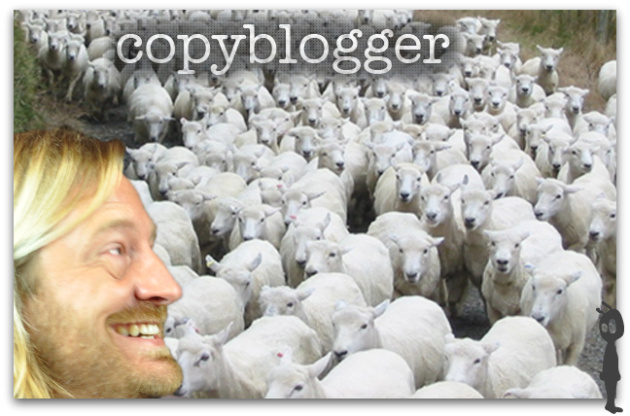 The post was about how Chris Pearson and his Thesis theme were out :: so now Brian and Sonia formed a new company that … OMG SO BORED!

Skip to the comments. Mine sounds like the others … only not.

“Wow! This really is fake exciting for me and my fake personality. I’m just keen as a carrot to see all the great and wonderful things the good people at Copyblogger have in store for us. It’s like a community here. You know? That’s the fun thing. It’s not about money. It’s just about positivity … and a love of blogging … and altruism …. and fluffy fluffy kitty kats. It’s not about the money … definitely not.

I have a blog too. It’s not a big deal or anything like yours. Just hoping to make six or eight or eleven figures. Knock on wood! You gotta believe! Stay positive! And you can too! Etc. Stuff like that. Maybe I’ll give you guys a backlink or something as a thank you for the way you totally changed my life. Not that you need it or anything … but I’d feel better about me if I could say thanks. You know?

For some reason :: this treasure didn’t make the cut. Maybe they have a strict ban on effective sarcasm. Or perhaps they fear that their regular readers/sycophants will be shocked into seizures by writing other than vanilla-extra-bland.

Here’s Copyblogger pushing thousands of sheeple to The Syndicate for personal profit {} [UPDATE :: page deleted … new ] [UPDATE 2 :: deleted again … even newer boring link]. Last time I checked … which was just fucking now … Copyblogger was infested with the praises of The Syndicate and its frauducts.

Brian holds himself up as an expert in blogging for dollars. He touts a “relationship with your customer” style. But he sold his customers out to the mother fucking wolves :: repeatedly. People looked to him for mentorship :: and they were wounded for it … maybe permanently scarred.

If he didn’t know about The Syndicate … then he is an idiot who knows NOTHING. If he knew … then he knew.

Either way :: I know at least one robot who is expecting some fucking answers … and some public apologies/renunciations.