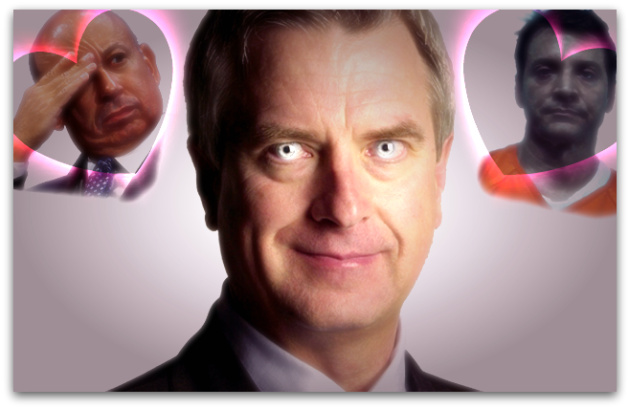 Mark Fabiani is a whoring blowhole. I think :: or maybe it was … Mark Fabiani’s blowhole is a whore. Either way :: he sucks it. Last November when James Arthur Ray hired him to do spin control atop the freshly dug graves of the innocent :: The Droid felt obliged to mention it {bleep}. I thought it was a great post :: full of Shakespearean language and fresh scallops topped with sweet mango chutney :: but you people have no class or sophistication :: and it was mostly ignored {much like Mark Fabiani}. Why read about Fabiani in his boring ass suits when other Death Ray minions are showing off the full glory of their hot tranny asses?

So powerful is Fabiani’s ability to not effect the story … that I never noticed him again. He must be working on repairing James Ray’s public image in a parallel quantum universe {allegedly} :: because in this one he ain’t doing jack shit. James Arthur Ray’s public actions since the DeathLodge have never veered from the swirling path towards the bottom of the toilet. See e.g. :: his twitter stream :: his sham interview with New York Magazine :: and the class action lawsuit brought on by his mistreating and ignoring customers who have already paid for now canceled events. Along with being a slimeball whore without a whiff of fucking ethics :: it seems that the Fabulous Fabiani also SUCKS at his job.

In spite of Fabiani’s best efforts at being irrelevant :: for the last week searches for his name have been driving traffic to the blog :: and that wicked old post is hot. What’s going on?

“But whom does one hire when faced with such an image problem? To help with the gargantuan task of convincing the public that when this big ol’ vampire squid wraps its tentacles around the face of humanity, it’s merely cuddling?

You need an old hand. Someone who can look entitlement and megalomania and incompetence straight in the face and say, “I can work with this.” To that end, the firm has chosen Public Strategies, a Texas-based PR company headed by Dan Bartlett, the longtime adviser to George W. Bush and before that, Karl Rove.”

Sounds like good people :: JAR should give them a call. But they just weren’t enough for Lloyd :: he demands asshole liars from both sides of the political divide. Enter Fabiani … former Democratic insider. But is he? What have you done for me lately? The Clinton administration was a long fucking time ago … get over it! Mr. Fabiani’s most recent client of note is a low life on trial for triple homicide. He lied :: misrepresented himself :: and people died. Fabiani has agreed to help him spin his way out of the consequences of his actions.

It’s not Ray’s/Goldman’s actions that need to change … it’s just the public perception of those actions. See :: the public isn’t supposed to perceive things … it’s trouble. I mean … how would it look if one of the biggest of the “too big to fail” banks was selling its customers broken financial products designed to fail while the SEC was literally masturbating? It wouldn’t look very good … and then things might need to change in the worst way. Do we really want change? No. It would bring too much suffering to all the useless FatCats … and that’s not fair. So fuck-sticks like Ray and Blankfein hire whores like Fabiani {while the dead bodies are still in the mud} to make sure that The People aren’t troubled by useless things like facts … or truth … or transparency … or respect for the suffering of the harmed.

As pointed out by EconomicPolicyJournal.com :: hiring a PR man who has me on the first page of his search results is a pretty sad :: backwards :: ill-informed mistake:

“Private note to Lloyd Blankfein: Let me repeat personally for you. You never, ever, ever hire a PR man that has the above linked to his name on page one, when a Google search is done of said PR man.”

Nope you don’t! Or at least you shouldn’t if you have any fucking clue what’s going on in the world. You also shouldn’t hire a PR whore who is listed as the press contact for a triple homiciding :: know nothing :: con man. But fortunately for justice :: FatCats are completely oblivious to the workings of the Internet :: so they don’t have a clue what’s going down. The facts of the Internet revolution :: like so many other facts :: are game changingly inconvenient for the useless pricks in power. So they spin themselves into delusion :: buy AOL and MySpace :: and remain intentionally ignorant of the very real fact that the cost to instantly distribute information globally has fallen to zero. Spinning and ignoring the facts won’t bring back the victims of James Ray :: it won’t keep the financial system from collapsing :: and it WON’T stop the Internet Revolution {viva la résistance!}.

Enjoy the present bitches :: because the very near future is gunning for your inflated zombie heads.