Sold Out {or not} 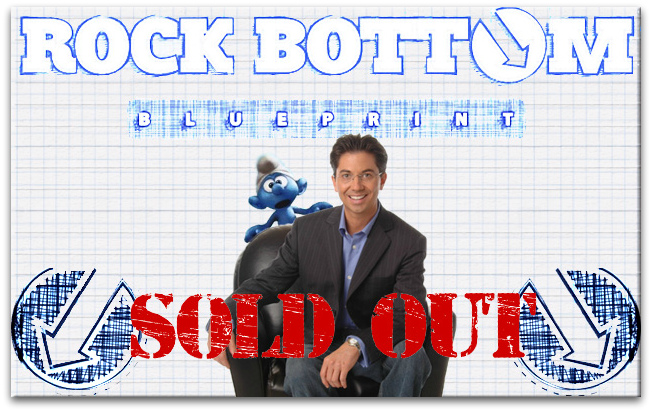 Dean Graziosi named his recent frauduct flop Rock Bottom :: and gave it an “it’s all downhill from here suckers” logo. It would be funny if it was intended to be ironical :: but comic irony is so clearly out of Scammy Smurf’s intellectual range … so it’s just an example of massive stupidity and terrible marketing.

Still :: after a slow start {and middle} Dean managed to “sell-out” of rock bottoms {emphasis original}…

“I’m sure you’re sick of hearing about how many people are jumping in with the Rock Bottom Blueprint, but if I don’t keep you updated, I couldn’t forgive myself.

As I mentioned in an earlier email, we spent some of Sunday and early this morning, reconciling the orders. We found we had some duplicate orders, some canceled orders and to top it off, emotional (and honest) pleas from folks that wanted in but missed the deadline.

So we found a way to squeeze a few more people in and today I opened up some new spots for the Rock Bottom Blueprint.

AND – I CREATED AN EVEN LOWER PAYMENT PLAN!

That’s right! Until those slots are filled, or until midnight, whatever comes first, you have a second chance to get in if you missed the first time around.

But you really have to act now. This isn’t a dress rehearsal.

Seriously people :: if you don’t get screwed out of $2000 RIGHT NOW! :: then you’re losing out on the opportunity to get boiler roomed for even more fake success later.

And the real estate market really is at Rock Bottom … so there’s never been a better time for beginners to start buying properties on heavy leverage. Sure :: the irresponsible country that is home to the global reserve currency almost defaulted :: and had its credit downgraded by one of the shitty rating companies partially responsible for the ongoing collapse. And yes the stock market is taking a dive :: and yes it looks like another recession is beginning :: and yes this recession {like the last one} could easily slide into a depression :: and yes there is still a massive glut of unsold bank owned properties :: and yes new home sales are at historic lows :: and yes a Democratic President has talked about unwinding Fannie and Freddie and the government mortgage incentive system that helped to create and support a 60 year old real estate bubble …

But these are all good signs if you’re a clueless :: uneducated :: little shit stain like Dean Graziosi.

If you haven’t yet, take the swipe copy from yesterday and let your list know we are open just until tonight. I’ll do something really special for the winner of the re-open as well. So you may want to shoot one more out.”

Only a few/infinite slots left!

You can’t lie to your customers like this. You can’t.

Yet the culture of lying is so pervasive that d-bags feel comfortable creating a written record of their duplicitous :: and unlawful :: tactics.

Sometimes the re-open is bigger than the launch itself :: as the mouth breather and the poison launcher remind us …

And the winners are…

1st Place: Greg Habstritt- Winner of an American Classic car or American muscle car or the American Dream. The American Dream being your own 30 minute infomercial, tv ready with testing budget.

2nd Place: Mike Koenigs- Winner of 10 hours on private jet “as if it was yours.”

As a surprise BONUS … everyone on the leader-board just received their own tag on a totally awesome fake robot blog!

Super special congrats to Carol Stinson. Carol was the primary success testimonial for the product :: and oh look she’s also selling it … how convenient.

If the prizes are real and not just a charade intended to trick the B-team into mailing {as is often the case} :: then I hope everyone remembers to pay their taxes on the value as required by law. No need to worry about reporting The Droid BONUS though … that tax tends to levy itself.