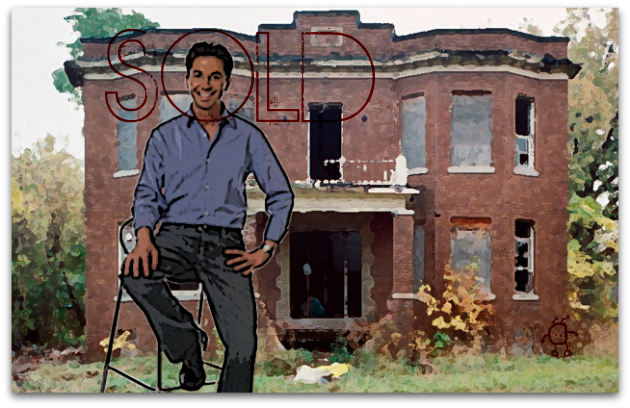 Not being an ass :: but Dean Graziosi sells better on camera than pretty much anyone on the planet right now … says asshole Dean Graziosi about himself … the loathsome and pathetic Dean Graziosi.

Better than anyone on the whole fucking planet! That’s how epic Dean is at the on camera selling. Planetary epic! If he does say so himself … not to be immodest or anything … but he’s the fucking best.

Sometimes though :: like maybe once in awhile :: or always :: he needs to use a couple boiler rooms just to make sure that people had the opportunity to realize exactly how good he truly was at on camera sales. Once they realize it :: they can haz their credit cards maxed out in appreciation.

Some people might call Dean Graziosi a front. A pointless puppet who struts around like he’s the main man :: while in fact not being the main man :: or any man :: at all. But I wouldn’t call Dean a front :: because I don’t think he’s tall enough to be a front … more like a nubbin.

The top nubbin of planetary sales is in the middle of a launch machine launch. Launch machine launches usually consist of four videos :: followed by a non-price-fixed price of $2000. Two thousand for nothing usually seems like a lot :: but in this case it’s a deal as Scammy Smurf explains on the final Rock Bottom Blueprint sales page …

“Separately, many of my successful students have paid over $15,550 for the above information and programs - but when you taken action today, you get it all and a LOT MORE for just a fraction of that! 30 days from now, as your doing your first deal and cashing a check for, $5,000, $10,000, $20,000 or more – you’ll know without a doubt what a STEAL the Rock Bottom Blueprint was for you.You’re ready to make this decision, I know it.”

Other people have been ripped off seven times as badly :: so this is really more like an investment … if you {snort a boatload of cocaine and don’t} think about it.

“When you believe in me (Dean), my entire organization believes in you. With expert help from my team, which you probably won’t need, but it’s there anyway, you can truly build the life you desire.”

Believeth in the Dean :: and The Truth shall set you free … or something.

“But maybe most important of all, you can stop relying on anyone or anything else but yourself for your income and the livelihood of your family. That struggle ends today.”

Four best-on-the-planet videos :: and an offer to end the struggle of poverty :: uncertainty :: and dependence … today.

So this frauduct launch will work :: no problem. It’s never failed before :: according to Irwin :: and Irwin has never been wrong.

“This is new to me but I am thinking sales for some of you are not hitting it as hard as you may be used to.

Could be that it is real estate, could be that they need to really see this can work for ANYONE. Well, here are a few things:

First: My team and I scrambled today and made some key changes that increased conversions by day’s end. We are going to see a jump there for sure.

Second: Live WebCast on Thursday and Saturday. I am literally flying in 11 insanely successful students who are going to show that ANYONE can do this when they follow what we teach.

This is where I come to life and we are going to rock it. Doubts Be Gone!!!

So drive them to the Live web casts so I can get you the checks you deserve for supporting me. ;-)

I steal EVERYTHING from old ladies :: lol … winking smiley face.

I am going to rock the live web cast so push your peeps there. Like I said, I am guessing all your lists except one never got offered real estate so they need more proof. It is coming in those web casts.

Plus, even if you don’t hit record numbers, I am still stuck giving you fu$#ers killer ass prizes. ;-))

Gosh this is fun and funny :: as long as your dead enough inside that you can’t hear the screams of suffering every fucking time you close your guilty as shit black eyes …