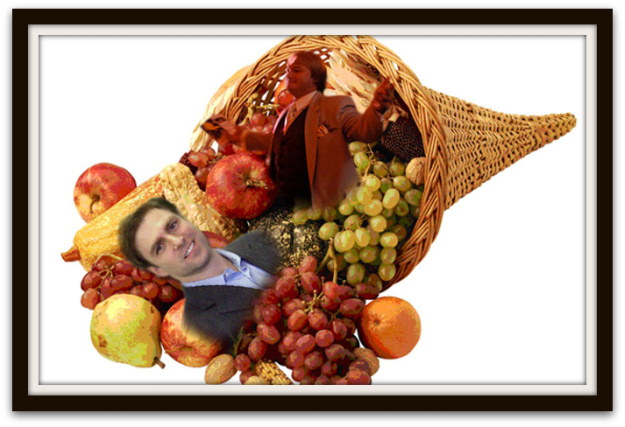 Sometimes cornucopias come stuffed with all kinds of lame ass fruits and yams and shit :: and no one is very interested. The lame-a-tude of the cornucopia killed the still life as an art form :: a tragic fucking loss that we all still mourn. But cornucopias may well experience a renaissance if more people stuff them full of delicious insider info about disgusting pig scammers. I’ve just used cornucopia in four str8 sentences :: don’t like it? :: suck it!

The Droid has been smacking the crap out of StomperNet for a long while now :: A quick recap …

Note: I notice a couple of things rereading these older posts. First :: I’m fucking hilarious. Second :: I swing my axe in too wide a circumference. By calling all of StomperNet a useless scam :: I have indicted dozens of people who have nothing to do with what I’m talking about {and whom I haven’t investigated in the slightest}. Please accept my robot apology if you were one of the people unfairly lumped in with these dickheads. StomperNet is a scam :: but it’s a scam perpetrated from the top by Andy Jenkins and Clifford Bradley Fallon :: its list of victims includes its own employees and affiliates.

Now to the cornucopia :: brought to you by the many “friends” of Brad Fallon.

Brad and Jennifer start a company together. The company gets put 100% in Jennifer’s name because Brad has suck ball credit. As the company’s revenue grows the ownership structure changes several times. Each time the paperwork indicates that Brad has no ownership interest :: but he claims there was a mutual understanding among the other owners that he had claim to half of Jennifer’s share. Brad acts as CEO of the company :: and pays himself $150,000 per year {increasing over time}. Brad does a great job as CEO. Over a very short period :: and in spite of ever increasing revenues :: the company is drained to the point where they are having a hard time making payroll {sound familiar?}.

My Wedding Favors ends up indebted to none other than StomperNet to the tune of $675,000. Some time in 2008 :: My Wedding Favors repays $375,000 to StomperNet … and EVERY FUCKING PENNY of that is taken by Andy Jenkins as a “distribution” {Paragraph #51}.

In September of 2008 Jennifer Fallon files for divorce :: probably her best ever decision. Shortly thereafter :: Clifford Fallon gets forced out of My Wedding Favors by the totally ripped Jennifer :: like the punk ass bitch that he is. It was probably easy to do :: because on paper Brad owns nothing :: and only the paper matters.

Brad wants his “job” back. He wants back-pay for all the time he’s been not working on the business. He wants his half of the massive StomperNet loan. He wants punitive damages. He wants attorney fees.

In summation :: Brad’s only success in life {and the first thing out of his mouth when he’s pitching his bullshit} is actually Jennifer’s success … which he tried {and is still trying} to bollix. Along with stealing from his partners :: Brad Fallon is also the kind of mother fucker who sues his wife for fraud over a business deal!

Meanwhile :: back at StomperNet affiliates haven’t been paid for a long long time. This spreadsheet is StomperNet’s own assessment of the situation …

… The Droid doesn’t understand much of this sheet :: but the take home message is pretty clear. By August of 2009 {a month before the big relaunch} StomperNet was close to $1,000,000 behind on affiliate payments.

And here are StomperNet’s official budget projections from August …

… Oops! Brad and Andy :: guru’s of Internet Marketing :: heroic entrepreneurs :: have built a “successful” web business that is a running a $50,000 per month loss.

Have you been paying big money in order to “model” yourself after the success of Andy Jenkins and/or Brad Fallon? Perhaps it’s time for a re-think. Perhaps Brad and Andy are just lame fucking failures who use and abuse everyone in their lives. The lies will never stop … until you stop believing.

When is NOW the right time for change?